Oxford Nanopore annual losses jumped by more than £100million last year, due to costs arising from its initial public offering and share-based payments.

The DNA sequencing firm, which was listed on the London Stock Exchange in October, reported net losses rising from £61.2million in 2020 to £167.6million last year, as it also incurred extra costs from hiring new staff and expanding operations.

It was further impacted by a significant hit to revenue from the conclusion of a contract with the UK Government’s Department of Health and Social Care to offer rapid coronavirus tests. 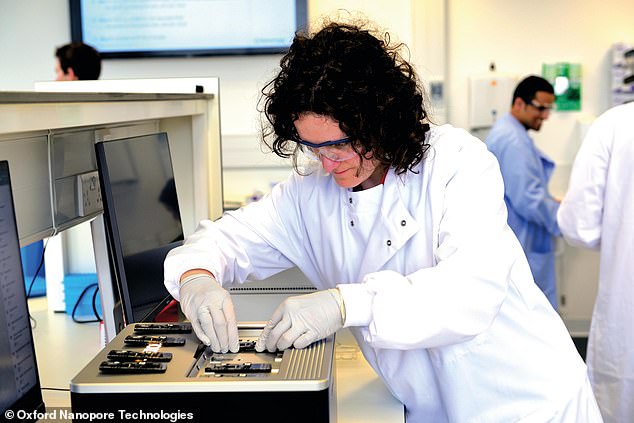 Surging losses: Oxford Nanopore, which was listed on the London Stock Exchange in October, reported net losses rising by £61.2million in 2020 to £167.6million last year

But thanks to sales from life science research tools (LSRT) – products and services for research use – nearly doubling, its total revenue grew 17 per cent to a forecast-beating £133.9million.

Revenue expanded across all regions, with the biggest growth recorded in the United Arab Emirates, where it shot up almost eightfold as a consequence of a partnership struck with artificial intelligence firm Group 42.

Oxford Nanopore’s sequencing technology is being used in the Emirati Genomics Project, an initiative set up by the Abu Dhabi Government in 2017 to understand health problems affecting the UAE’s population.

However, Europe and the United Kingdom remained the largest region by revenue at £40.1million between them, which the company attributed to its growing sales support teams and setting up subsidiaries in France, Germany and Denmark.

There was also strong growth in the Americas and a surge in gross margins.

Following this strong performance, the biotechnology business has upgraded its LSRT revenue outlook for this year to between £145million to £160million, with £190million to £220million expected in 2023.

Its chief executive and co-founder Gordon Sanghera said: ‘We remain focused on our mission to bring the widest benefits to society through the analysis of anything, by anyone, anywhere.

‘The progress we have made over the last year, combined with the new capital raised in our IPO, puts us in a strong position to achieve this goal.’

Founded in 2005 by three scientists as a spin-off from the University of Oxford, Oxford Nanopore grew to become one of a growing number of British ‘unicorns’ – privately-held firms worth at least $1billion.

Its listing in October was wildly successful, raising £428million in gross proceeds and its shares climbing more than 40 per cent on the first day of trading.

The IPO also represented a vote of confidence in the London financial markets, which have often lost out to New York when trying to attract British pharmaceutical and life sciences companies for listings.

Since then, though, the value of its share price has declined considerably from its opening value. Oxford Nanopore shares were down 7.9 per cent to £4.07 this morning.

harrry
Previous articleBill to fix potholed roads soars by almost a quarter to £12.6bn
Next articleStamp duty surcharge: Could it rise to 4% in the spring statement?