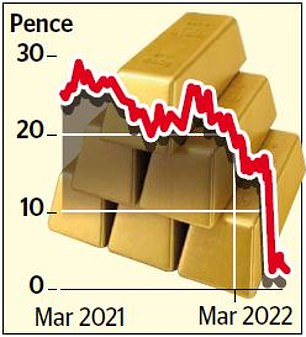 Petropavlovsk faced fresh turmoil after the UK sanctioned its main lender and buyer.

The Russia-focused gold miner has said it is unable to offload its gold or repay a loan because of the inclusion of Gazprombank on the UK’s sanctions list after the invasion of Ukraine.

Shares in the firm tumbled 16.1 per cent, or 0.29p, to 1.5p, meaning its market value has fallen by more than 90 per cent since the invasion last month.

The company, which operates in the far east of Russia, warned it had been blocked from making a £424,559 debt repayment to Gazprombank, one of the largest banks in Russia, after its assets were frozen by the UK.

Petropavlovsk has substantial ties with Gazprombank, an offshoot of the Russian state-backed gas producer.

It is the company’s sole buyer, meaning the sanctions have effectively blocked the firm from selling its gold, which last year amounted to nearly 450,000 ounces.

Petropavlovsk added that restrictions on buying and selling gold in Russia would make it ‘challenging’ to find an alternative purchaser.

The sanctions have also cut the company off from a £152m loan and an £65.7m credit line from Gazprombank.

The firm stressed that none of its businesses were facing sanctions from the UK or the US. Broker Peel Hunt said the sanctions may mean Petropavlovsk would be forced to sell to the Russian Central Bank as a last resort. They added that the Gazprombank asset freeze ‘effectively stops’ the company from being able to service its debts, while also making it ‘considerably harder’ to sell its gold on the market.

The Petropavlovsk stock has lost over 90 per cent of its value so far this year after the invasion of Ukraine sparked a wave of sanctions from western countries that have crippled the Russian economy.

The reaction has caused some of the company’s shareholders to reassess their links with the firm.

Earlier this month, Petropavlovsk’s then-largest shareholder UGC, a gold miner owned by Russian tycoon Konstantin Strukov, sold a 29 per cent stake in the group on the cheap to Sergey Sudarikov, the co-owner of the sanctioned Credit Bank of Moscow.