Property transactions dipped by 13% in January according to official figures, as rising interest rates and cost of living reduce appetite to move


The number of property transactions in Britain dipped by nearly 13 per cent in January, according to the latest official figures.

There were 85,520 house purchases or sales during the month, according to HMRC’s monthly property transactions data – this is 12.6 per cent lower than in January 2021 when there were 97,810 transactions. 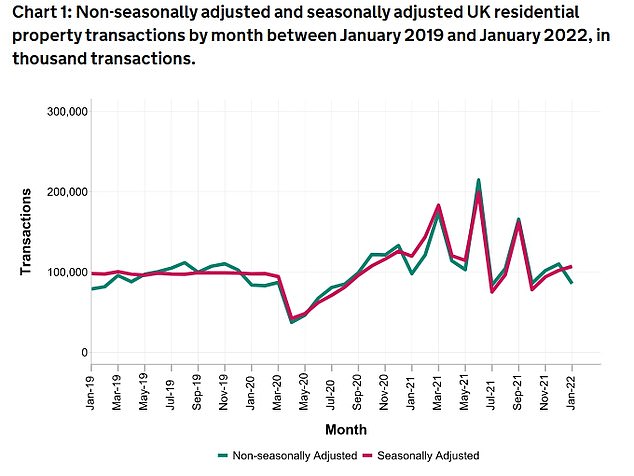 This number of transactions is similar to levels reported before the coronavirus pandemic, such as in January 2020 when there were 83,840 in total.

Experts said that the year-on-year fall was down to rising interest rates and the increasing cost of living, as well as the typical seasonal lull.

Iain McKenzie, chief executive of the Guild of Property Professionals, said: ‘The post-Christmas fatigue has settled into the property market, with a slight slowdown in the volume of property sales we are seeing.

‘With less incentives to buy since the end of the stamp duty holiday, and with some buyers worried about the effects of interest rate rises on their mortgage, this could be affecting this change.’ 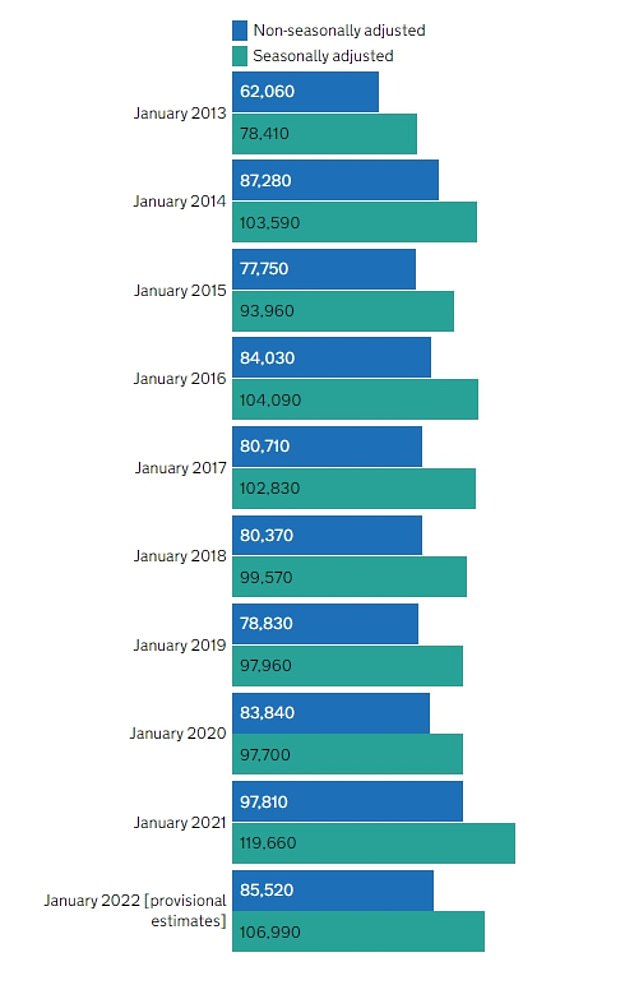 Housing boom: Non-seasonally adjusted property transactions were higher in the first month of 2021 and 2022 than they had been in any January since 2014

Aside from January 2021, last month’s figures were still the highest that property transactions have reached in any month of January since 2014.

UK residential transactions have gradually increased since the summer of 2020, as people looked to move due to lifestyle changes during the pandemic as well as the stamp duty holiday.

The latter in particular led to large peaks in transactions in March, June, and September 2021.

The lack of available properties on the market may also be starting weigh on transaction numbers, as the imbalance between property supply and demand continues.

Lawrence Bowles, director of research at Savills, said: ‘It’s no surprise we’re seeing transaction activity start to ease back. Last year’s stamp duty holiday is now a distant memory, and a slowdown in the number of homes listed for sale means it’s looking more and more like a seller’s market.

‘Figures from TwentyCi show the supply of homes for sale is -10 per cent below the 2017-19 average.

‘As a result, nine out of 10 buyers say that the lack of available housing stock is having a negative effect on their ability to purchase a property.’

This has contributed to higher house prices in the last 18 months, as it created more competition for properties that were available.

Property prices increased 10.8 per cent in the year to December 2021, according to the latest official data.

The number of properties available could begin to pick up as the market moves towards the traditional spring selling season.

Nick Leeming, chairman of estate agent Jackson-stops, said: ‘We are starting to see more listings making their way onto the market however and expect that as the weather warms up and we enter the traditionally busier spring market, we’ll see an uplift in both stock levels and the resulting sales activity from March onwards.

‘For those serious about moving now, it is also very worthwhile speaking to agents about any off-market properties which may be available as there are increases in homes being marketed in this way occurring too.’

harrry
Previous articleNew Ford Ranger Raptor: 10 things you need to know
Next articleBeyoncé Transforms Into “BarBey” With Some Help From Versace