Public opinion is split over the pending 1.25 per cent National Insurance levy, but the social care shake-up it’s meant to fund is unpopular, new research reveals.

Some 34 per cent of people in one poll accept paying extra NI but 38 per cent are against the controversial tax hike, which will kick in this April as people struggle with rising household bills.

In a separate survey, half of adults rejected the social care plan that would introduce an £86,000 spending cap and raise the threshold to start receiving support from £23,250 to £100,000. 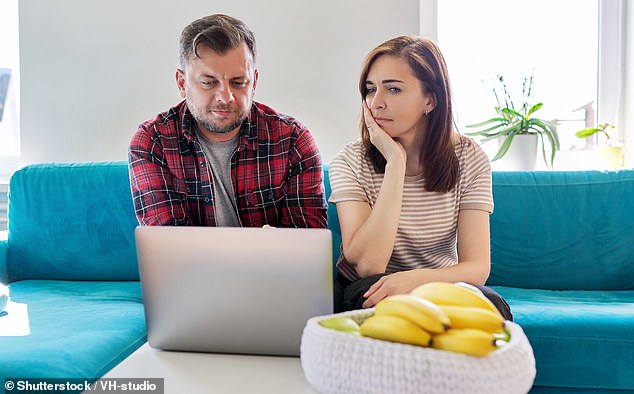 NI levy: Tax hike will kick in this April as people contend with rising household bills

How much extra NI will you pay each year under the new levy? Source: Hargreaves Lansdown

Over the weekend the Prime Minister and Chancellor insisted the National Insurance levy to raise £12billion would go ahead, defying resistance from opposition parties plus some Tory MPs and business leaders.

Critics say that the burden will fall disproportionately on the working population because it will be paid out of National Insurance, rather than by an increase in income tax.

>>>What do YOU think? Vote in our reader polls below

And many have attacked the timing as the cost of living gets steeper, with a 50 per cent hike in energy bills alone anticipated this April.

The headline inflation rate rose by 5.4 per cent in December, up from 5.1 per cent in November, and experts forecast it will hit 6 per cent in the spring.

Boris Johnson’s staunch defence of the National Insurance increase comes as his leadership is in jeopardy over revelations about a string of parties at Number 10 Downing Street during pandemic lockdowns.

However, even if he were ousted, the Chancellor Rishi Sunak, who also strongly backs the levy, is a top contender to replace him. Sunak’s main rival, the Foreign Secretary Liz Truss, has voiced support for it too.

This points to the levy being more likely than not to go ahead. Meanwhile, the public are pretty evenly divided for and against, while a balance of 28 per cent are undecided, according to a survey of 2,000 UK adults by Aegon.

What will the NI hike be spent on?

Should the NI levy go ahead in April?

The levy is earmarked to shore up the NHS after the pandemic and fund a new social care plan.

The latter will involve a new £86,000 spending cap, and a more generous means test where the level of capital at which people become eligible for support will rise from the current £23,250 to £100,000.

However, experts say there is a flaw in the plan and that poorer people could still spend most of their assets including their home if they need care, while the better off would forfeit a relatively small chunk of their wealth.

The new lifetime spending cap will also be based on some, but not all, of people’s private contributions towards care, rather than on their total costs.

It will exclude anything local authorities deem unnecessary or not ‘eligible’ for your care, any financial support they provide towards your costs, top-up payments you might make for premium amenities like better rooms, daily living or ‘hotel and accommodation’ costs, and any spending on care before October 2023.

Half of British adults view the reforms either quite negatively or very negatively, according to a nationally representative survey of 1,500 people by AJ Bell.

Some 36 per cent were very negative, saying they will ‘never’ be able to afford £86,000 of care costs, and 14 per cent were quite negative.

AJ Bell floated alternative care funding plans and found 15 per cent favoured automatic enrolment into a care insurance product, 11 per cent liked the idea of a Care Isa with a 25 per cent upfront bonus, and 11 per cent preferred greater tax-free access to pensions.

However, 41 per cent said none of the options above would encourage them to save for long-term care and 28 per cent preferred not to say.

‘The reforms will be funded through a controversial 1.25 percentage point increase in NI rates for both employers and employees – although this cash is also being used to bolster the NHS.

‘However, the relatively high level of the cost cap appears to be putting people off, with the vast majority saying they view the plans negatively.

‘This comes as the Prime Minister faces growing concern over the timing of the planned NI rise, with some Cabinet ministers reportedly voicing disquiet over the impact it could have at a time inflation is soaring and energy bills are set to skyrocket.

‘This combined with negative voter sentiment will inevitably lead some to push for the changes to be delayed or shelved altogether.’

‘Now is not the time for a tax hike. The spring is already going to be an agony of price rises, with every last penny being squeezed from our budgets. The Government shouldn’t be tightening its grip on our finances at a time like this.

‘We’re wrestling with price rises on all fronts and the Government had the opportunity to make a direct difference to the money we have in our pockets each month by shelving this tax rise.

‘Instead, it has decided to plough on with a tax policy that will hit people at their most vulnerable – and hit those on lower incomes the hardest.

‘There’s no doubt that the NHS and social care need the additional funding, but tax hikes weren’t considered during the peak of the health crisis, and they shouldn’t be brought in at the peak of a cost-of-living crisis either.’