Queen of Tech Cathie Wood squaring up against Crispin Odey

The Queen of Tech Cathie Wood vs Crispin Odey’s short selling: Big investors take sides in the debate on whether tech stocks about to implode

Now Cathie Wood is squaring up against Crispin Odey in the debate that is transfixing the investment world: are tech stocks about to implode?

Odey, 63, is ‘shorting’ shares in an array of tech companies that Wood holds in her Ark funds. In simple terms, he is taking out bets that their prices will slide. 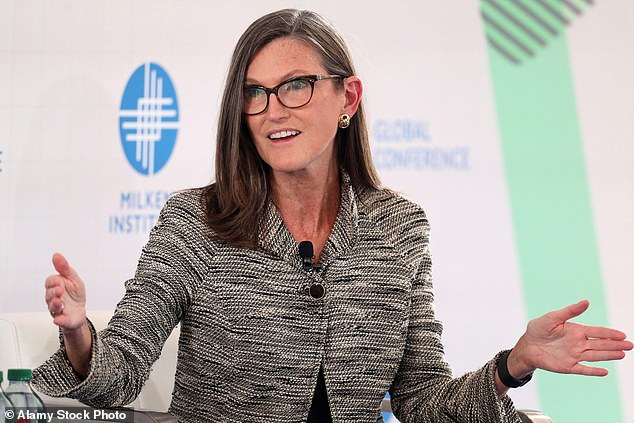 He has taken short positions in a string of tech shares she has backed, including top holding Tesla, Snowflake and Twilio.

Los Angeles-born Wood, 66, has gained a superstar reputation in the investment world as a tech guru.

She was an early investor in Bitcoin and Tesla. The child of Irish immigrants, she founded her fund in 2014 and was ranked one of the world’s 100 most powerful women by Forbes last year.

But American tech stocks have taken a battering amid fears the US Federal Reserve is pulling back its help for the country’s economy. And Odey believes some of Wood’s top picks will continue to fall.

Wood’s fund has been caught in the crossfire.

The investments she managed were valued at nearly $45billion (£34billion) late last year, but this has now almost halved to under $25billion (£19billion). Her flagship fund, Ark Innovation, has lost 27 per cent of its value so far this year. The slump is fuelling concerns her star is waning. James Hanbury, another fund manager at Odey Asset Management, is understood to be betting against Wood’s fund. Odey himself is shorting individual stocks. He told The Mail on Sunday the rise in interest rates is likely to mean the flight to buying less risky investments continues.

Odey said: ‘We’ve had such a long bull market, but people don’t realise how far these things can fall. Many [tech stocks] have fallen more than 50 per cent since September.’

He added: ‘Bigger tech stocks, such as Google, have fared better because they are monopolies. But Governments are now starting to look at these things.’

Tech shares have soared over the past few years, but this has left them looking expensive. The prospect of increasing interest rates has spooked investors. Higher rates mean safer investments such as cash and bonds look more attractive by comparison.

There are also fears some riskier tech companies, which have benefited from cheap finance, will suffer as rates rise. Speculative firms may find cash harder to come by.

Stock markets came under pressure after the US Federal Reserve on Wednesday signalled that it was ready to boost rates in March – for the first time since 2018.

But Wood said last week the selloff of tech stocks had only strengthened her belief in her holdings.

She encouraged investors to sit tight, given her fund’s five-year horizon and the longer-term prospects for technology to disrupt traditional industries.