Rising mortgage rates, high inflation, surging bills and domestic and global economic headwinds will ‘put the brakes’ on rampaging property price growth in Britain this year, according to Zoopla.

By December, Zoopla expects property price growth in Britain to have fallen to 3.5 per cent, down from 7.8 per cent last month.

‘The global uncertainty and volatility resulting from the invasion of Ukraine will have economic impacts around the world, including the UK’, the property portal said. 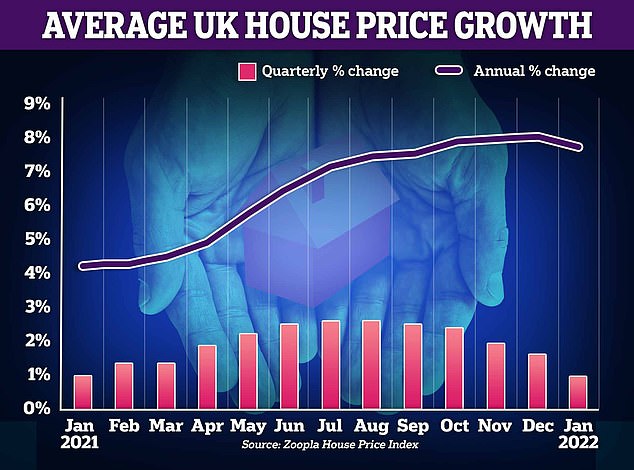 Average UK property prices rose by 0.9 per cent in the three months to January, taking the annual rate of growth to 7.8 per cent, down from 8 per cent in December.

With average prices coming in at £244,100, property price growth was still ‘highly localised’ in January, with Powys in Wales seeing growth of over 16 per cent, while in the City of London, prices slipped 2.2 per cent.

Liverpool has seen prices swell by over 10 per cent to £142,900 in the past year, with Nottingham, Manchester and Sheffield also seeing prices jump sharply.

But, in Aberdeen in Scotland, average property prices slipped by 0.3 per cent to around the £141,100 mark. London remains most expensive, with average prices coming in at £507,100. 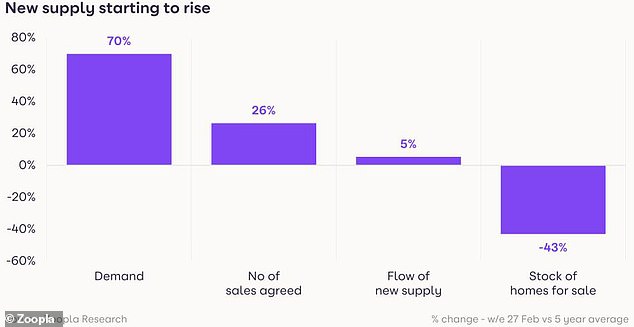 On the up: Zoopla said the number of new listings was starting to rise

Zoopla’s latest findings also suggested that buyer demand started to dampen in January, but new listings were growing, and were now ahead of 2021 levels in every region.

There was a ‘particular rise’ in the number of new listings for family homes, it added.

Grainne Gilmore, head of research at Zoopla, said: ‘The new supply of homes has risen above 2021 levels and is approaching the scale of new listings seen before at this time of year before the pandemic hit in 2020, signalling that the market is starting to move back towards more normal conditions.

‘However, total supply of stock remains tight, which will continue to put upwards pressure on pricing.’

In late February this year buyer demand was still 70 per cent above the five-year average, while the total stock of homes available for sale was 47 per cent lower, according to Zoopla.

But, it said the recovery in the levels of new supply was ‘gathering momentum.’ In January and February, new listings were up in every part of the country compared to 2021 levels.

In areas like the East Midlands, Scotland, the North East and Yorkshire and the Humber, new listings posted over the past two months exceeded levels seen between 2017 and 2020 over the same period.

In the South West and Wales, where there were fewer listings in January and February compared to before the pandemic, home values are seeing the biggest annual rises, Zoopla said. 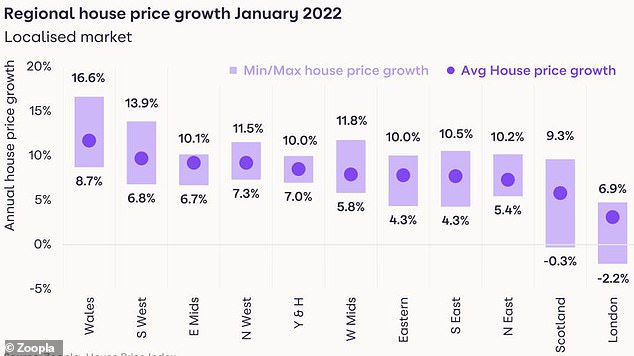 Family homes are typically taking around 23 days to sell after being listed, while a one-bedroom flat in London takes around 53 days from listing to an agreed sale.

Flat prices have risen by 2.6 per cent in the past year on average, while prices for semi-detached homes have jumped by around 9.1 per cent, according to the research.

Last month, the Bank of England raised interest rates for the second time in three months, to 0.5 per cent, and warned that surging energy bills would push inflation higher than expected, to more than 7 per cent by April.

Speculation is mounting that the BoE could vote to push rates up to 0.75 per cent this month, which would have a further impact on buyers looking for a mortgage.

harrry
Previous articleSativa vs. Indica Strains: What to Know Before Looking for Dispensaries “Near Me”
Next articleAll the towns and cities in Britain with planned clean driving zones