Let’s give a big cheer to Kia which has launched the fifth generation of its popular five-seater Sportage family SUV which I’ve just spent a pleasant day driving ahead of first deliveries this week.

All eight engine variants are based around 1.6-litre turbo petrol or diesel, including standard, mild hybrids, and self-charging hybrids, with a plug-in hybrid all-wheel drive due in spring. 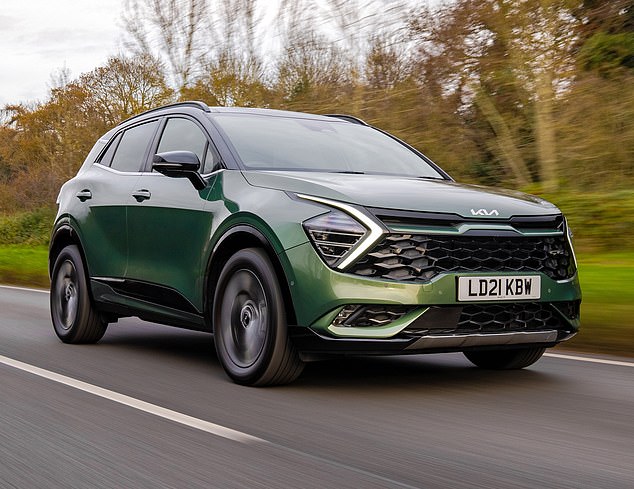 On a roll: Kia’s Sportage, its sales flagship, gets a new generation boost

Paul Philpott, president and CEO of Kia UK Limited said: ‘This is a fantastic achievement for our brand and our dealer network, who have all worked hard to deliver our award-winning model line-up to customers.’

Since its first arrival in Britain in 1995, more than 327,500 have been sold, with the outgoing fourth-generation model launched in 2016 accounting for nearly 200,000 of the total. 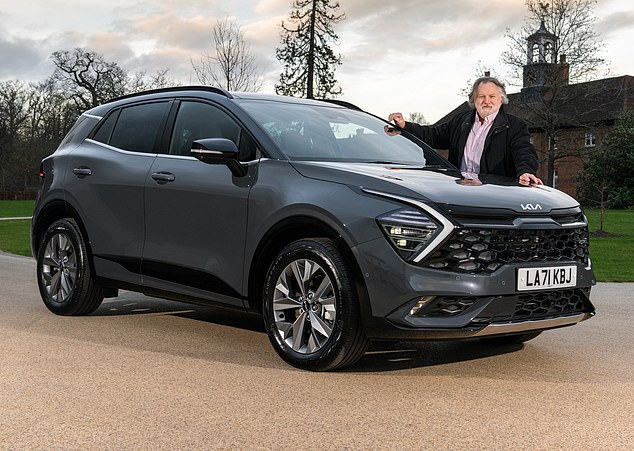 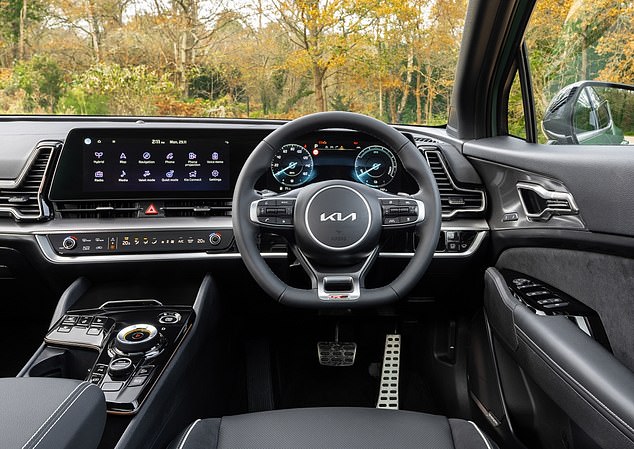 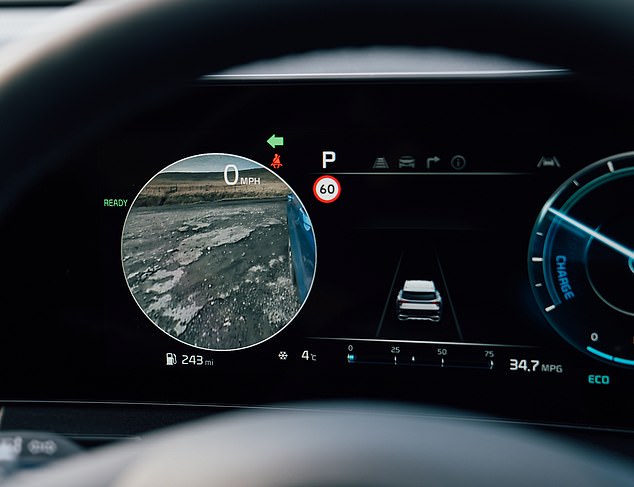 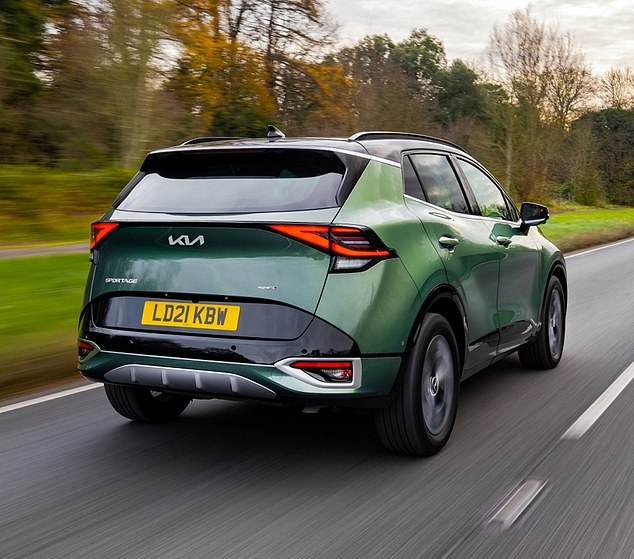 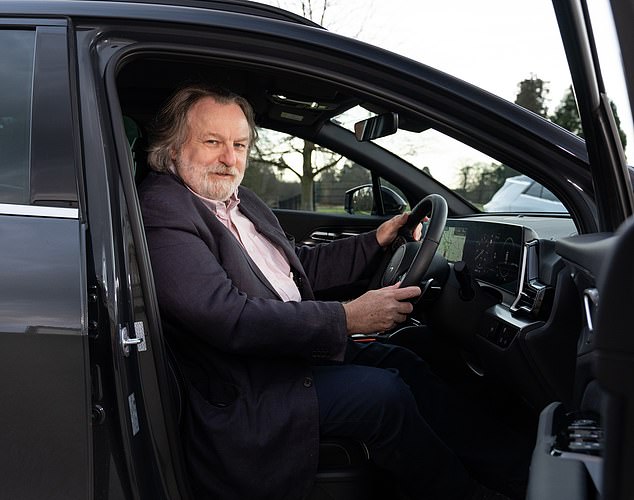 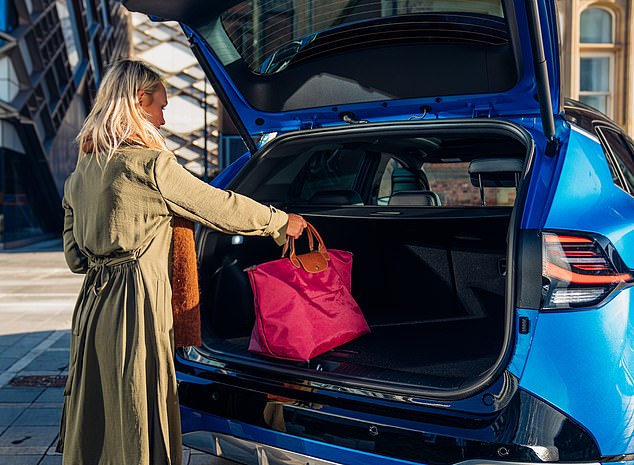 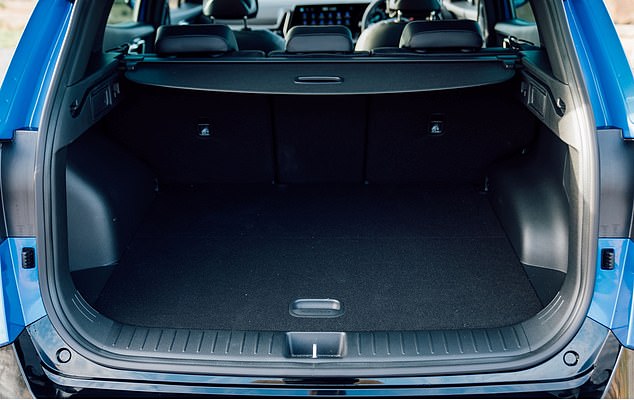 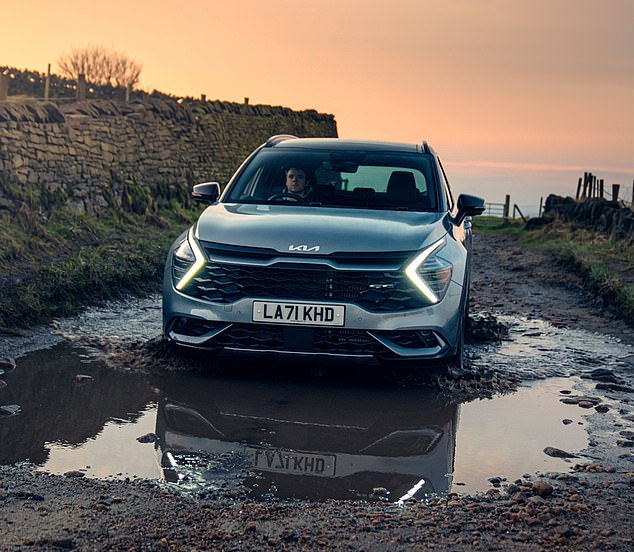 Kia hopes to sell a record 100,000 cars here this year, of which one in three could be fifth-gen Sportages. I drove two versions of the beefy, fully-stocked, range-topping 226 bhp 1.6 GT-Line S hybrid, starting with the front-wheel drive option.

It’s spacious, comfortable, enjoyable to drive and easy and intuitive to master, with supportive seats, a commanding view, a funky twist of design, and some clever tricks up its sleeve including fold-away cup-holders. It’s chock-full with driver-assist and safety kit and features panoramic sunroof and modern interior.

There are just two drive modes: ‘eco’ for everyday driving and cruising, and ‘sport’ for a performance feel. It accelerates in decent order from rest to 62mph in 7.7 seconds up to a top speed of 120mph, where legal. Easy on the pocket, too, with an average 48.7 mpg fuel consumption and CO2 emissions of 132g/km.

I also took the all-wheel drive for a spin, including some light off-roading along a muddy track and field. It felt very together and even more planted on the road. Not for serious off-roading, but it may get you out of a rut at a drenched Glastonbury Festival. 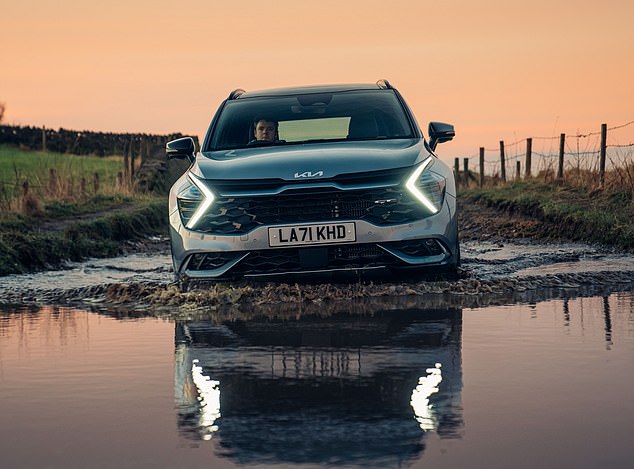 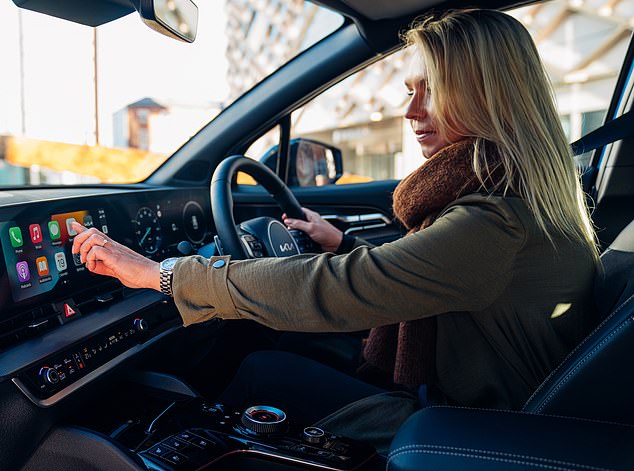 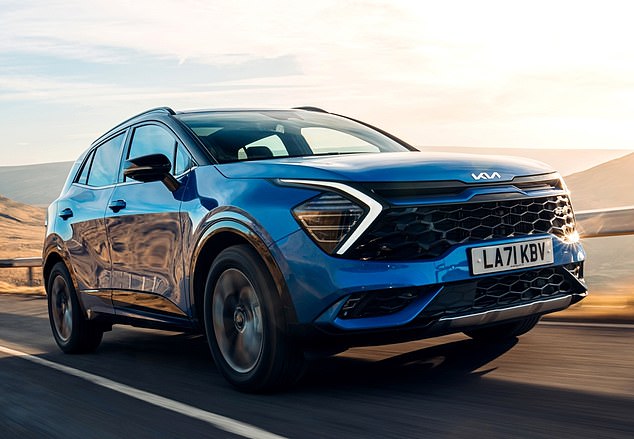 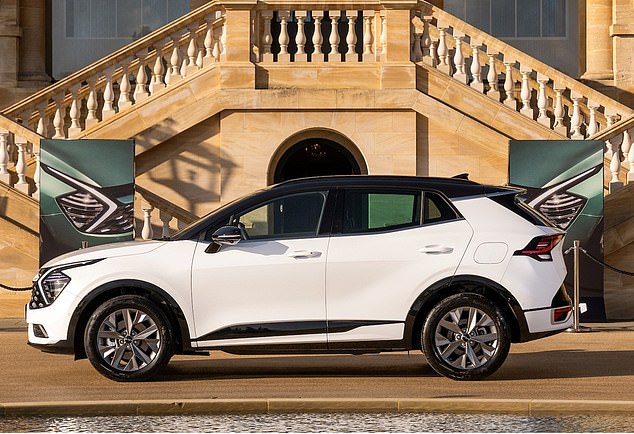 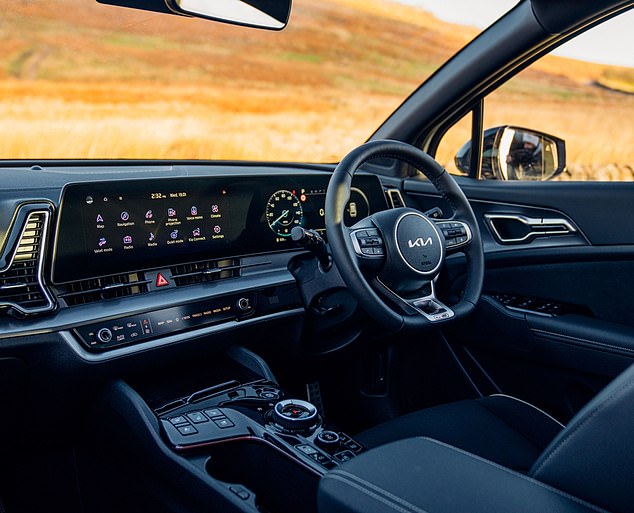 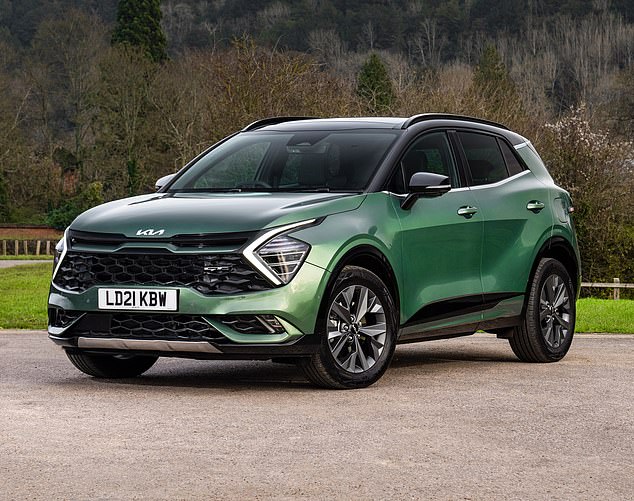 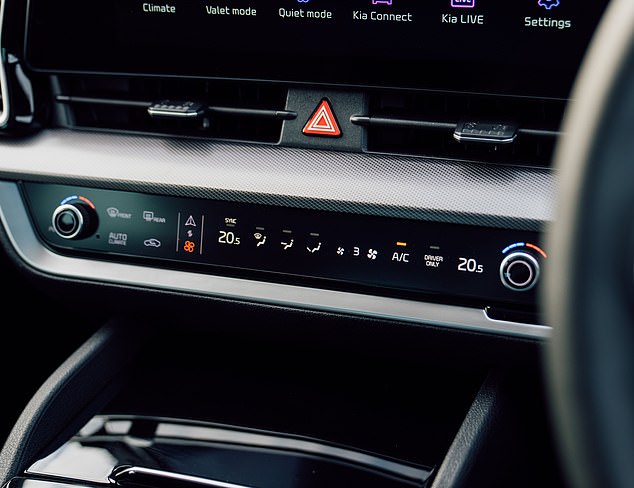 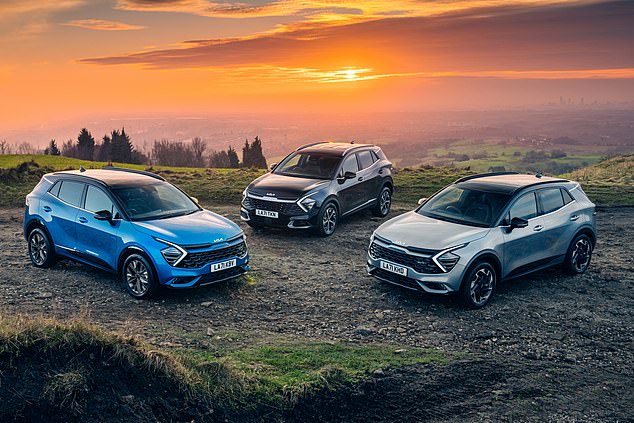 The bottom of the Sportage’s 12.3 inch curved touchscreen has a clever ‘multi modal’ button which, when you press it, gives a different set of touch switches – halving the amount of space taken up.

Press the ‘Terrain’ button on the all-wheel drive version and you can set it for Snow, Mud and Sand.

Behind the powered tailgate is 587 litres of boot-space with the rear seats in place, extending to three times that (1,776 litres) with the seats down.

Not forgetting, of course, the industry-leading seven-year warranty from the Korean car firm that really is getting into its stride.

So all in all a pretty good package from an SUV that’s an engaging and practical drive for families who want value for money but in a car that will also seriously impress the neighbours.

The first generation Sportage sold just under 11,000 in the eight years to 2003. Last year alone, some 27,000 Sportages were bought by British customers.

No wonder the Kia Sportage is Britain’s best-selling vehicle and brand.

Will it fit in my garage?: New fifth generation Kia Sportage

Powered by a mighty enhanced 615hp 3.9-litre V12 Cosworth engine, the new lightweight T.33 is the second supercar from the motorsport and motor industry maestro’s expanding Gordon Murray Automotive (GMA) empire and is expected to accelerate from rest to 62mph in less than three seconds. 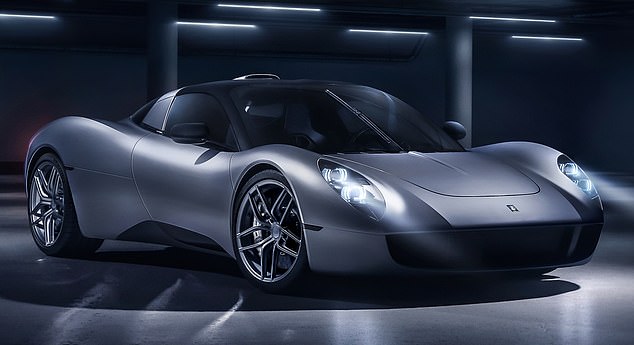 Restricted to just 100 ‘bespoke’ examples for customers, it is to be built at GMA’s new £50million state-of-theart technology campus and global headquarters at Windlesham in deepest, leafy Surrey.

It marks another remarkable chapter in the life of Professor Murray, creator inter alia of the McLaren F1 super car.

Perhaps it isn’t surprising that grey was the most popular colour for new cars in 2021 — for the fourth year in a row, according to the Society of Motor Manufacturers and Traders.

Nearly a quarter (24.8 per cent) of new vehicles were painted in the colour that reflects the sober and serious times in which we live. 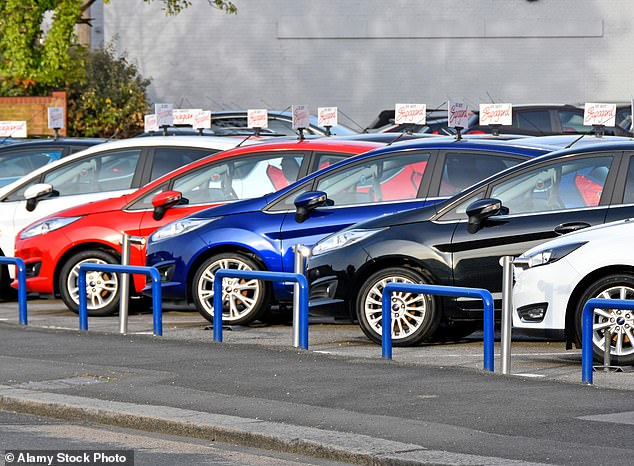 Colour co-ordinated: Nearly a quarter of new vehicles were painted grey – reflecting the sober and serious times in which we live

Grey was followed by black (20.5 per cent) and white (17.2 per cent) — the three monochrome colours together accounting for nearly two thirds (62.5 per cent) of all new cars.

A total of 1.6 million new cars were registered last year as the shortage of semiconductors and the impact of the pandemic affected sales.