The oil price fell by nearly $10 a barrel as talks between Russia and Ukraine resumed and China imposed fresh lockdowns following a rise in Covid cases.

On another turbulent day on financial markets, Brent crude fell from above $113 a barrel to as low as $103.49 in London. In the US, the West Texas Intermediate oil price fell back below $100.

Brent hit a 14-year high of $139 a barrel last week as war in Ukraine raged and despite the fall is still up around 35 per cent this year having started 2022 below $80 a barrel. 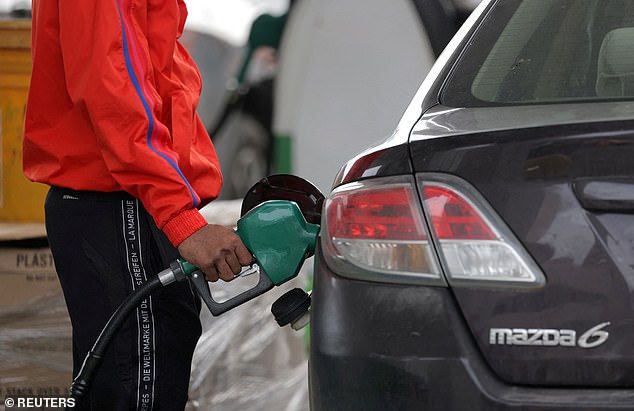 Fuel crunch: Brent crude fell from above $113 a barrel to as low as $103.49. In the US, the West Texas Intermediate price fell back below $100 as talks between Russia and Ukraine resumed

The slide in the oil price came as the International Monetary Fund said Ukraine’s economy could shrink by more than a third this year if the war with Russian continues.

Predicting a slump of 25 per cent to 35 per cent, the watchdog said the estimates should be ‘seen as a bare minimum’.

The financial institution added: ‘A deep recession and large reconstruction costs are to be expected, on the backdrop of a humanitarian crisis.’

Even with oil on the slide, fuel prices in the UK hit record highs as the slump in wholesale costs failed to make any impact at the pumps.

Figures from data firm Experian Catalist show the average cost of a litre of petrol at UK forecourts on Sunday was 163.5p, while diesel was 173.4p.

RAC fuel spokesman Simon Williams said: ‘While there will almost certainly be more rises this week, drivers should soon get some respite from pump prices jumping by several pence a litre every day as oil and wholesale prices appear to have settled.

‘As the oil price has now fallen back, we should hopefully reach the peak and start to see prices going the other way to reflect the big drop in wholesale costs seen at the end of last week.’

AA fuel price spokesman Luke Bosdet said: ‘Unless the price of oil takes off again this week, the AA expects these wild pump prices to stabilise this week and even fall back at fuel stations that were supplied at peak prices but will eventually get cheaper deliveries.’

The war in Ukraine and Western sanctions on Russia have driven oil prices higher amid fears over supplies.

But hopes that talks could lead to a ceasefire and resolution of the conflict have sent oil into reverse in recent days.

China’s decision to lockdown a number of cities including Shenzhen – one of the world’s largest ports and a major technology hub – also dented the oil price as concerns over the state of the global economy mounted.