Retirement is best time to become your own boss


‘I was inspired to set up a pet firm’: Why retirement is best time to become your own boss 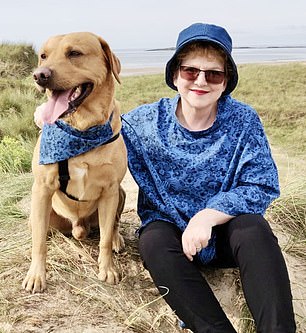 Career: Ex-nurse Kim O’Donnell, with her labrador Leo, was inspired to set up a pet firm

For many, retirement is a time to kick back and relax, but tens of thousands of people are using it as a chance to embark upon a new career. One in five workers aged between 50 and 69 is now self-employed, more than any other age group, according to the Centre for Ageing Better.

The pandemic has also spurred a rise in the creation of small businesses – with a 32 per cent increase in the number of new businesses registered last year, compared with 2019.

Martin McTague is national vicechair of the Federation of Small Businesses. He believes many older workers are well placed to start a new enterprise. He says: ‘Retired people have the benefit of years of experience, a deep knowledge of how businesses operate, and a network of connections built up over decades.’

He adds: ‘For many people, retirement – whether early or not – is often an opportunity to make a long-planned business idea a reality.

‘Suddenly, you have the time and, in many cases, the money to try and get your idea off the ground.’ Kim O’Donnell, 60, from Staffordshire, retired a couple of years ago after a long career as a nurse to set up Leo Charley & Me – a business making and selling accessories for dogs and their owners.

Kim named her accessories business after her two dogs, Charley, a six-year-old spaniel, and five-year-old labrador Leo. Last year, the company generated sales of £18,000 and Kim hopes business will grow this year as several retailers are now stocking her products.

Kim was diagnosed with autoimmune condition Sjogren’s syndrome when she was 54 and her nursing job often made it worse. Being her own boss means she can decide her own hours and work around her condition.

‘To start a business, you need to be a Jack of all trades,’ she adds. ‘One day I can be sewing, the next I might be designing new products, doing accounts, responding to customer requests or planning social media posts.’

Amanda Wheal, 58, from Leigh-on-Sea in Essex, retired from teaching to launch her business, Amanda’s Beautiful Ceremonies, as a celebrant specialising in weddings. It was after her brother’s funeral in 2017 that she decided to train as a celebrant.

In 2020, she left teaching and launched her business. ‘I knew I was starting out during a pandemic when weddings were on and off, but I was determined to make things work,’ she says. ‘As a teacher, I helped people and regularly spoke to large audiences, so I was confident I had some of the skills I would need, but I knew I had to train in other areas.’ Amanda learned the hard way that switching off from work is especially difficult when running a business.

‘I was overworking and not sleeping well because I was so excited and enthused – and it caught up with me and I had to hit the pause button,’ she says. ‘I learned to plan my time with more self-discipline and stick to a schedule.’

Ian McCulloch, 62, from Surrey, spent almost 30 years working for ITV, but instead of taking a step back from work, he started gin business Silent Pool as a retirement project with a group of friends.

‘Retirement age is no age,’ he says. ‘I have friends who were mentally 55 in their 20s. I also have friends older than I am who are as lively and sparky now as they were 40 years ago.’ The business is now generating annual sales of £10million.

‘Many older people eke out the remaining years of their working life with the least risk and cost,’ he says. ‘It doesn’t have to be that way: you know more stuff, you are wiser, and you probably have more access to funding, so go for it. It’s important to stay curious and creating a business is a great way of staying engaged,’ he adds.

When you become self-employed, you must register either as a sole trader or a limited company and file an annual tax return.

You will need to plan how you will fund your business and what will happen when you stop working – for example, whether you will sell it or pass it on to someone else. Your pension arrangements will also need to be included in your business plan.

Helen Morrissey, retirement analyst at wealth platform Hargreaves Lansdown, says: ‘Depending on your circumstances, you may choose to draw your state or other pensions alongside running your own business. But you are under no obligation to do so.’

She adds: ‘Delaying taking your state pension means you receive a bigger sum when you come to access it and leaving your workplace and personal pensions invested gives them extra time to grow.’