The cost of servicing Britain’s ballooning national debt will hit more than £1,000 per person this year, experts warned last night.

In a report that made grim reading for Rishi Sunak, the Institute for Fiscal Studies said soaring inflation will push debt interest payments up to £69bn in 2021-22. That is £11bn more than pencilled in at the Budget in October and up from £39bn last year.

The bill amounts to £1,030 for every man, woman and child in the UK. The IFS also warned debt interest payments will be £12bn higher than expected next year at £65bn. 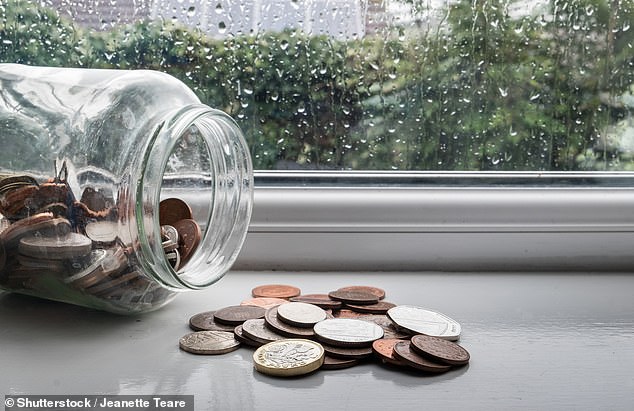 The cost of servicing Britain’s ballooning national debt will hit more than £1,000 per person this year, experts warned last night

The rising cost of the £2.3trillion debt pile is a major headache for the Chancellor as he seeks to repair the nation’s battered finances and free up cash for tax cuts ahead of the next election.

The Government is now spending more on servicing the national debt than it does on most Whitehall departments including defence.

Only health and education command bigger budgets. Mark Littlewood, director general of the Institute of Economic Affairs, said: ‘We are going to be paying the price for many years to come for our reckless borrowing over the last 20 years.’

Debt interest payments have been driven higher by rising inflation. This is because some £506bn of debt is index-linked – which means it is pegged to the retail prices index measure of inflation. 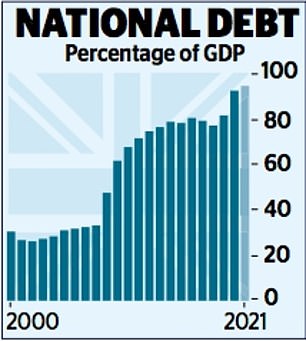 Official figures yesterday showed the RPI hit a 31- year high of 7.8pc last month, well above the forecasts made by the Office for Budget Responsibility in October.

Isabel Stockton, a research economist at the IFS, said: ‘We now project that central government spending on debt interest this financial year will come in at around £69bn. Looking ahead into 2022-23, the October Budget forecast that debt interest spending would be £53bn. The increase in the outlook for the RPI since then could easily add another £12bn to this figure.’

The national debt has ballooned this century – from £354bn in 2000 to over £2.3trillion today – as Labour lost control of the public finances in the financial crisis and spending spiralled in the pandemic.

John O’Connell, chief executive of the Taxpayers’ Alliance, said: ‘These figures should serve as a wake-up call for the scale of the financial challenge facing us.’