Investors face a tumultuous start to the week as the war in Ukraine takes its toll on the rouble, Russian stocks and British oil giant BP.

Russia’s currency looks set to plummet after the West committed to cutting off a chunk of the country’s financial system from the global Swift network.

Shares in Russian firms and those exposed to the country – including the likes of Roman Abramovich-backed Evraz on the London Stock Exchange – are also likely to come under serious pressure. 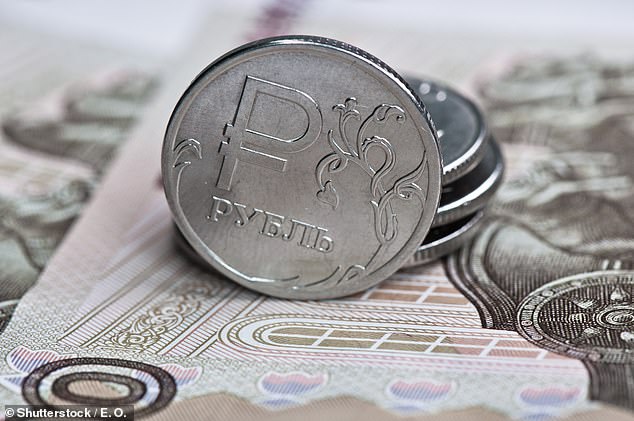 Under pressure: Russia’s currency looks set to plummet after the West committed to cutting off a chunk of the country’s financial system from the global Swift network

BP and its chief executive Bernard Looney will also be under the microscope after it ditched its 20 per cent stake in Rosneft for which it is expected to take charges of up to $25billion.

As Vladimir Putin put Russia’s nuclear deterrent forces on a state of high alert, financial analysts warned of turmoil on the markets.

Hargreaves Lansdown’s Susannah Streeter said: ‘The decision to exit the Rosneft stake will be an eye-wateringly expensive one for BP, but the board clearly felt they had no option but to pay the high price and distance the business from Russia’s aggression.

‘This move is set to further jolt financial markets, with a fresh wave of anxiety expected following the frightening rhetoric from President Putin.’

The value of the rouble came into sharp focus over the weekend after western governments set out a package of unprecedented sanctions.

They included a freeze on the Russian Central Bank’s assets and a commitment to remove the country’s financial institutions from Swift.

Chief market analyst at Markets.com Neil Wilson said there is a huge amount of pent-up stress’ and uncertainty after the latest developments. He said: ‘The Russian invasion, and the way in which the cards have fallen since, has raised the spectre of huge uncertainty.’

A joint statement from Europe, the UK, the US and Canada on Saturday said they were looking to ‘further isolate Russia from the international financial system’.

The latest barrage of sanctions was unleashed in response to the continued Russian assault on iv and other Ukrainian cities.

AJ Bell analyst Russ Mould said it was a ‘logical expectation’ that the Russian rouble will fall in response to the latest sanctions.’