By Alex Lawson For The Daily Mail


Royal Mail employees have been told there is ‘no hiding place’ amid a root-and-branch review of its operations in the wake of a car crash Christmas.

Managers have been urged not to ‘block’ efforts to improve its service ahead of a major overhaul this week.

The 500-year-old postal firm caused outrage with delays across the country over the last two months. Some Christmas cards were delivered in mid-January. 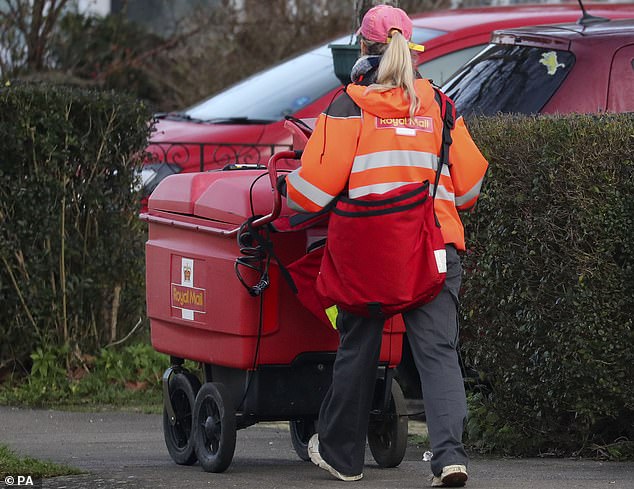 Festive fail: Royal Mail has caused outrage with delays across the country over the last two months. Some Christmas cards were delivery in mid-January

Regulator Ofcom said it was ‘concerned’ by the situation and told Royal Mail to ‘improve its performance as the effects of the pandemic subside.’

In a statement endorsed by Royal Mail, Terry Pullinger, from the Communications Workers Union, told staff that the quality of service had been ‘unacceptable for customers’ and ‘massive activity’ will begin this week to address the situation.

In a video seen by the Daily Mail, Pullinger said: ‘This plan, mobilising everyone, each division, will now start analysing what’s going on, what offices are failing, prioritise support. ‘Get in there and get it right. There can be no excuse, there can be no hiding place.’

Pullinger said employees had cited a string of issues leading to poor service.

These included recruitment headaches, problems emerging from attempts to rework posties’ routes and absenteeism. He said the review would help to ‘establish fact from fiction’.

He also urged middle managers to allow a devolution of control to its 1,200 delivery offices.

‘Our whole vision for the future is about decision making at local level, getting down to the coal-face,’ Pullinger said.

‘Our vision is to grow this company, to reinvent Royal Mail for the next generation but we’re not going to do that successfully unless we do it from a foundation of excellent service.’

Pullinger said lessons learned from better performing offices would be implemented in those that are struggling.

Royal Mail chief executive Simon Thompson, who took over last year, admitted in a video to staff in early December that it did not have enough vans to deliver mountains of Christmas presents.

The Omicron outbreak then crippled its service, with 77 offices reporting delays to deliveries due to sickness and 15,000 employees absent. The situation has improved since. Earlier this month, 700 managers were made redundant in a restructuring.

The move triggered a £70million charge, causing the company to trim its profit outlook. Thompson has also been trying to stamp out bullying within the former state monopoly.