RUTH SUNDERLAND: Banks cannot defeat tanks, but they can inflict a lot of damage, intentionally or not, as we discovered in the financial crisis


Vladimir Putin was not expecting the heroic resistance his troops have encountered in Ukraine.

He was probably also taken aback by draconian financial sanctions from the West, which he seemed to think was too greedy and corrupt to weaponise the financial system against him.

Banks cannot defeat tanks, but they can inflict a lot of damage, intentionally or not, as we discovered in the financial crisis. 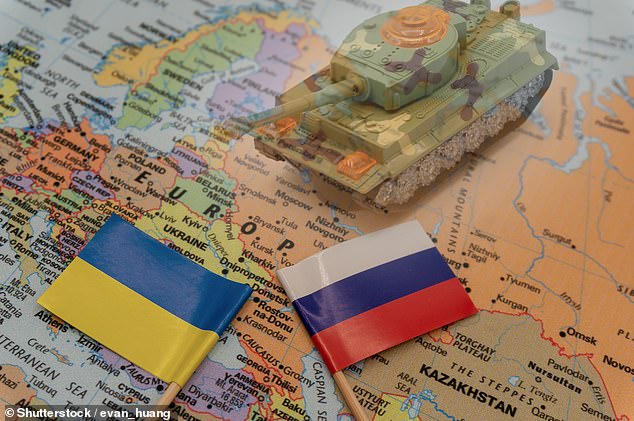 Mapped out: The French finance minister Bruno Le Maire has said we are waging ‘total economic and financial war’ on Vladimir Putin

Sanctions will enfeeble the Russian economy and starve the Kremlin of money it craves to finance its aggression, albeit at a significant cost to ourselves.

Immediate damage came in the form of a falling rouble, despite the doubling of interest rates to 20 per cent. Inflation has risen from 8.84 per cent to 9.05 per cent and Moscow’s sovereign debt has been downgraded to junk.

Russians have been queuing at bank machines and panic buying flatpack furniture at Ikea before its stores shut.

The hardships of living in Putin’s siege economy will be much more serious than being unable to buy a Billy Bookcase. The hit to national income could be as much as 14 per cent if the West curbs energy imports.

Putin is prepared for sanctions. He has built a war-chest of 2,300 tonnes of gold and $630billion (£476billion) of foreign reserves – equivalent to nearly 40 per cent of Russia’s national income last year. The economy has a budget and current account surplus.

But the freeze on the central bank means Putin’s ability to deploy his reserves to shore up the rouble is drastically constrained. If, as looks likely, sanctions are widened to cover energy exports, it would choke off the flow of hard currency. Those surpluses could evaporate fast.

Rampant inflation could soon be eating up the savings of the middle-class and consigning the less prosperous to penury.

For the economies of the West, the major conduit of pain is energy costs, especially for lower income households.

Higher bills mean consumers will have less to spend on other items. This will crimp growth as we emerge from the pandemic.

Putin’s assault on Ukraine has highlighted how heavily the EU relies on Russian gas, a dependency that now looks very unwise. The same is true of the UK, though admittedly to a far lesser degree.

The International Energy Agency argues that it is possible for the EU to reduce its Russian gas supplies by more than a third in a year, mainly by increasing storage and accelerating green energy projects.

In the UK, one sensible measure would be to sign long-term contracts to ship in liquefied natural gas from non-Russian suppliers. We should also move faster on making our housing stock more energy efficient.

Financial sanctions have a mixed historical record of success.

Conceivably, sanctions could encourage the people of Russia – and the oligarchs – to topple Putin. But they could also enable him to paint himself as a victim and to rally his citizens behind him.

The only comparable scenario to the sanctions is the recent freezing out of Iran from the Swift payments messaging system. It is a discouraging example.

US sanctions of one form or another have been imposed there since the 1979 Islamic revolution. They have succeeded in isolating Iran economically, but not in persuading it to alter its behaviour.

The US embargo on trade with Cuba, imposed 60 years ago and still largely in place, also failed to bring regime change.

The French finance minister Bruno Le Maire has said we are waging ‘total economic and financial war’ on Putin. It is likely to be a long campaign, not a quick victory.

harrry
Previous article
It might be red but Ferrari’s 296 GTB is its latest green supercar
Next article
Business titans rake in £ 7.5m from Russia ties