Sage has become as much a part of Newcastle as Brown Ale, stotty cakes and St James’ Park. An unlikely achievement, perhaps for a FTSE100 software company, but one of which its boss, Stephen Hare, is extremely proud.

The company, the market leader in technology helping small and medium firms run their finances, was founded in 1981 as a spin-out from Newcastle University.

It is probably as famous, though, for backing the Sage Gateshead music venue, whose gleaming curves grace the south bank of the Tyne and can cater for more than 2,000 concert goers. Other British tech firms are threatening to shun the UK but Hare believes Tyneside is every bit as good a home for tech as Silicon Valley. 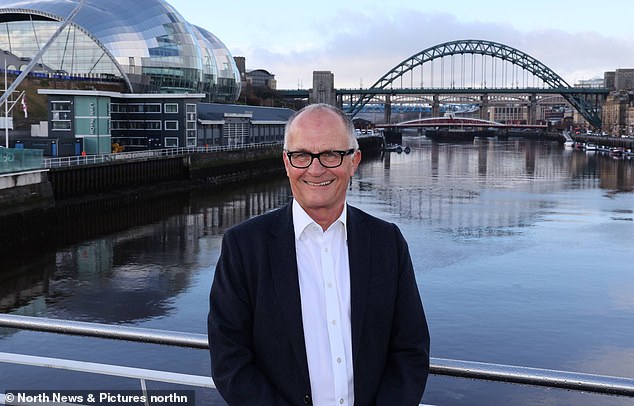 Down in London, the City has been riven by controversy over the future home of Cambridge-based Arm, the world’s leading chip designer. Arm’s Japanese owner wants to list its shares on the Nasdaq market in the US, spurning the UK.

But Hare, 60, pours scorn on the implication Britain is an inferior home for tech. On the contrary, he insists the Tyneside base is an intrinsic part of Sage’s success.

‘The culture at Sage is amazing. We come from the North East and we are proud of our roots. Our culture is not purely transactional and based on money.

‘Heritage matters. Where your roots are matters. In the US, it is quite common for wealthy people to buy a sporting franchise and move it somewhere else. I am a rugby fan, but can you imagine someone trying to move Newcastle United football club to a different place?

‘It is a ludicrous concept. Sage is rooted in the same way. We serve small businesses and our customers care about these things. If we uprooted from the North East, it would be seen as a betrayal. People would see it as motivated by greed. It would be difficult to justify why it was in the customers’ interest.’

Having begun life as a start-up, with a team of Newcastle University students developing software, Sage is now valued at £7billion. It employs 11,000 staff worldwide, including 3,000 in the UK, of whom 2,000 are in Newcastle.

In the UK, 43 per cent of businesses pay staff via Sage products and a quarter of UK employees – seven million people – are paid via Sage.

But if a wealthy overseas bidder came along, offering a fat price to take over Sage, what would he do?

‘If we had an opportunist approach which significantly undervalued the potential of this company, I would fight very hard.’

‘You get informal approaches all the time to test if you are open to it. When I get them I just say no.’

His software engineers in Newcastle are, he says, ‘as good as anyone in Silicon Valley’, the Californian epicentre of tech. ‘We are putting our money where our mouth is,’ he adds, by investing in a series of initiatives in the North East to help young people gain skills in science, tech, engineering and maths. ‘There are brilliant people here who are somehow not achieving their potential. We mustn’t give up on them.’

He is too diplomatic to criticise Arm’s owner directly for giving the UK market the cold shoulder, but it is clear where he stands. ‘I would love to see Arm listed in London.

I would love to see lots of tech firms listed in London.’

He sees no need whatsoever for Sage – and by extension other software companies such as Arm – to chase a Nasdaq listing. There are no guarantees of a higher valuation in the US, he says, citing examples of shares that have fallen sharply, including exercise bike company Peleton.

He also pooh-poohs the widely-peddled claim that the US is less heavily regulated. ‘It is the country that introduced Sarbanes-Oxley,’ he says, referring to draconian laws brought in to stamp out accounting fraud after the Enron disaster. ‘It may be easier to get your listing. But once you are listed, it is not a bed of roses.’ Warming to his theme, he says: ‘We can do anything we need with a London listing – it is never a problem. We don’t have a Nasdaq quote and don’t feel the need.’

Hare himself is a Northerner, not a Geordie but a Yorkshireman, born in Withernsea in the old East Riding. Aged six, he moved with his parents to Hong Kong but returned at the age of 11 to go to boarding school in Pocklington, near York, close to where he now lives.

After studying economics and accountancy at Liverpool University, he joined audit firm EY before moving into industry.

He earned his spurs as the finance chief of telecoms company Marconi, joining in 2001 just before it became a spectacular casualty of the dotcom crash. ‘It was very hard but I learned a huge amount, which is what you often find in adversity.’

After a few years running his own consultancy, he became finance director of industrial company Spectris, followed by a stint at engineering firm Invensys.

‘They never accept barriers. There are a lot of barriers and I think people also create their own.’

He doesn’t answer when asked about his personal barriers, but responds obliquely.

‘The cleverer you are, the greater your inclination to see other people as slowing you down. With supersmart people they just sometimes don’t have the patience to take everyone else with them.’

Sage’s relationships with small and medium firms mean Hare is uniquely placed for insights into how they are faring.

It has conducted research, which will be published tomorrow showing that a new generation of ‘toughened up’ entrepreneurs has emerged from the pandemic.

Having survived Covid-19, they have gained in self-confidence, but are fearful of inflation, and now no doubt of the consequences of Russia’s aggression against Ukraine.

Almost 80 per cent of small and medium firms in the UK expect to return to pre-pandemic profitability in the next 12 months.

But more than two thirds are not yet operating normally and a minority of 10 per cent, or 650,000 firms, are at urgent risk of going out of business.

This, in theory, would put 1.1million jobs in danger – though unemployment is at historically low levels and there are record numbers of vacancies.

‘Where Government can help is to encourage investment in digitisation. The pandemic has shown how important that is,’ he says.

Firms have, Hare adds, ‘demonstrated incredible resilience throughout the pandemic. But their confidence cannot be mistaken for invincibility.’