Sir Martin Sorrell is used to being on the front foot, so the events of the past couple days will have rattled him.

Trouble started late on Tuesday afternoon when his deal-hungry acquisitions vehicle S4 Capital put out a statement saying its auditor PwC refused to sign off on the company accounts.

It was the second time in a month S4 had delayed its full year results and the announcement sent shivers through the City as shares crashed by a whopping 36 per cent. 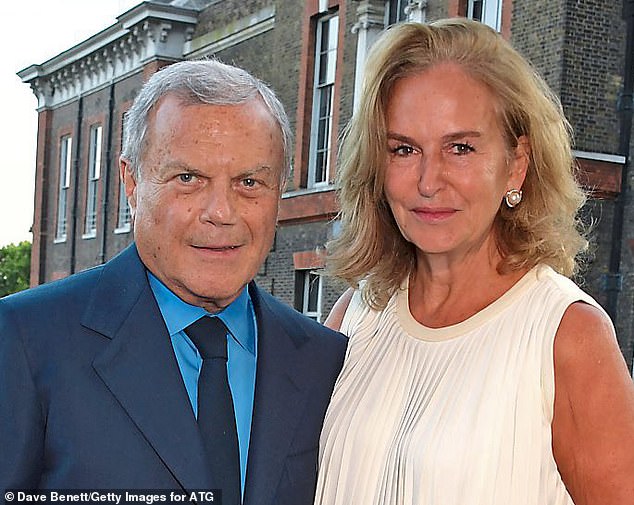 Fast mover: Sir Martin Sorrell, who has been romantically linked with literary agent Caroline Michel (pictured together), has seen the value of his stake fall by £105m

The sell-off continued apace yesterday – down 6.8 per cent, or 21p, to 289p – as rumours circulated about the extent of the audit problem.

S4 was tight-lipped over the issue. But it did say the delay this time was not because of a shortage of available auditors at PwC – the excuse given on March 1 when the accounts were first pushed back.

Jessica Pok, media analyst at Peel Hunt, said: ‘There’s a black hole of information at the moment feeding the speculation frenzy. There is no explanation from the company or PwC. But the feeling is that it is something big.’

The uncertainty has cost S4’s shareholders – including Sorrell – a fortune. The value of the company has tumbled by £1.1billion in the past two days to £1.6billion – taking losses since shares peaked in September last year at £3.2billion.

Sorrell, who has been romantically linked with literary agent Caroline Michel in recent months, has seen the value of his near-10 per cent stake fall by £105million since Tuesday’s announcement – leaving his holding worth £157million. That is down from £472million in September.

So what has gone wrong? The most popular theory among analysts is that PwC is unhappy with S4’s acquisition strategy and is questioning how the group integrates new companies.

A source close to Sorrell said: ‘Martin moves fast. He focuses on the top and bottom line. But it is difficult bringing a new company into the fold. They have to be integrated into the same systems and internal controls.

‘It is not Martin’s strength. It is often the case of do deal the first, due diligence second.’

If so, it would not be the first time Sorrell has been slapped on the wrists for his merger-and-acquisitions strategy.

In September last year WPP, the advertising giant he set up in 1985 but left in 2018, paid £14million to settle charges over bribery of Indian officials.

The Securities and Exchange Commission in the US accused WPP of poor accounting controls after a business it had bought in India was found to have paid bribes to secure government contracts. 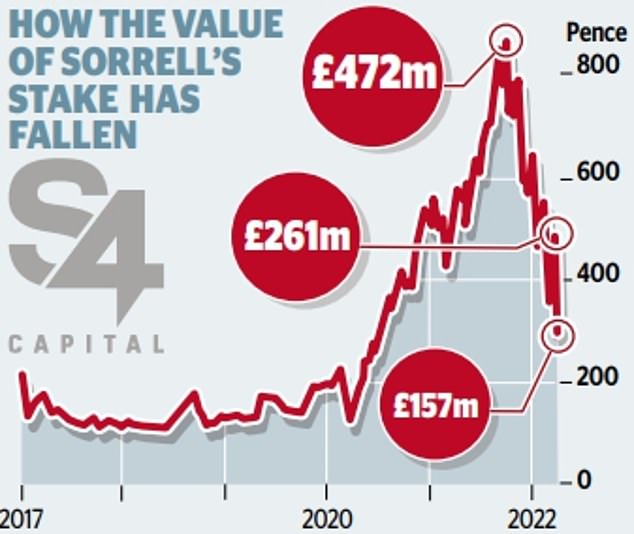 Sorrell was in control of WPP at the time.

Fears among investors are that he is spending too much money going after blue-chip clients, including hiring staff and buying technology.

One media analyst said: ‘Martin was bringing in blue-chip clients into a business that was not used to servicing them.’

The incident has echoes of Sorrell’s departure from WPP when out of the blue the entrepreneur announced he was stepping down from the company he built up from a maker of wire baskets to one of the world’s most powerful advertising groups.

His departure followed an internal probe into allegations that he had misused WPP money, which he has always rejected.

But S4 flew out of the blocks when it floated in 2018 and Sorrell was hailed as a ‘Comeback King’.

The business went about snapping up digital advertising agencies. But part of the issue is that many of the companies S4 buys are not listed, meaning often accountancy and governance standards are not up to scratch.

Sorrell told the Mail in 2020 that he has ‘limitless ambition’ for S4 and that he wants to create a new model for the ad industry in a digital age.

He dismissed accusations at the time that he was nothing more than a merger and acquisitions banker. His backers say the past six months have been difficult but warned against writing him off.

Analysts pointed out that accountancy firms have been overly cautious lately after being caught out by messes like Carillion and Germany’s Wirecard.

Ajaz Ahmed, founder of digital ad agency AKQA which was bought by WPP in 2012, said: ‘Martin has phenomenal energy, more than most men in their 20s.

‘He has shown that over the past 37 years and has been at the forefront of the advertising industry. Part of the problem is that people simply can’t keep up with him.’

harrry
Previous articleMAGGIE PAGANO: Brewin Dolphin deal is a vote of confidence in the City
Next articleSofa Workshop goes bust after being battered by the pandemic