The smart meter overhaul that could lead to you being charged more for putting the kettle on, watching TV, or charging an electric car at peak times


A smart meter overhaul will mean energy suppliers automatically receive updates on how much power households use every half an hour.

Energy regulator Ofgem is set to gain legal powers in May that will allow energy suppliers to use the data to change prices as often as 48 times a day.

The move is claimed to be able to save households money and help the transition to renewable energy, cut could lead to customers getting bigger bills for watching TV, popping the kettle on, or charging electric cars during peak times.

Following the news of the energy price cap increase to £1,971 last week, the news is sparking concern for households whose bills are already stretched thin. 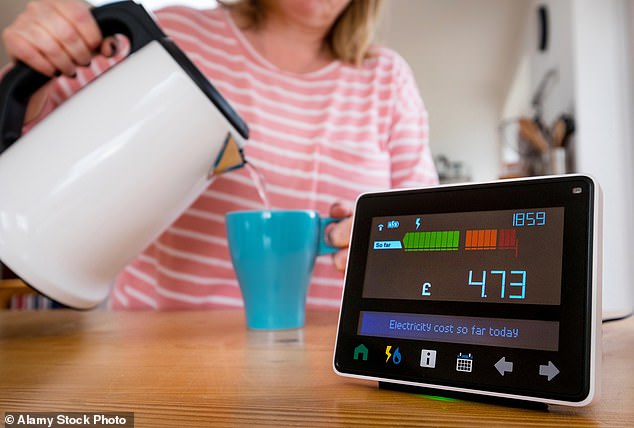 Consumers are concerned that the smart meter overhaul could mean they are charged more for popping their kettle on, or watching TV during peak hours of the day

Ofgem has insisted that the move could save a total of £1.6 billion overall, and spark a revolution in how power consumption is managed.

It will mean that smart meters will automatically default to sending energy suppliers updates on energy consumption every 30 minutes.

Households will also send mandatory daily meter readings to their energy suppliers, as opposed to the current once per month rate.

Despite the push for smart meters to help manage Britain’s electricity grid, energy suppliers are currently in the dark about how much power households are using at an hourly rate, despite calls from suppliers to use less power during busy periods.

The change will be implemented from May 2022, though Ofgem predict that a complete overhaul will take until 2025 to be fully operational.

Industry experts are welcoming the move towards ‘time of use’ tariffs, which would mean charging customers different rates for energy depending on demand.

However, the change has sparked fears that watching prime-time television or charging household gadgets at the wrong time could cost households significantly more.

Some consumer rights groups have also suggested that those with poorly insulated homes or health conditions needing round-the-clock care may suffer without the appropriate safeguards.

Smart meters currently have the opt-in feature of sending updates every 30 minutes to energy providers and the change won’t be implemented until households enter a new energy contract after May.

Ofgem have said that the move has been in the works since 2017, with the intention of using the data to make energy systems run more smoothly.

An Ofgem spokesperson said: ‘This major system upgrade is a significant milestone on Britain’s path to net zero.

‘It will enable a more efficient, flexible and greener energy system which will save billions of pounds per year on all consumers’ energy bills.

‘Ofgem will work closely with industry to make sure it delivers this major upgrade while ensuring those in vulnerable circumstances remain protected.’

However, Citizens Advice remains somewhat sceptical, warning that setting thresholds for energy use and charging more if they’re exceed, could unfairly punish some households.

The consumer watchdog told the Telegraph that this could be an issue for those who would otherwise struggle to change their daily energy habits.

They said: ‘For example, energy inefficient housing with private landlords not taking action, large family sizes, or having old appliances in the home which they cannot afford to replace.

‘Someone’s ability to alter energy usage behaviour should also be taken into account. A dialysis patient needs a higher temperature in their home and should not be asked to compromise on that.’

Are you worried about your energy bills increasing with the smart meter overhaul? Email [email protected]