Fresh questions have arisen over top BT shareholder Patrick Drahi amid claims he has sold Sotheby’s pensioners down the river.

The French tycoon, who has amassed an 18 per cent stake in BT over the past seven months through his firm Altice, also owns Sotheby’s and is looking to list the famous auction house in New York.

As part of the float plans, Drahi has closed Sotheby’s ‘defined benefit’ pension plan, a move that has sent shivers down the spines of the thousands of workers and pensioners from BT. 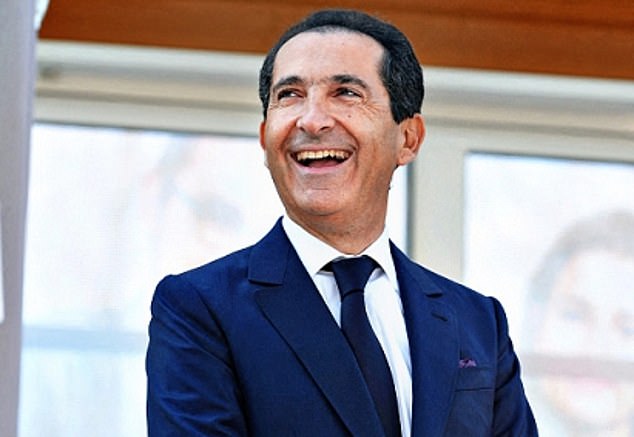 The 1,200 members of the Sotheby’s pension scheme were formally told at the end of last year that the defined plan would be wound up and sold on to two insurance firms.

Members were left aghast by the decision and are considering taking legal action, according to the Antiques Trade Gazette magazine.

In a recent trading update Sotheby’s said: ‘The UK Pension Plan will now go through the required process in order to proceed to a full buyout and ultimate wind-up of the plan in 2022.’ 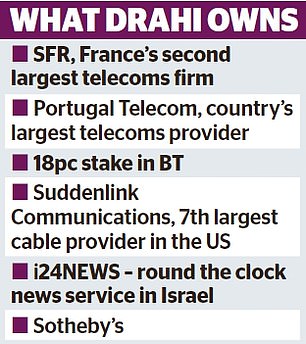 The members believe they were not kept properly informed of the changes to the plan and therefore made financial plans based on incorrect knowledge.

Eileen Goodway, a member of the Association of Sotheby’s Pensioners (TASP), said: ‘The salaries were never big at Sotheby’s but the company promised to look after its workers in old age.

‘The defined pension was delayed remuneration and it helped keep good staff. It is a hammer blow and says a lot about Drahi’s attitude. He’s taken hundreds of millions of pounds out of the business.’

The move comes as 58-year-old Drahi looks to streamline the 277-year-old auction house ahead of a potential float this year on the New York Stock Exchange.

Sotheby’s has hired Goldman Sachs and Morgan Stanley and could achieve a valuation of near £10billion, according to analysts.

The auction house has thrived during the pandemic, achieving £5.4billion in sales last year after successfully moving the business online.

In November alone, Sotheby’s raised £1billion through its so-called Marquee Sales, a series of prestige online and in-person auctions.

A float would result in a healthy profit for Drahi, who bought Sotheby’s for £2.7billion in 2019 and took it private, ending its 31-year run as a publicly traded company.

The float has sent tongues wagging in the City, with many predicting that he could use proceeds from the float to help his ‘creeping takeover’ of telecoms giant BT. 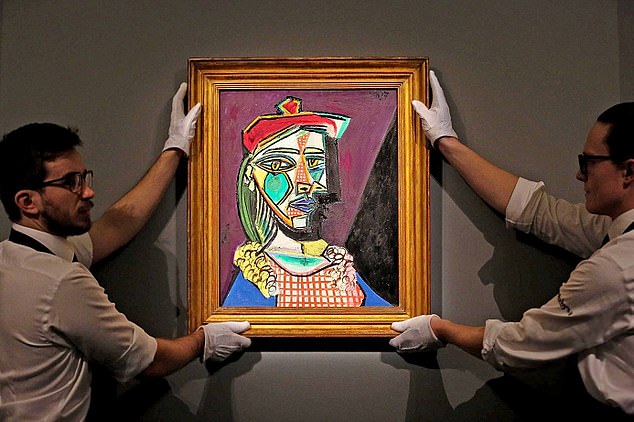 Drahi – known as the king of cost-cutting – is a notoriously private billionaire and prefers to operate under the radar.

In business circles he is renowned as a corporate swashbuckler and deal maker, having spearheaded debt-fuelled acquisitions in the US, Israel, France and Portugal.

He has also garnered a reputation for ruthlessness from French trade unions for cutting workforces and slashing salaries and spending. Last year he mortgaged the historic London home of Sotheby’s.

Drahi has always maintained that he has no intention of making an offer for BT and is ‘fully supportive’ of its strategy.

But many in the City believe he is trying to take control by stealth and without ruffling the company’s management.

He could take control by snapping up the 12 per cent stake held by BT’s second-largest investor Deutsche Telekom. With his current 18 per cent stake, this would take him over the 30 per cent threshold at which a takeover offer must be made.

There are mounting fears that should he gain control of BT, its pension pot could also be vulnerable. BT has one of the biggest defined benefit pension pots in the UK, with some 275,000 members and £57billion of assets.

The scheme closed to new members in 2001.

So worried is the Government about Drahi, that Business Secretary Kwasi Kwarteng is monitoring his movements closely.

Ministers are concerned that were BT to cut costs under him it could affect the ongoing broadband rollout.

Any future bid for BT will likely to be subject to the National Security and Investment Act, which came into force in January, allowing the Government to intervene in any takeovers that raise national security concerns.

Drahi could also face a public relations struggle from retail shareholders, who while only owning 10 per centof the shares number around 782,500 people.