Headache for Rishi Sunak with cost of servicing Britain’s national debt set to soar to more than £1,200 per person over the next year

The cost of servicing Britain’s ballooning national debt will hit more than £1,200 per person over the next year, experts have warned.

As the war in Ukraine pushes inflation ever higher, the Institute for Fiscal Studies (IFS) said yesterday that debt interest payments could surpass £84billion in 2022-23.

That would be £31billion more than the Government’s Budget watchdog predicted last October. 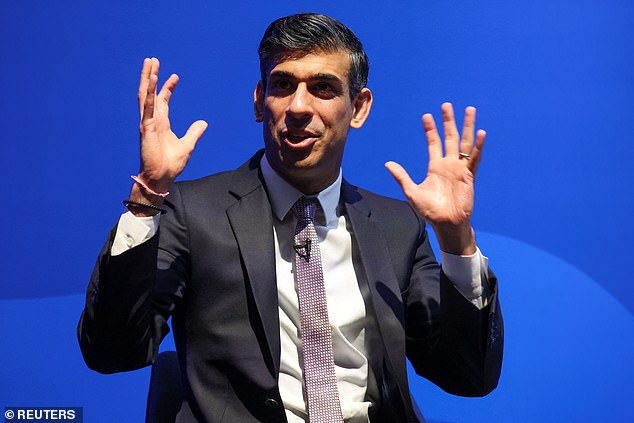 And it would amount to around £1,235 for every person in the UK.

The grim forecasts will cause a headache for Chancellor Rishi Sunak, who is under pressure to announce more support for households and businesses in tomorrow’s Spring Statement.

The Bank of England has warned inflation could surpass 10 per cent towards the end of this year – a level not seen since the early 1980s.

Inflation has a knock-on effect on Government borrowing, as around £500billion of Britain’s towering £2.3 trillion debt pile is pegged to the retail prices index (RPI).

Isabel Stockton, research economist at the IFS, said: ‘We estimate that higher RPI inflation might add £20billion to next year’s debt interest spending, but I should stress that the uncertainty is huge here.’

The Bank of England has raised interest rates three times in three months – taking them from 0.1 per cent to 0.75 per cent – in an attempt to keep a lid on rising prices. This will also bump up the Government’s borrowing costs, as interest rates climb.

A higher Bank rate will add another £11billion onto the Treasury’s bill next year, the IFS predicts.

The sky-high borrowing bill comes as debt servicing costs are expected to hit £69billion in the 2021-22 financial year, according to the IFS, up from £39billion last year.

The Government is now spending more on servicing the national debt than it does on most Whitehall departments, including defence. Only health and education command bigger budgets.

But while debt interest costs in cash terms are ballooning, they are still relatively low in historic terms compared to the size of the economy.

Experts at Capital Economics think Sunak still has around £23billion of headroom against his promise to see debt falling as a share of the economy in three years’ time.

She said: ‘The Chancellor has scope to unveil a big fiscal giveaway.’