State pension and inflation disparity at worst point for a decade


Retirees in Britain face the worst disparity in their state pension payments when set against inflation since the triple lock was introduced over a decade ago, findings warn.

In April, state pension payouts will rise by 3.1 per cent, and be based on Consumer Price Index figure from last September.

But this week, new official figures revealed that inflation was running at 5.5 per cent in the year to January.

Pensioners would currently see a real term loss of 2.4 per cent in the amount of state pension income they receive from the Government, and the problem could worsen with forecasts of inflation peaking at around 7.25 per cent in April, according to experts at Quilter. 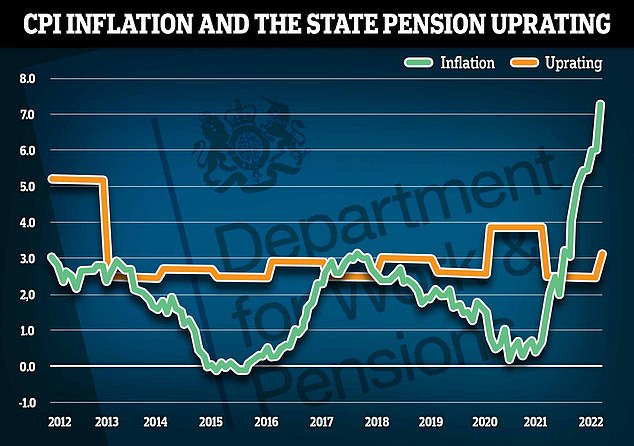 Not keeping up: The disparity between state pension increase and inflation

Since the triple lock was launched in 2010, there have only been 22 months when inflation stood above the uprating of the state pension for the previous April and five of those months were in 2021, says analysis by Quilter.

The previous biggest disparity was 0.6 per cent back in November 2017, when inflation ran higher than the state pension uprating for 11 months, but only on average creating a disparity of 0.4 per cent over the period, the financial firm found.

Jon Greer, head of retirement policy at Quilter said: ‘We are in a fiscally unique time, with a cost-of-living crisis biting and inflation steadily increasing.

‘This is causing financial hardship throughout society and unfortunately pensioners are far from immune from it and will see their state pension payments suffer a real term loss.

‘For those retirees who rely solely on the state pension, this kind of reduction in the real value of their payments will hit them hard especially against a backdrop of rising food and energy prices.

Are you elderly and anxious about energy bills?

Are you claiming pension credit? Find out more about applying here, or call Age UK which will help you apply for help that includes cold weather payments.

Have you contacted your supplier? Age UK says energy providers have a duty to offer support if people are struggling with bills or debt, and you can ask about an affordable repayment plan.

Has your supplier gone bust? Find out what to do here.

Read a This is Money guide to dealing with soaring energy bills here.

‘While this could prove to be a difficult year for many pensioners there should at least be light at the end of the tunnel next year when the next state pension increase is based on the inflation that we are experiencing.’

The triple lock which sets the state pension increase according to the highest of CPI inflation, wage growth or 2.5 per cent was suspended for 2022/2023, but it is hoped this will be reinstated for 2023/2024.

In 2023 the state pension increase could be higher than inflation for that year, points out Quilter.

Greer added: ‘Anyone struggling should see if they can claim some of the other social security payments on offer such as the winter fuel payment, cold weather payment, or the warm homes discount to make the rest of the winter that much easier.’

Former Pensions Minister Ros Altmann led a House of Lords revolt against the Government’s suspension of the earnings element of the state pension triple lock.

However, MPs spurned her efforts and voted for a hike of 3.1 per cent in April.

Baroness Altmann argues that with fuel bills soaring and many depending on meagre pensions, the Government failed to recognise the scale of the crisis many elderly people face.

She has called for an emergency winter manifesto of action to help them, incorporating plans for a national campaign to urge eligible pensioners to claim pension credit.

Age UK estimates that around £2.2billion worth of pension credit and housing benefits goes unclaimed by older people.

Altmann said: ‘Over two million pensioners were in poverty and over a million in extreme fuel poverty before the pandemic.

‘The rise in heating bills and the meagre 3.1 per cent increase in state pensions in April, following the Government’s decision to abandon its triple lock manifesto promise, will leave more pensioners living on inadequate incomes.

‘The Government must recognise that its decision not to increase state pensions in line at least with earnings will cause significant hardship.’

A Government spokesperson told This is Money: ‘We know this has been a challenging time for many people, which is why we’re providing support worth around £12billion this financial year and next to help households across the country with the cost of living.

‘A further £9billion was announced by the Chancellor to protect against the impact of rising global energy prices. Combined with last year’s 2.5 percent increase to pensions, we have ensured pensioners’ incomes have been protected.

‘Our winter fuel payments are supporting over 11 million pensioners with their energy bills and we are continuing to encourage those eligible for Pension Credit, and the wide range of other benefits it can provide, to make a claim.’

Could you claim pension credit?

Are YOU one of nearly 1million eligible pensioners not claiming credits worth thousands of pounds a year?

But you can gain up to £12,000 a year on top via help for housing, heating, council tax, TV licences and other bills.

You can apply yourself by phone, online or by post, or a friend or family member can do this on behalf of an elderly person.

harrry
Previous articleHermes cashes in on demand for £6,000 Birkin bags
Next articleMichael B Jordan and Lori Harvey Head Out for Date Night in YSL Printed Shirt and Celine Leather Jumpsuit