Sterling hit its highest level against the euro for nearly two years as investors bet that interest rates will rise again this week.

The pound rose as high as €1.2038 against the single currency – a level last seen in February 2020 before the pandemic struck.

The rally came amid mounting speculation that the Bank of England will hike rates to 0.5 per cent on Thursday, having raised them from 0.1 per cent to 0.25 per cent in December. 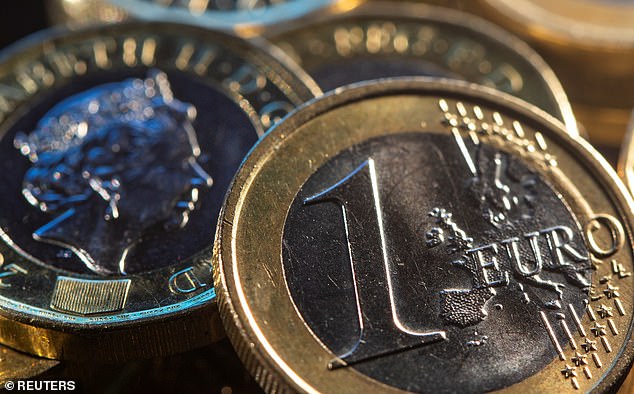 Pound soars: Sterling rose as high as €1.2038 against the single currency – a level last seen in February 2020 before the pandemic struck

Sterling later fell back below €1.20. Higher interest rates tend to lift a currency because of the better returns on offer.

With the European Central Bank seemingly in no mood to start raising rates in the eurozone, the pound has risen more than 3 per cent against the single currency in little over a month.

But sterling remained below $1.35 against the dollar – having traded above $1.40 for spells last year – as the US Federal Reserve prepares to raise interest rates.

The Bank of England slashed rates to a record low of 0.1 per cent after Covid struck in a bid to support the economy.

But it has started raising them again in the battle against inflation.

With energy bills soaring and the price of other essentials such as food and fuel on the rise, inflation hit a 30-year high of 5.4 per cent in December, well above the Bank’s 2 per cent target.

It looks set to reach 7 per cent this spring.

Investors are now betting on five interest rate rises this year – taking them up to 1.5 per cent by Christmas, the highest level since early 2009.