When M&S boss Steve Rowe walks the shop floors, talking a mile a minute and constantly stopping to greet his staff, he seems to personify the spirit of the much-loved chain.

Usually dressed in a suit bought from ‘The Arch’ – the flagship store in Marble Arch in Central London – he brims with enthusiasm about everything from cashmere hoodies to spa-worthy scented candles.

Rowe, 54, has spent almost 40 years at M&S, having joined the company from school at the age of 15 and risen through the ranks to become chief executive. 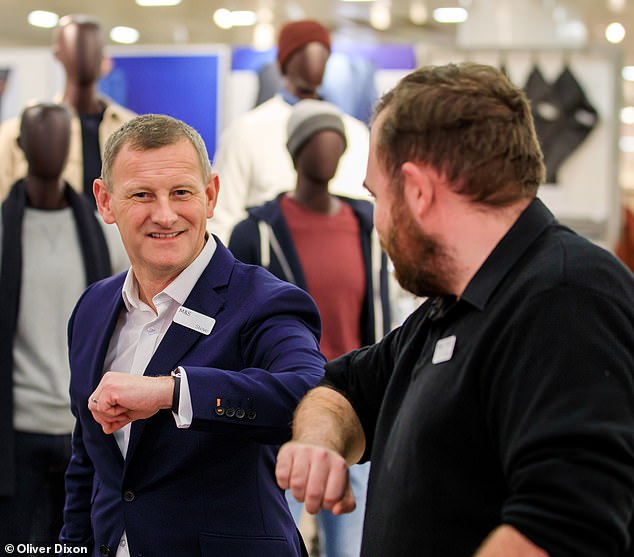 Team player: Steve Rowe (left) joined M&S from school at the age of 15 and worked his way up to chief executive

So why is he leaving now, just as the business, which has been through one of the most troubled periods in its 138-year history, seems to have turned a corner?

‘There is a danger with chief executives that hang around too long,’ he says.

The business, he argues, is at an ‘inflexion point’ where he has set it firmly on course for the recovery that has been elusive for so long.

Now he is ready to hand over to others for the next phase of the transformation. ‘The things that need to be done now, these are five-year jobs, so it’s right to hand over.’

When he took the reins six years ago, the much-loved retailer was in the claws of one of its worst crises.

A string of chairmen and chief executives had failed to stop the rot as the company lost ground to online rivals and to new high street competitors such as Zara. By the time Rowe and chairman Archie Norman took over, it was a case of do or die.

When Rowe put together a presentation on turning the company around, his first slide was entitled ‘Putting out fires’ and Norman described it as a ‘burning platform’.

M&S, like any other business, has no God-given right to exist

Now, Rowe frankly admits that, although the company never actually came to the brink of bankruptcy like Debenhams, it could have gone hurtling down the road to ruin if they had not implemented their drastic recovery plan.

‘A business as challenged as M&S was, with declining profits and sales, well you could see how there was a route that if we didn’t change, we could easily go that way. It was a very real issue.

‘M&S, like any other business, has no God-given right to exist.

‘It has been hard yards, a really big programme of change. We have lifted up every stone in this business, had a good look underneath and we have not put them down again until we have fixed it.’

How close did M&S get to the brink? ‘Look, I don’t think we were ever in quite the precarious state of the others, we had a good balance sheet. We weren’t on a knife edge to be going bankrupt, it would be wrong to say that. But if we didn’t change over a period of time …well, it would not have been an attractive business.

‘You have to look back and you can probably argue that M&S profits were going backwards at a rate of circa £100 million a year. We had a store estate where the costs were only going one way, our returns per square foot were going backwards, we were losing market share every single year in clothing.’

Have all the fires been put out? ‘We have been making the right business decisions and you can say those fires have gone.

‘I don’t want to put words in Archie’s mouth but I think he would say the same thing. Have we optimised it, no – but we are not on a burning platform right now.’

Unlike many of his predecessors, Rowe can claim to be going out on a high note. His exit, he says, has been planned for some time. ‘We didn’t want any of the succession issues we had in the past.’

He is alluding to Marks’ history of being plagued with messy and abrupt transfers of power at the top, including the exit of his predecessor Marc Bolland in 2016 after disappointing clothing sales. Back in 2004, the chairman and chief executive were ousted dramatically in the middle of a hostile bid from Sir Philip Green.

But some in the City were left scratching their heads about the fact Rowe is handing over to not one but two new leaders, chief executive Stuart Machin and co-chief executive Katie Bickerstaffe. It sounds like a kind of ‘buy one boss, get one free’ deal.

Perhaps it’s flattering that it takes two people to replace him, but who is actually in charge? ‘Stuart is the CEO. Ultimately he has the last word,’ he says.

But why give them both the CEO title if they are not completely equal? ‘That is a matter for the board, not for me. But we have to be absolutely clear where the stewardship lies. The team does report to Stuart,’ he says.

At other firms, joint chief executives have been a recipe for squabbles and fallings-out. Rowe, however, says that Machin, Bickerstaffe and strategy and finance chief Eoin Tonge are ‘a great team’. ‘The four of us have worked together very well and now it will be the three of them.’

As for the business having its first female chief executive – albeit one who still serves under a male boss – he says: ‘It shouldn’t be about male or female, but I have to tell you Katie has been a real asset. She brings an added edge to the business.’

He swerves a question on whether the two chief executives will have equal pay. ‘The details will all be published as part of the normal package that goes in the remuneration report,’ he parries.

Regardless of whether or not it looks sexist to install the first female chief executive only to have her reporting to a male superior, Bickerstaffe and Machin will have their work cut out. 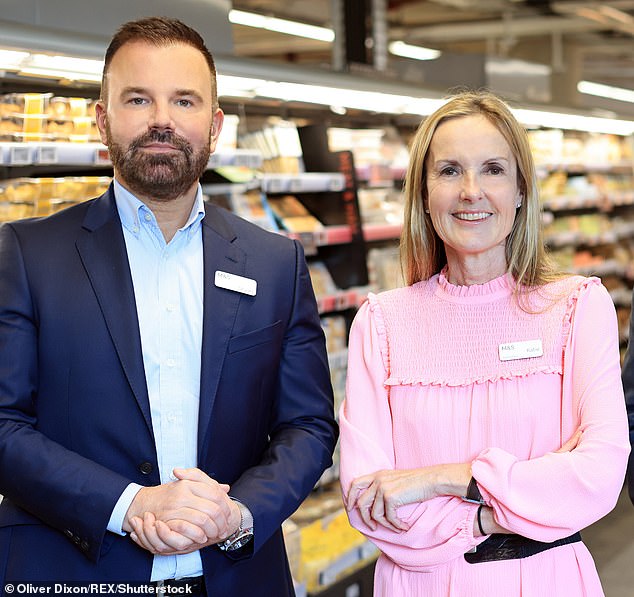 ‘When we go down the jobs list I would say to you we have made a good fist of fixing things and working out what to do. But is everything fixed to the point that it is market leading, no it is not. I would be the first to admit that. We have only done about five out of ten on the transformation journey.’

He is acutely aware that M&S has had many false dawns in the past. ‘We have got to maintain momentum in clothing and home, and in food. We have to show people this is a sustainable recovery, which is something we haven’t done in the past. Without meaning to be arrogant, we have done everything we said we were going to do in my leadership on time and on budget.’

Under Rowe’s command, Marks has shut underperforming stores and opened new ones, as well as sprucing up drab shops.

Its shares fell so far it lost its place in the blue-chip FTSE100 index in 2019. Since then they have risen strongly, hitting £2.50 earlier this year, but despite Rowe’s best efforts fell back to £1.60 on Friday.

The biggest transformation he says, is the £750million deal to sell M&S groceries through the online retailer Ocado. ‘One day we might say this was as significant as moving from Penny Bazaars into high streets. Time will judge that one, but it is a massive move. We have built a digital and data engine, with 14million Sparks cards and four million users of our app.’

Leaving will undoubtedly be an emotional wrench for Rowe, who is married with two daughters. He is a workaholic who loves nothing more than wandering the aisles of his local store in Bromley, Kent.

He has ‘no thoughts’ on his next move as he has been so busy focusing on M&S. ‘But I’m not hanging my boots up, I have not retired, if that’s what you’re asking.’ Will he come to the annual shareholder meeting and ask awkward questions, as small investors are apt to do? ‘Definitely not,’ he laughs.

He lacks the airs and graces of many chief executives, declining to move into his predecessor’s grand office at the Paddington HQ, even getting rid of an express lift to the executive floor. Unlike most corporate bigwigs who haunt posh restaurants like The Wolseley, he holds court in M&S store cafes, among the mums and babies and the clattering cutlery. For lunch, he favours a prawn sandwich from one of his food halls.

His dad Joe was a senior manager so M&S is in his DNA. ‘I have worked hard and I have enjoyed every single second of my work,’ he says. ‘I am one of the luckiest people alive. Having a job I have been able to work and enjoy every day of my life is a rare privilege.’

‘Will I miss it? Yeah, of course, but I am pretty sure I will visit the occasional shop. But M&S is one big family, you never leave. It is the biggest alumni group in the UK and I am looking forward to joining.’