The heightened threat of a Russian invasion of Ukraine sparked selling across global stock markets on Monday and pushed oil prices to seven-year highs.

US officials have warned that a Russian invasion of Ukraine could happen as early as this week, with President Joe Biden assuring Ukrainian President Volodymyr Zelensky on Sunday that the superpower would respond ‘swiftly and decisively’ if the conflict does escalate.

The FTSE 100 and FTSE 250 were each down by around 2 per cent in afternoon trading, while European peers traded more than 3 per cent lower and Asian markets all closed in the red.

Oil has continued its climb with a barrel of Brent Crude trading at a notch under $95. 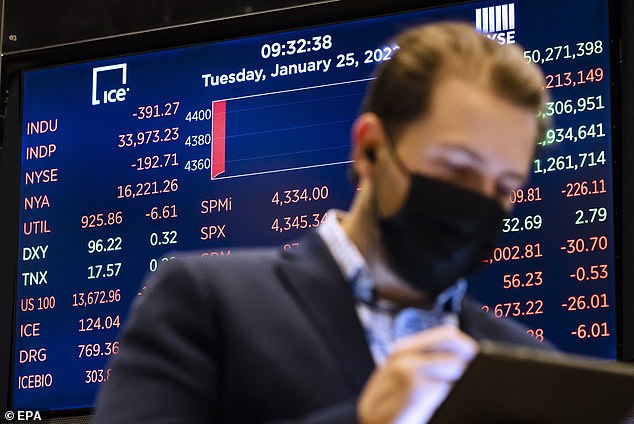 US stocks are being closely watched bu the S&P 500 was down just 0.13 per cent in early trading today.

Brent Crude Oil Futures continued to move higher on renewed geopolitical tension, rising 0.26 per cent to $94.69 a barrel, which has helped limit losses in heavyweight energy stocks. However, energy giants BP and Shell’s shares were still trading 1.8 per cent and 1.3 per cent lower respectively by late morning.

Financials and travel stocks have fared worst in the market rout, with British Airways owner IAG and asset manager Abrdn down 5.6 per cent and 4.6 per cent respectively.

Within the FTSE 250, Wizz Air and cruise operator Carnival are the biggest losers, falling 7.7 per cent and 5.7 per cent respectively.

Budget airline Wizz Air operates the second highest number of flights between Europe and Ukraine, behind Ryanair, according to aviation analytics firm Cirium.

Wizz Air said it had not made any changes to its schedule of flights to and from Ukraine, but advised passengers to regularly check for updates as it monitors the situation closely.

‘Wizz Air continues to closely monitor the situation in Ukraine,” the Hungary-based carrier said in a statement.

‘Currently, we have not made any changes to our schedule and all of our flights to/from Ukraine continue to operate as normal. All passengers with booked flights to and from Ukraine are advised to regularly check their mailboxes for further information about booked flights.’

Commenting on Monday’s sell-off, head of markets at interactive investor Richard Hunter said: ‘Investors have been wrong-footed once more as simmering geopolitical tensions and the reverberations of a high US inflation print weigh on sentiment.

‘In economic terms, while [a Russian invasion of Ukraine] would be most acutely felt in Europe, there would likely be wider implications such as the possibility of supply chain restrictions and a further boost to the oil price on lessened supply.

‘The oil price has now risen by 23 per cent in the year to date, exacerbating inflationary pressures.

‘In the UK market, the premier index has been swimming against an increasingly rough tide. While certainly not immune from the wider global concerns, the index has provided some insurance against inflation given the nature of its constituents.

‘It is also seeing the benefit of having a larger exposure to the likes of the oil and banking sectors, both of which have been moving more positively given the current interest rate and supply situations.

‘Even so, the dampened sentiment which flooded Wall Street at the end of last week spilled over into Asia and has landed on UK shores in early trade.’