Investment fund Stonehage Fleming Global Best Ideas is very clear about how it makes money for clients. It identifies strong growth businesses – preferably with a global reach – and then holds them in the expectation of rising earnings being reflected in higher share prices.

It’s an investment approach that has been employed since the fund was formed eight and a half years ago – and as far as investors are concerned it’s proved a winning formula. Since launch, the £1.9billion fund has delivered an overall return of 212 per cent – 96 per cent over the past five years.

The fund is run out of London by Gerrit Smit. It holds shares in 27 companies, most of which are listed in the United States. There are few surprises in the portfolio – the biggest holdings are all growth businesses, primarily benefiting from the digital revolution: the likes of Alphabet, Microsoft and Accenture. Although Smit accepts concerns that shares in many technology companies are overpriced, he believes his approach means the fund steers clear of those businesses where share prices have got ahead of themselves. 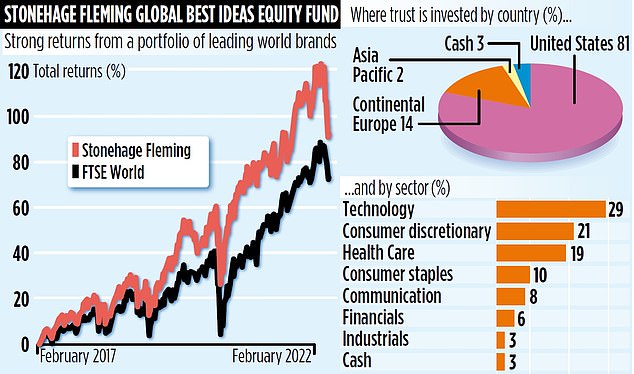 ‘We are only interested in investing in sustainable, staple technology businesses that are now playing key roles in how we live our lives,’ says Smit. ‘They’re profitable companies that have been around a while, are hugely cash generative and they will remain profitable in the future.’

He compares such robust businesses – the likes of Alphabet and Microsoft – with what he describes as ‘moonshot’ technology companies. These, he says, are currently not profitable with their share prices reflecting more the expectation (or hope) of profits. These companies – such as Uber and Deliveroo – are the ones he will not touch.

‘When we buy a company for the fund,’ says Smit, ‘our intention is to hold the shares indefinitely.’ A number of the company’s big positions – in consultancy group Accenture and Google (now Alphabet) – have been held since the fund’s launch in August 2013.

Smit says he looks for four key things when buying a company. It must be a growing business – with the growth being organic and not through acquisition. It must also have quality management, be profitable now rather than merely a promisor of future profits, and have strong cash flow. Provided the company’s shares are not too expensive, it then becomes a potential buy. 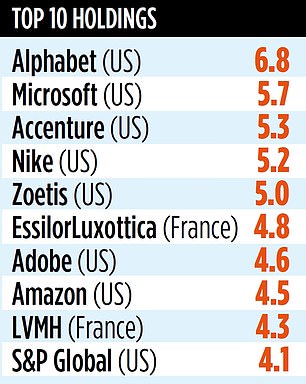 Occasionally, external factors upset the applecart. It happened last year when the Chinese State announced curbs on private tutoring while denouncing online video games as ‘spiritual opium’. It triggered a slide in the shares of Chinese tech company Tencent. Smit’s response was to offload the fund’s holding in Tencent. ‘The risk premium was too high,’ he says. The proceeds were invested in Dutch company ASML, a provider of equipment to the semiconductor industry.

‘Digitalisation is a big theme across our portfolio,’ he adds. ‘A large beneficiary of such an industrial revolution is the semiconductor sector.’ Another key fund holding is USlisted Cadence Design Systems which provides computer software to microchip makers.

Smit says the companies he holds are forecast to grow earnings by 18 per cent per annum over the next three years. Although he doesn’t think the holdings are likely to deliver equivalent investment returns for investors over the same period, he is adamant a portfolio of some of the world’s most successful growth companies will deliver outstanding long-term results. The fund’s total annual charges are 0.84 per cent and the stock market ID code is BCLYMF3.