Emergency scam prevention hotline receives more than 75k calls within six months of launch: Will 159 become as recognised as 999?

A fraud prevention hotline designed to protect people from being manipulated and scammed is receiving thousands of call every month, new data shows.

The phone number enables current account customers to connect with their bank safely and securely when they receive an unexpected, suspicious or fraudulent call. 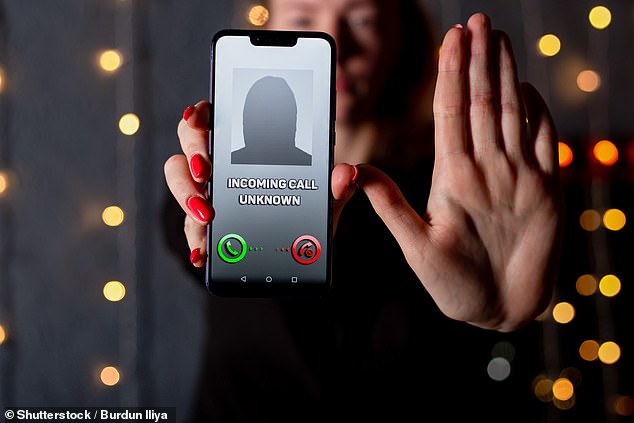 Stop, hang up and then call 159: The easily memorable short-code number provides people with a route back to safety when they are at most risk of being manipulated and scammed.

The service now includes businesses from across the banking, technology and telecoms sectors, including HSBC, Santander, Lloyds, Meta, Microsoft and Google, BT, TalkTalk and Three.

The aim is to help these businesses work together to prevent fraud.

It has also recently expanded further to include Nationwide Building Society, TSB and the Co-operative bank.

It is hoped that the 159 short code number, which was launched by Stop Scams UK, will soon become a reflex action for all Britons suspecting they might be on the receiving end of a scam.

The message behind the service is simple: if you receive an unexpected or suspicious call about a financial matter from someone who claims to be from your bank, the police or any other authority figure: Stop, hang up and then call 159.

With scams growing at an alarming rate at the moment, the service is certainly timely.

In the first six months of 2021 alone, authorised push payment fraud – where victims are manipulated by criminals into making real-time payments – was 60 per cent above the equivalent level for 2020, according to UK Finance.

The losses incurred by individuals and businesses was found to be 71 per cent higher.

To put this in cash terms, scammers stole over £355m in the first 6 months of 2021 from individuals and small businesses by pretending to be either a bank or other service provider, and encouraging them to make a payment or transfer money.

It may also prove to be a more reliable alternative to Action Fraud, the crime reporting service.

Latest figures show that almost half of those who phone the national fraud agency abandoned their call in February.

Of 40,782 calls made to Action Fraud, a whopping 21,777 were abandoned. This includes calls that were not connected to an advisor and those that were simply terminated by the caller.

Although 159 is still a pilot, in the coming months Stop Scams UK will invest further in 159, including a new Intelligent Voice Response system to route calls, and help better understand scam journeys.

If the pilot is successful, Stop Scams UK will ask Ofcom to make 159 a universal number offered by all telephone providers, similar to 101, 111 or 999.

Ruth Evans, chair of Stop Scams UK, said: ‘I am delighted to see 159 reach this important milestone. This is a watershed moment for the project.

‘Not only is 159 being used by growing numbers of people but it now serves an even larger number of banks.

‘I am pleased that every call to 159, is a call that is not being had with a scammer. No bank will mind if you hang up the phone and use 159 instead. It is a vital means of helping keep UK consumers safe.

‘In the coming months we look forward to making further announcements on our collaborative projects, including on URL blocking and data sharing.’

The push for banks and other major firms to help stop the tide of scams was also in the spotlight last week, as it was revealed more than £200million of fraud has been spotted and prevented since 2016 due to a rapid scam response scheme enabling bank staff to alert local police forces with a codeword.

Staff at banks, building societies and Post Offices are trained to spot the warning signs that suggest someone may be falling victim to a scam before alerting their local police force to intervene and investigate.

Last year, £60.7million was stopped through the scheme, according to figures from UK Finance, thanks to 10,072 phone calls made to the police by branch staff.