War in Ukraine has piled pressure on ministers to stop the hollowing out of the UK’s cutting-edge defence and aerospace industry.

As the Russian assault continued, experts said the crisis underscores the need for a strong domestic sector and has exposed decades of ‘lax’ policies.

For years successive governments have allowed major companies to be sold to foreign buyers with little scrutiny. 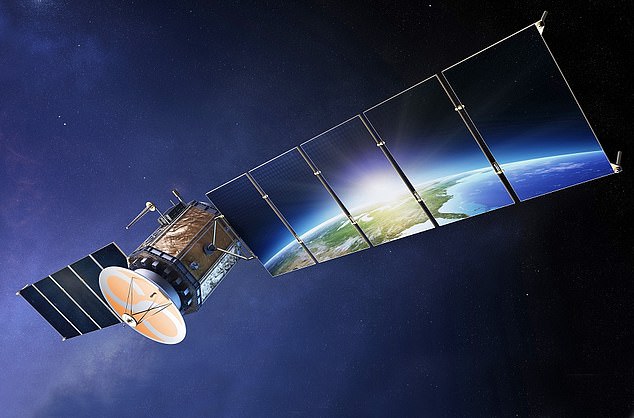 American firm, Viasat, has targeted the satellite and telecommunications giant Inmarsat (pictured), in a £5.4bn deal

Several blockbuster takeovers of strategically important and sensitive firms – all by overseas buyers – are still in the works.

Ultra Electronics, which makes high-tech kit that can detect enemy submarines, has been swooped on by private equity vulture Advent International, in a £2.6billion bid.

Fellow FTSE 250 defence contractor Meggitt is being sold to US group Parker-Hannifin for £6.3billion.

And another American firm, Viasat, has targeted the satellite and telecommunications giant Inmarsat, in a £5.4billion deal. Inmarsat is the largest provider of in-flight wifi for airlines, the top provider of internet connections for ships and has 14 satellites in orbit.

Critics argue that the defence industry has been hollowed out by years of underfunding, a laissez-faire approach to takeovers and a keenness to buy equipment from overseas suppliers rather than build up UK businesses.

New laws have been brought in to beef up the Government’s scrutiny and ability to block deals in 17 important industries after a string of sell-offs.

The proposed takeovers of Meggitt and Ultra are being analysed by ministers.

And the Business Secretary, Kwasi Kwarteng, is in discussions with Viasat about what commitments it could make to seal the deal.

But experts remain worried the relentless raid is putting British jobs, intellectual property and cutting-edge technology at risk of disappearing to other countries.

Admiral Lord West, the former head of the Royal Navy, said: ‘It is absolutely crucial that we have our own sovereign capability in all areas of defence.

‘We can’t just go and rely on somebody else.

‘I think the Government has to be much more pro-active about takeovers and make sure that companies don’t get sold to the wrong buyers and broken up.

Lord Heseltine, who served as a defence secretary under Margaret Thatcher’s government, said: ‘I’m extremely concerned about the lax way in which we allow British companies to be taken over.’

But he added: ‘I don’t think this is an issue that is only specific to the Ukraine crisis – this is about Britain’s lack of industrial strategy for decades.’

The sale of Cobham to Ultra’s suitor Advent in 2019 for £4billion threw the issue of UK defence takeovers into sharp focus.

Advent promised to be a long-term investor in the firm, which was set up in 1934 by Sir Alan Cobham and pioneered air-to-air refuelling technology.

But within 18 months Advent had chopped Cobham up and sold off more than half of the business.

Independent analyst Francis Tusa echoed Heseltine, describing a lack of focus and commitment to the UK’s defence sector as ‘endemic’.

Tusa said: ‘There have to be much tighter rules for selling defence companies. At this point we’ve hardly got any left.

‘Ukraine will put even more of a spotlight on this as a wider issue but unfortunately it is endemic. All of the forces are guilty of this.

Defence analyst Howard Wheeldon added: ‘What Ukraine demonstrates is that governments of all colours have failed to prioritise defence, that’s the real issue.

‘Now we need a complete overhaul and rethink of how we approach our industry.’