The true cost of Rishi’s big freeze: As inflation soars, how the Chancellor’s tax thresholds will sneakily punish workers 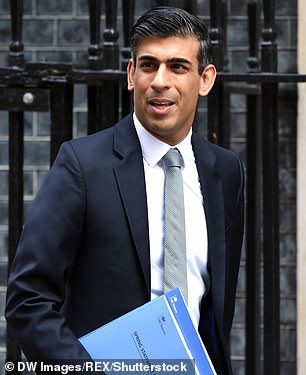 Toxic mix: Chancellor Rishi Sunak’s Treasury is set to benefit at the expense of taxpayers

The true cost of the Chancellor’s stealth tax raid and soaring inflation is today laid bare. Last year, Rishi Sunak announced that a series of tax-free allowances and thresholds would be frozen for five years.

The sneaky tax grab, by which the Treasury pockets more as wages rise with inflation, is known by economists as ‘fiscal drag’.  Yet the effect of the freeze is now far harsher than first feared, as inflation has skyrocketed and is forecast to soar well above 8 per cent this year.

It comes as the Chancellor raised the National Insurance tax threshold last week and also committed to cut income tax by 1p in the £1 in 2024. But today, Money Mail reveals how the new toxic mix of inflation and frozen tax allowances will cost Britons.

The analysis, carried out by investment broker Hargreaves Lansdown using Office for Budget Responsibility (OBR) figures, reveals that taxpayers will be paying thousands more at the end of the freeze in 2026 — even despite the income tax cut.

The spending watchdog has already said income tax will raise an extra £17.5 billion a year after the freeze. Inheritance tax is also expected to bag £8.3 billion a year by 2026 — up 36 per cent on this year’s forecast of £6.1 billion.

Capital gains tax and the pension lifetime allowances have also been frozen until 2026.

And our figures illustrate how much extra tax individuals will be forced to pay because the thresholds and allowances will not be rising in line. 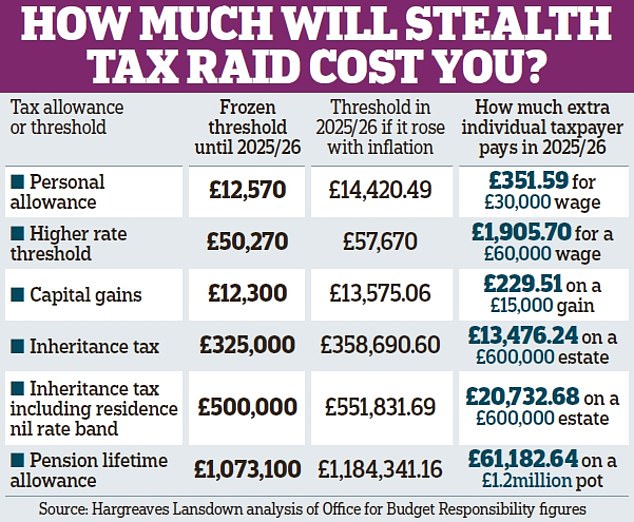 Surging inflation has already caused the OBR to revise its estimates for tax-takes made back in October.

Income tax will now net an extra £4 billion a year by 2026, inheritance tax will bring in £400 million more, and capital gains will hand the Treasury an extra £1.5 billion.

Tom McPhail, director of public affairs at consultancy The Lang Cat, says: ‘Rishi Sunak is proving to be the fiscal drag king, taking billions from us thanks to the insidious combination of frozen allowances and rising inflation, while trying to dress himself up as a tax-cutting Chancellor.

‘His focus is obviously on the General Election expected in 2024, but given the very real and immediate squeeze on people’s living standards, it could prove to be a case of the emperor’s new clothes.’

Sarah Coles, personal finance analyst at Hargreaves Lansdown, says: ‘Freezing the tax thresholds was always a nasty stealth tax — but with inflation rising through the roof now, it’s a stealth tax on steroids.

‘At a time when so many people are struggling, it feels particularly unfair that the Government is ramping up our tax bills too.’