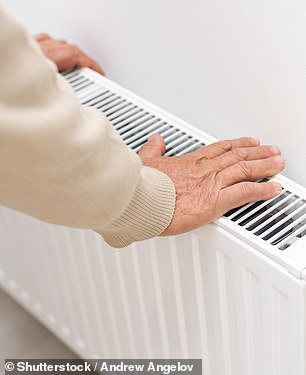 ‘My energy bill has already jumped by one third overnight and I am on a low fixed income,’ an elderly person told Age UK

The vast majority of elderly people are anxious about how to pay rising bills for food and heating their homes, according to Age UK.

Three-quarters of over-65s surveyed by the charity – the equivalent of 9.4million people in the UK – say they are worried and over half plan to heat their home less this winter.

Experts and industry data forecast that energy bills could spike by up to 50 per cent and hit an average £2,000 a year after the price cap is reassessed in April.

The headline inflation rate rose by 5.4 per cent in December, up from 5.1 per cent in November, and experts forecast it will hit 6 per cent in the spring.

The state pension is due to rise 3.1 per cent in April, after a row over the Government’s scrapping of the ‘triple lock’ guarantee on annual rises.

Earlier this month, Age UK urged the Government to give the elderly on the lowest incomes £500 payments and cut 5 per cent VAT on energy bills from April until at least the end of the year.

Former Pensions Minister and campaigner Ros Altmann has also called for an emergency winter manifesto to save the lives of older people.

And a petition calling for an emergency £500 increase in the basic state pension has been launched by Dennis Reed, director of over-60s campaign group Silver Voices.

Are you elderly and anxious about energy bills?

Age UK is urging older people to call its free national advice line on 0800 169 65 65 before turning the heating off or down.

Its staff will check you are receiving everything you are entitled to, including pension credit and attendance allowance.

Find out more about pension credit here, or call Age UK which will help you apply for help that includes cold weather payments.

Age UK adds that energy providers have a duty to offer support if people are struggling with bills or debt, and you can ask about an affordable repayment plan.

What if your supplier has gone bust? Find out what to do here.

Scroll down for energy saving tips to help cut costs.

This has so far received more than 12,000 signatures, enough to require a written response from the Government.

A government spokesperson says: ‘We know this has been a challenging time for many people, which is why we’re providing support worth around £12billion this financial year and next to help households across the country with the cost of living.

‘Our winter fuel payments are supporting over 11million pensioners with their energy bills and we are continuing to encourage those eligible for pension credit, and the wide range of other benefits it can provide, to make a claim.’

Read more from the Government about what it is doing to help below.

Age UK is running a ‘Cost of Cold’ campaign urging older people to get in contact on 0800 1696565 for advice on what help is available before turning their heating down or off if they are struggling with their bills.

The group says it has been inundated with stories from thousands of older people who are already cutting back on heating, food and other essentials:

Charity director Caroline Abrahams says: ‘The rapid rise in the cost of living is causing a huge amount of anxiety among older people, plunging increasing numbers into dire financial straits.

‘With the energy crisis deepening and nothing but price hikes on the horizon, the time has surely come for the Government to stop dragging its feet.

‘It’s high time Ministers took action and provided a much-needed safety net for the millions of older people who are fighting to stay afloat.

‘Many older people are reliant on the state pension as their main source of income and simply do not have the flex in their finances to cope with such enormous price rises.

‘At Age UK, we are being contacted every day by desperate older people in this position, people for whom there are only ‘bad choices’ – ration your energy use, cut back on food or other essentials, or go into debt.’

The charity surveyed 1,280 people, weighted to be nationally representative of the 65-plus age group, in mid-January about their bills.

It says that more than 95,000 people have so far signed a letter to the Prime Minister urging him to protect older people from the energy crisis. The charity plans to hand deliver the letter at 10 Downing Street this Monday.

What about workers still saving for old age?

Separate industry research has probed the impact of the rising cost of living on those still saving for retirement.

Some 47 per cent of people who are not yet retired say they can’t afford to save right now, according to a nationally representative survey of nearly 2,100 adults by the Pensions and Lifetime Savings Association.

However, 32 per cent say they can afford to contribute more to their pensions, it found.

The PLSA has urged the Government to significantly increase minimum auto enrolment pension contributions from the current 8 per cent of earnings between £6,240 and £50,270 – split between personal, employer and tax relief contributions – by the late 2020s.

The industry group wants the total raised to 12 per cent of all salary, but with employers paying most of the increase – an extra 3 per cent, while staff would put in 1 per cent more.

Who pays what: Payments into pensions are split between personal, employer and tax relief contributions

The PLSA says if an employee cannot afford their extra 1 per cent, they should have the option of staying at the current contribution level of 5 per cent.

In its survey, 41 per cent backed this idea while 16 per cent disagreed.

Bosses must currently provide a workplace pension for staff aged 22 and earning more than £10,000 a year, but Tory MP Richard Holden has put forward a private member’s bill to change the rules.

Working 18-year-olds and low earners – some of whom work several jobs, all with wages under the threshold – would automatically begin paying into a pension.

The Department for Work and Pensions aims to abolish the lower earnings limit and reduce the age for automatic enrolment, but not until the mid-2020s.

Age UK has compiled feedback from elderly callers to its helpline about their experiences trying to meet essential bills.

Marion, aged 69, says: ‘My energy bill has already jumped by one third overnight and I am on a low fixed income.

‘I am currently in bed keeping warm today as it’s so cold and I can’t afford to have my heating on for the whole day.

‘I’m reduced to showering on alternate days which I hate and I’m eating food that’s microwaveable to avoid heating my oven. I don’t drink or smoke or have holidays or go out socially.

My energy bill has already jumped by one third overnight and I am on a low fixed income. I am currently in bed keeping warm today as it’s so cold

‘I feel as though my life is just paying bills every month, there’s nothing to look forward to. I watch TV and read and walk my little dog when I feel well enough.

‘I cry a lot these days. I can’t imagine how I’ll pay the bills when the energy price goes up again, I lose sleep over it and I can’t find a solution.’

Ron, who is aged over 75, says: ‘Surviving on the state pension with guaranteed pension credit just about keeps your head above water.

‘With the expected rise in utility bills I, like many more, will be slowly sinking.’

Tony, also aged over 75, says: ‘I have always carefully budgeted to cover my utility bills and have been grateful for the various payments from the Government.

‘In particular the warm home discount makes a big difference. I did fix my gas and electricity rates last year but this ends at the beginning of February.

‘So, with the anticipated increases to come this year I can see my bills possibly doubling and putting unsustainable strain on my resources.

‘I only receive a basic state pension and pension credits and have fully explored all available Government schemes.

‘Unfortunately these fall short of covering these unprecedented increases. The possibility of a one-off payment or an increase to the warm home scheme would really help.’ 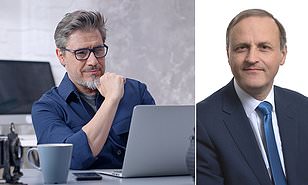 An older person who wishes to remain anonymous says: ‘I have a very small pension and live on savings and I rent privately.

‘My cost of living will be unaffordable before long. Terrified to have the heating on too long to keep my home warm.

‘Everything is spiralling out of control in price leaving us pensioners to struggle to live. The £200 heating allowance I receive will not help much towards the high costs of energy now.’

What is the Government doing to help?

The £12billion of support it is providing includes:

– Increasing the National Living Wage and saving 15 million households £100 a year on average through the Energy Price Cap.

– Reducing the universal credit taper and increasing in work allowances

The universal credit taper rate has been reduced from 63p to 55p, which the Government says combined with the work allowances increase represents an effective tax cut of £2.2bn.

It says in practice this means that for every £1 that a claimant earns, their universal credit payment will be reduced by 55p, making them 45p better off than if they had not worked.

The Government notes that it is trying to strike the right balance between introducing measures that support people and not exacerbating inflationary pressures.

Grace Gausden, of This is Money, compiled 20 tips here and below are the top five.

1. Turn devices around the home off standby, or onto idle mode. Doing so could save you £40 a year on your bills.

2. Draught proof gaps around windows, doors and floorboards by fitting foam strips, plastic seals or brushes. Seal gaps between floors and skirting boards with a simple sealant bought from any DIY store. This could save you £30 a year.

3. Turning the lights off when leaving a room everytime could help you save £14 a year.

4. Use your washing machine on a 30-degree cycle instead of higher temperatures, an action that could save you £10 a year.

5. Only boil the water you need in your kettle, saving £8 a year.