Thrill seekers should aim for Alternative Investment Market: You can win big (or lose it all) by buying smaller firms

By Anne Ashworth For The Daily Mail

Yet despite the attractions of these businesses, the FTSE Aim All-Share index has tumbled by 18 per cent since the start of the year, in a descent that began before Russia invaded Ukraine. The FTSE100 is down by just 5 per cent, although the war has sent tremors through global stock markets. 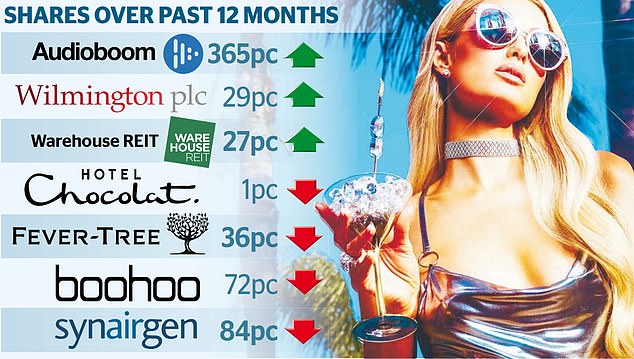 Investors in Aim enjoy generous tax breaks. But, despite this sweetener, some will see the fall in the index as a warning sign that a slowdown could have a disproportionately large effect on Aim companies’ prospects.

Concern is mounting that surging coal, gas and oil prices could mire the economy in stagflation, which is a combination of inflation and recession.

Russ Mould of investment platform AJ Bell says: ‘This ugly mix is the fear stalking the markets right now and the longer the war rages, the more likely this scenario becomes.’

However, the current burst of interest in Aim funds suggests that investors, eager to back burgeoning businesses through economic vicissitudes, remain willing to explore the market’s potential.

Aim, which used to be viewed as an unruly adolescent, is now considered to have reached a degree of maturity, while retaining the capacity to shock. Shane Gallwey of Guinness Ventures compares Aim to Marmite.

‘Some people will not touch it. Others recognise that it is a growth market which means there will be blow ups – and great successes like Audioboom,’ he says.

Shares in Audioboom, the podcasting group, have soared by 365 per cent over the past year, spurred by rumours of a bid from Amazon or Spotify – which would be gratifying for its largest shareholder, the property developer Nick Candy.

The rise of Audioboom is a reminder of the requirement for strong nerves. To make the most of what Daniel Gallagher of Killik & Co calls ‘Aim’s opportunities – and challenges’, you need to take a five or 10-year view.

You must also do your homework. Darius McDermott of Fund Calibre says: ‘Aim may have many well-run businesses. At its launch in 1995, you could list a dodgy stock with little more than a bad PowerPoint presentation. But it’s still a stock picker’s market.’ Aim specialists worry that some investors rely too much on tipster websites, although baseless rumours are a constant feature.

Last month, fashion retailer Asos moved to the main market to ‘enhance its corporate profile and recognition’ – in other words to boost its share price.

Others were said to be about to follow, although Aim is no longer regarded as a stepping stone – good news for those who hold these firms for the tax breaks.

These concessions are a huge lure, although they have caused so much money to flow into the market that even the threat of their removal would hit share prices.

Most Aim stocks are exempt from inheritance tax if held for more than two years. There is no definitive list of qualifying companies but finance and property are excluded. Income tax and capital gains reliefs are also available if you hold shares through an EIS (enterprise investment scheme) or VCT (venture capital trust).

Some fund managers, including Downing, Invesco and Octopus, offer IHT portfolios in an Isa wrapper. A smaller companies or Aim fund may be the answer if you feel unequal to the task of stock picking. Jonathan Winton, manager of Fidelity UK Smaller Companies fund sees this as his role.

‘We have holdings in companies such as Wilmington, the information and data specialist and the consultant RPS Group, both of which have been through a period of positive change which is what we look for,’ he says.

Another option is an Aim EiS such as those offered by Guinness Ventures. Gallwey says: ‘We close the scheme at the end of the tax year and then invest the cash in about 20 companies. The minimum investment is £20,000.’

Anyone involved in Aim emphasises the thrills and the spills – exemplified by biotech group Synairgen. Its shares have shed 84 per cent of their value this year in the wake of failed trials for its antiviral drug. Some investors will shrug their shoulders and hope for better. They are the sort of people best suited for Aim.