Barclays shares fell for a fifth day after a top investor offloaded a £900million stake in the bank.

An unnamed institution sold 599m shares in the group – equal to 3.6 per cent of the its stock.

The sale is another headache and an early test for boss CS Venkatakrishnan, pictured right, who succeeded Jes Staley last year. 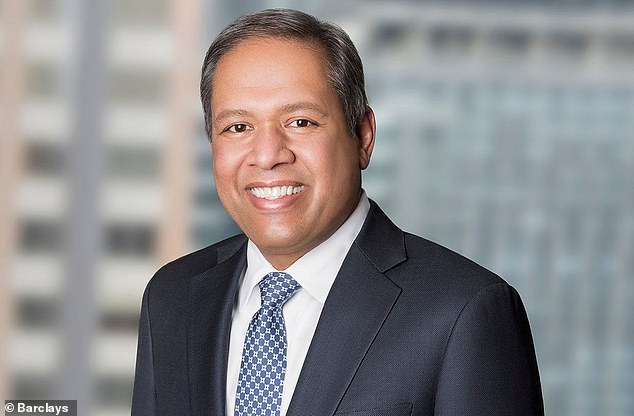 Barclays boss CS Venkatakrishnan (pictured), who succeeded Jes Staley last year, has seen around £2.8bn has been wiped off the company’s value in the space of a week

It came a day after the bank revealed it is facing a £450million hit and regulatory investigations after it made a mess of selling basic trading products in the US.

The error has meant the bank has halted the sale of new retail structured products in the US while regulatory probes are carried out by the authorities.

Around £2.8billion has been wiped off the company’s value in the space of a week. FTSE 100-listed Barclays was worth around £26billion last night.

Its share price has lost more than 16 per cent of its value this year. Venkatakrishnan, 56, has been attempting to clean up the bank’s reputation since he was swiftly made chief executive in November.

Staley resigned in scandal over his personal ties with paedophile financier Jeffrey Epstein. But Venkatakrishnan – known as Venkat – has had a rough start.

The US sales blunder that emerged at the start of this week was particularly embarrassing for him as he was chief risk officer at the time it occurred in 2019.

The error also means Barclays will need to delay a £1billion share buyback programme announced in February until after the first-quarter results in late April.

Victoria Scholar, head of investment at Interactive Investor, said the sales debacle was the ‘first notable setback’ for Venkatakrishnan.

Scholar added: ‘The stock sale acts as a sign of softening investor confidence towards Barclays and its new management.’

Goldman Sachs, which ran the sale, did not identify the seller.

Capital Group, another significant shareholder, sold 399million shares on Monday, but it was not clear if this was connected to yesterday’s sale. QIA offloaded 1.2 per cent of FTSE mining giant Glencore for around £796million last week.

The sovereign wealth fund first invested in Barclays in 2008, when it raised billions of pounds to avoid a government bailout. It trimmed its stake last year.

In December – weeks into Venkatakrishnan’s leadership – Barclays, HSBC and NatWest were also forced to pay £293million to the European Commission for their roles in a foreign currency trading cartel via a chatroom named ‘Sterling Lads’.

Venkatakrishnan has been with Barclays since 2016 after more than 20 years with JP Morgan.

harrry
Previous articleWhy custom makeup boxes are so good to be utilized?
Next articleWHAT IS A GAME CREATOR AND DESIGNER…………