TV’s Martin Roberts talks to ME & MY MONEY 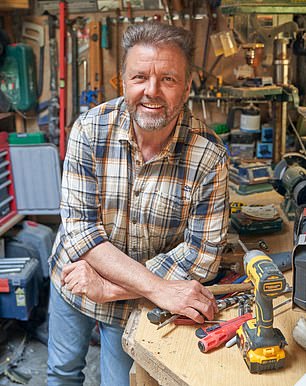 Housing boom: Martin Roberts has visited 3,000 properties with Homes Under the Hammer

The biggest money mistake that BBC TV presenter Martin Roberts ever made was investing in overseas property.

The Homes Under the Hammer star told Donna Ferguson he lost so much money in the 2008 financial crisis that he had to borrow from his father to pay for petrol to put in his car.

Roberts has developed a training course that teaches investors how to buy, renovate and rent out property in a profitable, but ethical way.

That there are more important things in life. Happiness, for instance – money doesn’t buy it. Both my parents were research scientists at industrial giant ICI. They were from working class backgrounds. I don’t remember money being tight, but I wouldn’t say we were well off.

I invested in overseas property. It went really well until the credit crunch of 2007 and 2008. Like lots of people, I was caught out by the collapse of the overseas property market – in Spain in particular. It took me to a scary place. I now understand what it’s like to be awake in the middle of the night trying to prioritise bills that need to be paid, crying a lot and suffering enormous stress.

Investing in overseas property was the biggest money mistake I have ever made. It almost took me to the cleaners. During that period, I struggled to pay personal and business bills. At one point, I had to borrow the money off my dad to fill up my car with petrol.

I ended up losing all the properties I owned in Spain and other parts of the world. In total, I probably lost a couple of million pounds. It’s scary thinking about it.

Yes, for appearing in a Vidal Sassoon commercial. At the time, I was working at a local radio station for £25 a week trying to break into television.

I showed up with a haircut that had cost £4.50 at a barber’s in Manchester and got picked to be the face of Vidal Sassoon in the United States for a year. They didn’t change my haircut, they just puffed up my hair a bit.

I signed a contract on the day of filming and ended up getting paid £30,000 over two years. I felt pretty rich, but then I discovered that if I had negotiated properly I would have earned £300,000.

There hasn’t been one outstanding year because I’ve been a steady earner. But 2003 was the most important financial year of my life because that was when I started presenting Homes Under the Hammer. We make 80 episodes a year and I’d estimate I’ve visited approximately 3,000 properties during filming.

In retrospect, though, I should have negotiated a better contract. I don’t earn anything like what people think I do.

It was a house in Stockport. I asked the owner why she had bought it and she replied: ‘Because of you.’

She told me that when her mother was dying in a hospice they had watched an episode of Homes Under the Hammer. Her mother had said: ‘When I die, I’m going to leave you some money and you must do what this man tells you to do’ – and pointed at me on the television. That’s why we were standing there in Stockport. That’s why she had bought that house.

It brought tears to my eyes. It made me realise that when you do daytime TV, you’re often part of people’s lives at a time when things aren’t going well. They might have been made redundant, they might be ill – you are holding their hand through difficult times.

The most expensive thing you bought for fun?

It was a second-hand, 15-yearold Aston Martin DB9 for £40,000. I bought it three years ago. It’s a gorgeous metallic baby blue with a cream leather interior.

It was an extravagance, but I always wanted one. For me, an Aston Martin and electronic gates at home mean you’ve made it. I haven’t got the gates yet.

I did up the kitchen and bathroom and sold it two years later for £56,000. Over those two years, I’d earned £2,000 working for a local radio station while my house had delivered a profit of more than £30,000.

The penny dropped – I kept on investing in property.

Do you invest directly in the stock market?

No. I don’t understand it enough – not the way I understand property.

I have a mix of investment properties – buy-to-lets and holiday lets. They are my pension.

I also own my home which is the second property I ever bought. It’s a Grade II-listed, four-bedroom house in a village just outside Bath.

It was rundown and derelict when I purchased it in the early 1990s for just over £100,000. It’s worth considerably more than that now.

But I’ve lived here for some 30 years and I never plan to sell it. It’s not an investment, but a home.

What is the one little luxury you like to treat yourself to?

When I was a child, I yearned after Dinky toys that my parents could never afford to buy me. So every few months, I now go to a toy fair and buy a vintage Dinky toy for up to £100.

If you were Chancellor what would you do?

I would stop penalising landlords for providing people with places to live.

Landlords should be able to deduct business expenses from their business income – and not be penalised with a raft of taxes.

I would also increase the amount Government gives to charity.

There are lots of key things done by charities that should be paid for by the State, so I would instigate a scheme where the Government matched every pound raised for charity.

Do you donate to charity?

Yes, I do, but I tend to donate by giving my time – doing auctions for the NSPCC and other charities. I can raise hundreds of thousands of pounds at a charity auction event which is a lot more than I can afford to give. I’ve also got my own children’s charity, Martin Roberts Foundation, which is all about children’s mental wellbeing and safeguarding.

To remember what my parents taught me: money doesn’t buy you happiness. I never want to lose sight of that.