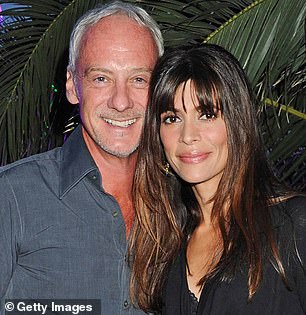 Retreat: Anton Bilton (pictured with wife Lisa B) set up Raven Property in 2005

A property company set up by millionaire tycoon Anton Bilton has pulled out of Russia and delisted from the London Stock Exchange.

Raven Property, which owns warehouses in cities including Moscow and St Petersburg, said sanctions imposed on Russia since the invasion of Ukraine have ‘completely compromised’ its business.

The firm, set up in 2005 by Bilton, husband of American model and actress Lisa B, was among a handful of Russia-focused firms booted out of the FTSE indices earlier this week, dealing a blow to its reputation and depriving it of investment from tracker funds.

Matters worsened yesterday when Raven said sanctions made it ‘impracticable for the business to continue in its current form’.

It has drawn up plans to scrap its LSE listing and transfer its business to a Cyprus-based company controlled by its Russian management team.

The sale, which will be for a ‘nominal cost’, and the de-listing are expected to be backed by major shareholders, which include asset managers Quilter and Schroders.

Bilton, 57, who serves as the group’s executive deputy chairman, has also backed the plans alongside the rest of the company’s directors.

The plans mean Raven Property will effectively be left as a shell company, with any assessment of its value or that of its Russian business deemed to be ‘unfeasible’ unless sanctions were lifted.

The end of the company’s stock market listing follows a brutal period for its share price, which has plunged 88 per cent so far this year.

It left the firm’s shareholders nursing heavy losses, with Bilton seeing over £12million wiped off his fortune. Trading in the shares was suspended yesterday morning.

Austrian based Raiffeisen Bank International, which makes a third of its profits in Russia, is considering leaving the country – just weeks after it vowed to stay.

The lender has 4.2m customers and 9,400 staff in the country. A fortnight ago, its chief executive Johann Strobl told investors: ‘It’s very important that you understand, we are not walking away.’