Ukraine fears rock global markets: Oil price surges towards $100 a barrel as £45bn is wiped off value of UK shares

By Hugo Duncan for Daily Mail


Tens of billions of pounds were wiped off the value of British shares yesterday as worries about war in Ukraine sent global stock markets into a tailspin.

The rout cut the value of London-listed companies by £43.5billion with Russian steel giant Evraz the biggest loser – plunging 29 per cent. 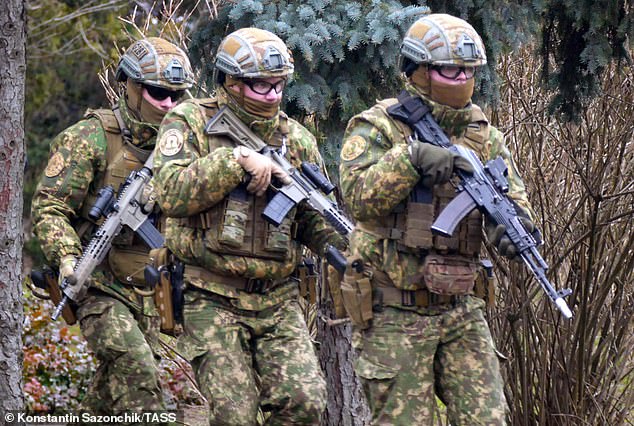 Ukrainian soldiers take part in drills near the border with Crimea. Worries about war in Ukraine sent global stock markets into a tailspin

Across Europe indices in Frankfurt and Milan were down 2 per cent, Paris 2.3 per cent and Madrid 2.6 per cent. At the same time, oil rose above $96 a barrel for the first time since October 2014.

Marc Kimsey, an equity trader at Frederick & Oliver, said: ‘All bets are off, bar oil. Traders are speculating on oil hitting $100, with a week of rising Russia-Ukraine tensions ahead.’

The US dollar made gains against major currencies, including the pound and the euro as investors sought out the relative safety of the greenback.

Francesco Pesole, a foreign exchange strategist at banking group ING, said: ‘Headlines about Russia-Ukraine geopolitical tensions have taken centre stage again. This week is set to be a pivotal one to gauge how the geopolitical situation develops.’

Investors were also spooked by mounting speculation of interest rate rises in the UK and the US next month as central banks step up the fight against inflation.

Official figures last week showed that US inflation was at 7.5 per cent, the highest for 40 years.

BP to stay in Russia

BP’S boss said the oil giant has no intention of severing ties with Russia’s state oil firm Rosneft despite the threat of war with Ukraine.

Bernard Looney said it was ‘sticking with’ the business.

BP has worked in Russia for more than 30 years and is the largest foreign investor in Rosneft, with an almost 20 per cent stake.

Analysts warned BP and rival Shell could be hit by sanctions if Moscow invades. US President Joe Biden is said to be weighing up unprecedented sanctions and has warned that ‘things could go crazy quickly’ in Ukraine.

Looney said: ‘We, along with many of our peers have a large presence in Russia and, quite frankly, there is no impact on our ongoing operations in Russia.’

He added: ‘We are sticking with the business of business in Russia and let’s see what will happen. If there are sanctions or whatever, then we will fully comply with them.’

Rosneft contributed around 21 per cent of BP’s bumper £9.4billion profit last year – its highest since 2013.

That provoked more angry calls for a windfall tax on oil company earnings as Britons battle an energy crisis that is piling pressure on living costs.

‘Just as the storm of Covid appeared to be receding, the growing expectation of an invasion of Ukraine is the fresh threat now unnerving investors, with confidence plunging in many parts of the world,’ she said.

‘With worries that inflation is already running far too hot, the possibility Russian troops could move across the border has led to another surge in the oil price.

‘Energy markets are clearly on edge and if supplies are threatened there is a risk oil will shoot up even higher, adding to price pressures for companies.’

Airlines and travel companies were among the stocks in retreat amid fears that war in Europe would hit demand.

Wizz Air was down 6.3 per cent and British Airways owner IAG was 5.6 per cent lower. Cruise company Carnival fell 4.8 per cent.

A report by Capital Economics warned war in Ukraine could push oil to $120 a barrel and add 2 percentage points to inflation in developed markets.

That would tighten the squeeze on living standards in the UK where inflation is forecast to hit 7 per cent this spring.

And it could force the Bank of England to raise interest rates even further in an effort to keep a lid on prices. Simon MacAdam, senior global economist at Capital Economics, said: ‘A Russian invasion of Ukraine or severe ratcheting up of sanctions would add as much as two percentage points to inflation in developed markets, particularly in Europe.

‘Given the inflationary backdrop and hawkish signals from central banks, monetary policy could be tightened more aggressively as a result.’

Mark Haefele, chief investment officer at UBS, said: ‘We still think diplomatic efforts will eventually lead to a dialling down of tensions.

‘This may take several months, during which the possibility of flare-ups like the one we are experiencing today remains elevated.’

Abramovich given a kicking 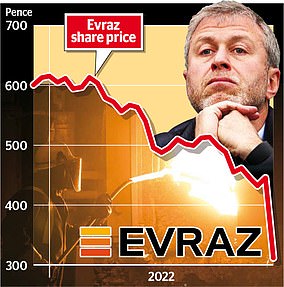 The billionaire saw the value of his 29 per cent stake drop from over £1.8billion to £1.3billion.

His holding has almost halved since the start of the year, wiping £1.2billion off his fortune.

Evraz has been hammered as investors worry about the impact of wide-ranging sanctions on Russia if it invades Ukraine.

Abramovich, 55, is the largest investor after buying in 2006.

The huge paper loss comes as Boris Johnson said the evidence was ‘pretty clear’ that Russia was planning an invasion, with Moscow massing up to 130,000 soldiers on Ukraine’s borders.