An Australian investment bank known as the ‘Vampire Kangaroo’ is preparing to pounce on a vital part of the UK’s gas grid.

Sydney-based Macquarie has tabled an early offer for National Grid’s gas transmission business that would value the unit at £7.5billion, according to reports.

It is looking to take a controlling stake in the division, which operates more than 4,000 miles of gas pipes in the UK. 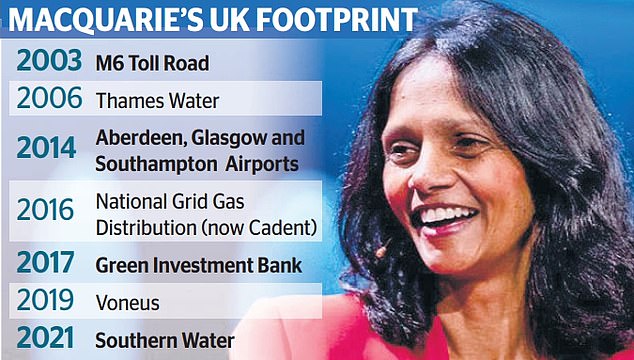 But the sale would put a key part of the gas network in the hands of an Australian firm while the UK is in the grip of the most extreme energy crisis in a generation that is crippling households and businesses.

FTSE100-listed National Grid has been looking for an outside group to take a majority stake in the transmission unit since last year. But the presence of Macquarie, which is run by Shemara Wikramanayake (pictured above), is likely to worry many in the City because of the company’s questionable track record of investing in some of Britain’s biggest firms.

It earned its ‘Vampire Kangaroo’ nickname after developing a reputation for buying companies, loading them with debt and sucking out as much money from them as possible for shareholders. And it comes at a time when foreign investors are under increasing scrutiny as fears grow that the UK is losing control of key businesses and infrastructure.

Any deal, if it were to materialise, would automatically be referred to the Business Department to be assessed under the National Security and Investment Act. This would investigate whether the sale of a controlling stake to an overseas buyer could put Britain at any risk.

Macquarie has British roots, being formed from the Australian branch of London merchant bank Hill Samuel in 1969, before changing its name in 1985. It has a swathe of UK assets and claims to have ploughed more than £50billion into UK infrastructure projects in recent years. The company bought the Green Investment Bank, now called the Green Investment Group, from the Government in 2017.

It owns Aberdeen, Glasgow and Southampton Airports with Ferrovial, as well as broadband network Kcom and last year took a large stake in Southern Water.

But the group is still best known for its reputation-damaging ownership of Thames Water from 2006 to 2017.

Over the course of slightly more than a decade in charge of the water company, Macquarie paid out almost £3billion in dividends while amassing debts of £10bn and using a complex – but legal – corporate structure that meant it paid almost no corporation tax in the UK.

A Macquarie spokesman said: ‘The UK is one of the best places in the world to invest in, and from. Over the next few years, we’ll progress important new investments in communities from Southampton to Orkney, in vital new infrastructure from offshore wind to ultra-fast broadband.’