Yet in just one week, three supposed experts let slip outlandish remarks that have provoked fury among ordinary people.

First was the Bank of England governor Andrew Bailey, with his misjudged suggestion that workers should not be asking for big pay rises, despite facing the worst cost-of-living crisis in a generation.

This from the man who earns more than half a million pounds a year. 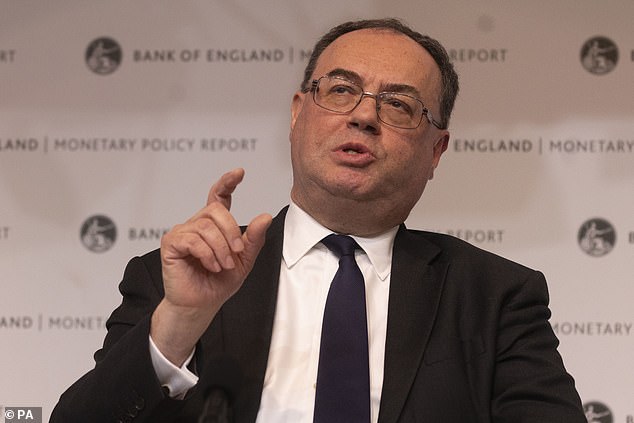 Out of touch: Bank of England governor Andrew Bailey believes workers should not be asking for pay rises despite facing the worst cost of living crisis in a generation

We are all worried about spiralling prices, but you cannot expect the everyday person trying to do the best by their family to forgo a vital pay rise that would ease the squeeze on their income.

Next we had property guru Kirstie Allsopp, who stirred up a storm at the weekend by suggesting that young people who cannot afford to get on the property ladder have only themselves to blame.

Just move somewhere cheaper and stop frittering away your money on coffees and Netflix subscriptions, the TV presenter advised — after admitting she bought her first home with help from her family.

There is an element of truth to what she says. Saving for a deposit does require ‘enormous sacrifices’.

But you cannot ignore the wider picture, where average house prices have soared by 11 per cent in a year to £255,556. This means scraping together almost £13,000 to put down a 5 per cent deposit.

And because wage growth has not kept up with rising prices, the average first-time buyer now has to cough up five-and-a-half times their typical annual earnings to buy a house — up from a previous long-term average of 3.8 times.

While seeking to defend the Prime Minister’s claim that crime is falling, he said fraud and online scams were not problems that ‘people experience in their daily lives’.

Yet at Money Mail, rarely a day goes by where we do not hear at least one harrowing tale from a reader who has been tricked into handing over their life savings to sophisticated crooks. From parcel delivery scam texts to dodgy investments, there is no escape.

And the impact on people’s ‘daily lives’ is devastating. As well as the financial loss, many victims suffer long-term emotional distress and relationship breakdowns.

Fraudsters also use the money stolen to fund serious organised crime such as terrorism, people trafficking and drug importation. So it’s unforgivably foolish to belittle fraud when it is a crime that affects us all.

Perhaps those in more privileged positions would do well to think before they speak.

Complaints about British Gas HomeCare continue to stream in after we presented it with our Wooden Spoon Award for shoddy customer service last week.

It has now emerged that the City watchdog is aware of the problems and is poised to intervene.

British Gas had written to say her annual policy would be increasing by £5 a year.

But spurred on by our article last week, she called to demand a cheaper deal and was swiftly rewarded with a £100 price reduction, free added plumbing, drains and electric cover and a £65 refund because she had not received her annual boiler service.

‘I have accepted this offer, but I do think all loyal customers should be offered new deals automatically, without having to ask,’ she says.

I couldn’t agree more — but given that most firms are more concerned about protecting their bottom lines, for now it’s down to customers to fight their corner.

For parents concerned about the new ‘Mum and Dad’ WhatsApp scam, Money Mail reader Bill Dearing has a useful tip.

He says: ‘When my stepdaughter went travelling a few years ago, we set up a distress password and any text message or email had to state this to prove it was genuine. Anything random will do. Even if you don’t do this, just asking for one would put most scammers off.’

harrry
Previous article
Aaliyah’s Music Is Finally Coming To Streaming Services, But There’s A Catch
Next article
Why it’s time to have a flutter on the FTSE: US tech giants stumble