Grow your hair long, dig out your beads, don your kaftans and get ready to hit the hippy trail again.

On the road to San Francisco or Marrakesh, one vehicle above all encapsulated the 1960s spirit of flower-power and free-love — the Volkswagen Type 2 ‘Microbus’ built between 1950 and 1979 in Europe.

It is arguably the best known Volkswagen after the original Beetle and now it’s been reincarnated in 21st-century guise as a ‘green’ fully electric zero-emissions model called the ID Buzz. 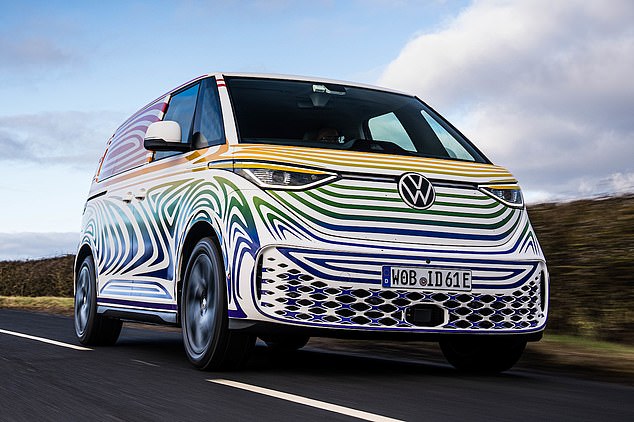 In disguise: The VW ID Buzz has a temporary colour scheme ahead of its launch next month

A favourite among surfers, there are thousands still on the road, lovingly restored and cherished, spawning fan clubs and hired out to holiday-makers smitten with the compact size but practical performance.

Over the years it has had lots of names — both official and unofficial: ‘Type 2’, ‘Microbus’, ‘Kombi’ ‘Bus’, and Transporter.

I have fond memories of a 2,000-mile family trip in a bright orange rear-engine VW campervan in my early teens as we headed from Newcastle to the Channel ferry, across France, into Germany’s beautiful Black Forest, skirting the Alps into Austria.

Ahead of the ID Buzz’s official world premiere on March 9, I’ve been lucky enough to drive a pre-production model on UK roads and after having a whale of a time at the wheel, here’s my prediction.

Even though it won’t be a cheap option — expect prices to start from around £50,000 — it’ll sell like hot cakes.

I travelled to Volkswagen’s UK headquarters in Milton Keynes — a city designed for cars and with more roundabouts than a children’s funfair — to take one for a spin.

As with the original, there will be two versions. The first is a standard ‘civilian’ five-seater ID Buzz for families, couples and adventurers, which is the version I drove. 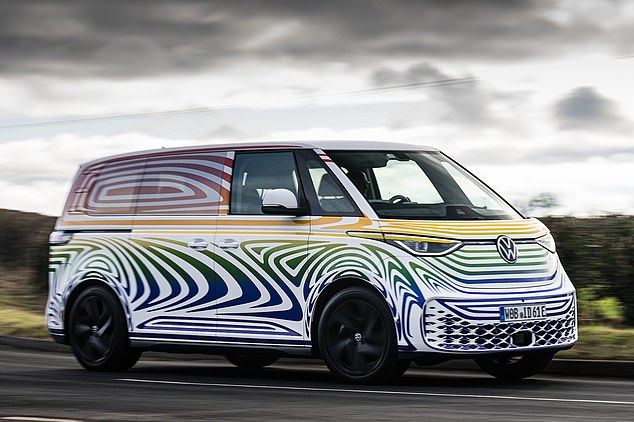 Coming soon: Production of the new ID Buzz starts this summer with first UK deliveries planned from autumn and order books opening in May 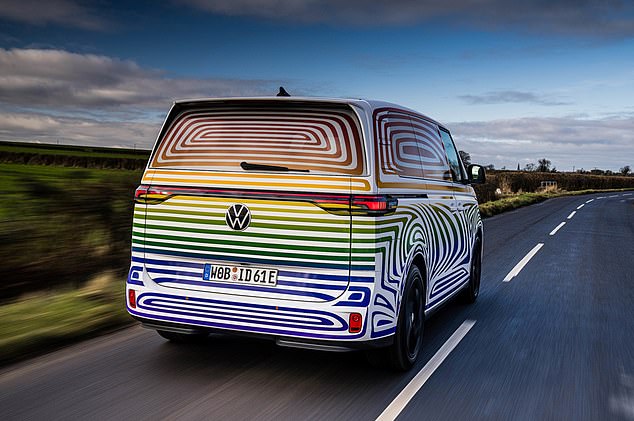 All electric: Launch editions of the new ID Buzz will be propelled by a 150kW electric motor on the rear axle, with a two-motor all-wheel drive version expected to follow 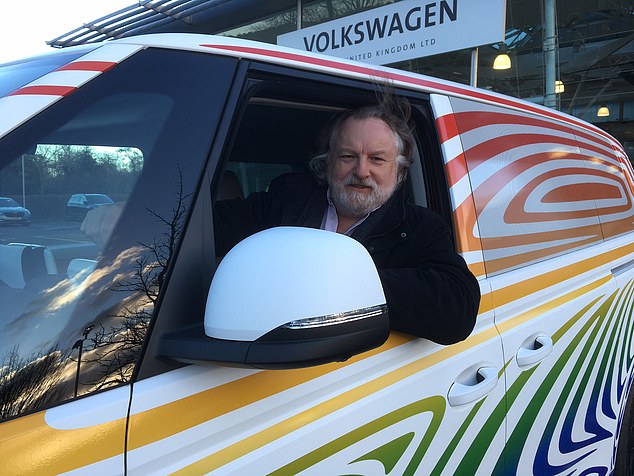 On the road: Ray gets behind the wheel of the standard ‘civilian’ five-seater ID Buzz, targeted at  for families, couples and adventurers

Though designed as a people carrier, work is underway creating campervan versions, with everything including the kitchen sink, for staycations and more.

There’s also a commercial ID Buzz Cargo van variant — with a three-seater bench seat at the front but without the rear windows and (happily for buyers) exempt from VAT.

Will it fit in my garage? Volkswagen ID Buzz

Production of the new ID Buzz starts this summer with first UK deliveries planned from autumn and order books opening in May.

I attended the unveiling of the original concept version at the Detroit Auto Show in 2017 when its retro look with a modern twist caused a stir.

Climbing inside, I was immediately struck by how much that sensation resembled the original.

Launch editions of the new ID Buzz will be propelled by a single 150kW electric motor on the rear axle, with a two-motor all-wheel drive version expected to follow. It also has a 77kWh battery.

And the vivid psychedelic colour scheme on my vehicle is actually a light disguise ahead of the official unveiling next month.

Although, I’m not the first person to suggest it be offered as a standard colour palette — it’s brilliant.

The car has two sliding doors at the rear — one each side — which makes it easy to get in and out of.

Then there’s a hefty amount of space for luggage (1,121 litres) and even more if you put down the rear seats.

There’s a handy drop-down loading sill when you open up at the rear. It’ll tow a ton behind it.

Ahead of the official launch, swathes of the dashboard trim were covered up. But I got a good sense of a simple, contemporary design with shades of a 1960s ice-cream parlour colour palette.

Once in that high driving position, the drive switch is on a stalk near the steering wheel, with a twist-forward switch that resembles the hand movement on an old can opener. Underway it offers a smooth but fast-paced drive.

Top speed is 90mph, which is fast enough for a fun family runaround. Acceleration, range and charging times are yet to be confirmed.

But it feels sprightly around town — particularly the roundabouts. There’s plenty of poke when you put your foot down.

Evolution of the ‘Microbus’

One surprise is its turning circle, given officially at around 11 metres. That really didn’t mean much to me until I tried it for myself attempting a particularly tight U-turn. It was like a London taxi.

The new ID Buzz is being built at VW’s factory in Hanover, northern Germany, from where our Royal Family’s forebears hail.

But there’s another British twist to the tale. The main VW factory at Wolfsburg was created to build Adolf Hitler’s original ‘People’s Car’ — the ‘Volkswagen’ for the masses.

By war’s end, the Wolfsburg factory was a bombed-out ruin.

But a plucky bunch of occupying Brits, led by Major Ivan Hirst of the Royal Electric and Mechanical Engineers, got the factory going again building Beetles as transport for the occupying authorities. 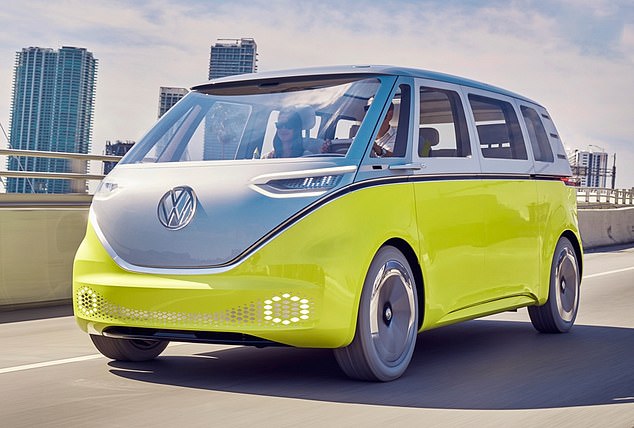 Forerunner: An early concept version of electric iD Buzz which was unveiled in 2017

To shuttle parts around the plant, they adapted the Beetle chassis by putting a flat metal plate on it as an improvised low loader with the driver at the back looking forward across his load. The Germans called it a ‘Plattenwagen’.

When Dutch car importer Ben Pon visited Wolfsburg in 1946, intending to purchase Beetles for import to the Netherlands and later the USA, he spotted one of these Plattenwagen and saw even greater potential for it.

He sketched a doodle of a vehicle — based on the Plattenwagen — dated April 23, 1947, but placing the driver at the front.

The idea of the VW Microbus was born. When it finally made it into production in 1950, it was called the ‘Type 2’, the Type 1 being the original VW Beetle.

Welcome to the first garage run by women

The In Town Automotive garage in Northampton is headed-up and run by an all-female team — believed to be a first in the industry.

Fed up with feeling intimidated and undermined when taking her car to the garage, centre manager Kim Dorr decided to embark on a career in the industry to dispel common stereotypes associated with garage forecourts. 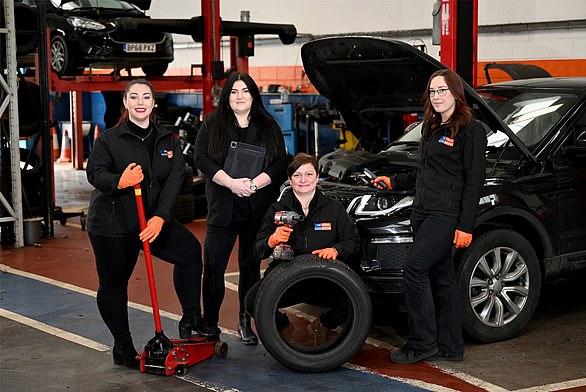 Female force: In Town Automotive in Northampton is headed-up and run by an all-female team – believed to be a first in the industry

And now she is leading a team dealing with servicing, tyres and MoT tests — to create what she believes is the most welcoming customer environment in the sector.

That includes setting up a children’s play area, a flat-screen video feed to show live updates of technicians’ work and even bunches of fresh flowers.

Their skills have already scooped awards, including the Automechanika’s Garage of the Year accolade.

It’s not a completely female-only environment, however. The quartet work with eight male technicians in the workshop.

Centre manager Kim said: ‘It is unique to have an all-female team, but when recruiting Leah, Alex and Karen, it was because they were the best qualified for the job, irrespective of sex. It was as simple as that.’