What are Stock Splits? Investing Explained


INVESTING EXPLAINED: What you need to know about Stock Splits, a move that makes shares seem more affordable to a wider range of investors

In this series, we bust the jargon and explain a popular investing term or theme. Here it’s Stock Splits

What are stock splits?

Public companies have a set number of shares, but the directors can increase it by issuing more to current investors.

If, say, there is a two-for-one split, then shareholders will receive two shares for each one they own.

The company’s stock market capitalisation will remain unchanged and so will the value of investors’ holdings. All other things being equal, its share price will halve after the split has taken place. 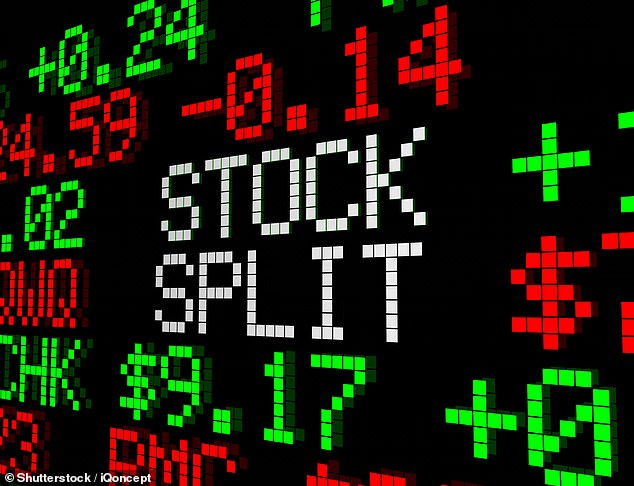 Key objective: Stock Splits increases liquidity, the ease with which shares can be bought and sold

A company is most likely to carry out a split if its share price has become very high. The move makes the shares seem more affordable to a wider range of investors which, with some luck, should boost demand.

It increases liquidity, the ease with which shares can be bought and sold.

There is a lot of psychology involved – original investors may feel boosted by the fact they own more shares, and they seem more accessible to newcomers.

A key objective of the exercise is to make investors feel more optimistic about the company’s prospects, although this is rarely stated.

Which companies are keenest on stock splits?

But this manoeuvre is much more common in the US where it is all the rage among the tech giants. Apple has split its stock five times since it went public in 1980 at a price of $22 a share.

The latest was a four-for-one split in August 2020. Adjusted for the split, Apple’s flotation price was $10.

The news seems to have enthused investors who piled in, driving the share price to $3,356 (£2,559). One reason was a desire to retain staff in a competitive labour market. The lower share price should make it easier to grant stock options to employees.

Alphabet, owner of Google, will be carrying out a 20-for-one stock split in July. Its shares stand at nearly $2,793 (£2,131) and the move should make them more accessible. It is said that the stock split could give Alphabet entry into the Dow Jones index, of which it is not a member as a result of its high price.

If Alphabet did join the Dow, index funds would be obliged to buy its shares, driving up the price again.

Not to be outdone, the company said this week that it is seeking approval to carry out a stock split, after its five-for-one split in 2020. The announcement lifted Tesla shares to $1,107 (£844). Boss Elon Musk is said to like the idea of making shares cheaper to increase the number of private investors, who may be less critical than institutions.

The class A shares of Berkshire Hathaway, the fund run by Warren Buffett, have hit $531,975 (£405,587), reflecting its status as a defensive stock in troubled times. A split would seem to be appropriate, letting more private investors take a stake. Buffett shows no sign of doing the splits.