Why are Mark Hartigan and Alan Cook still at LV?

Top bosses at LV have been paid more than £100,000 in just seven weeks after the collapse of a deal they concocted with a US private equity firm.

While they continue to haul in the cash, LV’s 1.2million members remain in limbo over the future of the mutual insurer. 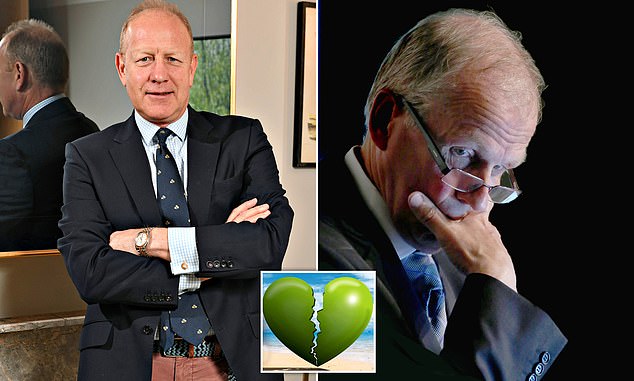 They suffered a humiliating defeat after LV members snubbed the ‘derisory’ offer in December, but remain in their lucrative posts raking in thousands of pounds a day.

As yet, members have had no update on what will happen next. So what is going on? The Mail on Sunday finds out.

What has happened at LV?

Members scuppered a deal concocted by Hartigan and Cook to sell the company to private equity group Bain.

The sale would have meant LV losing its cherished mutual status. Since it was established as Liverpool Victoria in the 19th Century to help poor families in Liverpool pay for funerals, it has been owned by members and run for their benefit.

Ownership by private equity would have meant handing control to a profit-hungry investor. Hundreds of policyholders contacted the Save LV Campaign in the weeks before the vote, outraged at plans to sell the mutual to a buyer likely to milk it for cash.

Hartigan and Cook, both in line for big gains under Bain, chose the private equity route in preference to a bid from fellow mutual Royal London. They refused to say why.

The upshot: members shot down Bain’s bid, which included an offer of a paltry £100 each to members – well below the sums paid out in previous demutualisations.

Why are the duo still there?

Good question. After their humiliating defeat, Cook promised to leave when a path for LV’s future was established. As things stand, he is still pocketing his £205,000-ayear fee as chairman. This tots up to £29,000 since the vote, which is only just below the median average full-time wage for a whole year.

Hartigan remains in his well-remunerated post despite an outcry from members. He has pocketed £72,000 since December 10. LV declined to comment on whether he would be handed a bonus for 2021.

In previous debacles, top bosses have been replaced with a credible industry heavyweight, brought in from outside to sort out the mess. A suitable person could be drafted by LV’s independent directors.

Labour MP Gareth Thomas, who chairs the All-Party Parliamentary Group for Mutuals, said: ‘It beggars belief both Cook and Hartigan haven’t had the courage to make way for new independent directors committed to a mutual and British future for LV. What’s even worse is they’re still trousering members’ money. They should go now.’

Tory MP Kevin Hollinrake, who sits on Parliament’s Treasury Committee, said: ‘It’s high time Cook and Hartigan left. Every day they stay they’re earning more of members’ money, and any delay is only acting in their interests.

‘Members want independent leadership to make sure any new deal gets done quickly and is in their best interests.’

Former Pensions Minister Baroness Altmann said: ‘There’s a strong case for members to request an independent assessment of the Royal London deal and the management’s actions, given what’s happened. Cook and Hartigan were clearly set on the Bain deal, and the tactics they used to try to persuade members were pretty strong-arm. But they didn’t work, and members will now want some reassurance.’

The announcement that the Bain bid had failed was accompanied by another, stating that Royal London wanted to step in with a new bid. Royal London was prepared to enter exclusive talks with LV and a deal seemed imminent. The original Royal London offer was almost identical to Bain’s and the new proposal has been enhanced so it will maintain LV’s mutual status.

What are LV bosses playing at?

They have decided to start from scratch, almost as if the years of talks to sell the business, including with Royal London, never happened. A spokesman said the calculations done back in 2020, when the process to find a buyer began, must be redrafted, since almost two years have passed since then. In the meantime, the clock is ticking lucratively for the expensive bankers, lawyers and advisers, all of whom continue to draw fees. The board is again assessing its ‘strategic options’.

It is understood not to be actively looking for new bids beyond Royal London. Options now include a possible wind-down of the business – letting current policies mature and then shutting up shop – or continuing to run LV as a standalone operator.

Could LV go it alone?

Bosses claimed in late 2020 it desperately needed cash to survive and thrive. They said it needed to invest in its technology and growth, but didn’t have the money to do this alone. So external investment from Bain or Royal London was better than using members’ cash, they argued. This was at odds with earlier declarations that it had a flourishing future as a mutual.

Another very good question. A full 50 days have passed without a peep from the LV board. The Mail on Sunday understands there have been ‘high-level’ discussions with Royal London, but Hartigan and Cook have so far refused to enter into formal talks. Have discussions stalled? It is not clear. A former LV executive said: ‘The board would be mad if they’re not in talks with Royal London. They’ve said they can’t stay independent, so a mutual merger looks like the only path.’

Nothing is certain. Sources close to Royal London suggested under its initial offer, more money would have gone to LV members than with Bain, but those figures were never made public. And there is no guarantee it will table the same bid.

Are my savings at risk?

No. Members’ money is not at risk, thankfully.