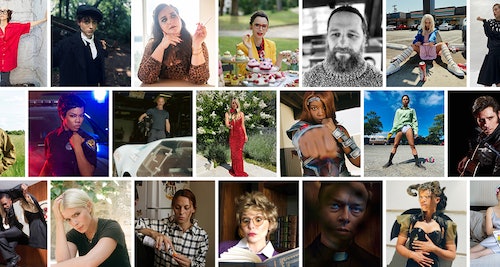 Last year, we asked your favorite television stars to celebrate the medium that’s brought them joy, comfort, and relief during a particularly trying time in the industry. This year, we invited more of television’s best and brightest performers to do the same—and they certainly delivered. From old reruns of classic sitcoms like The Nanny, to docuseries about enigmatic cultural figures like Hemingway, to addictive reality TV shows like The Bachelorette, the series that occupied the screens of your favorite celebrities are not that different from the ones we turned to every week to immerse ourselves in new and exciting worlds.

For W’s 2021 Television Portfolio, we asked 26 of the most sought-after names in television to pay tribute to their favorite small-screen characters by stepping into their shoes. Most of the actors featured here are Emmy-nominated and could win big on television’s big night in September. Now the question is: What are you watching?

Aidy Bryant as Adriana La Cerva From The Sopranos 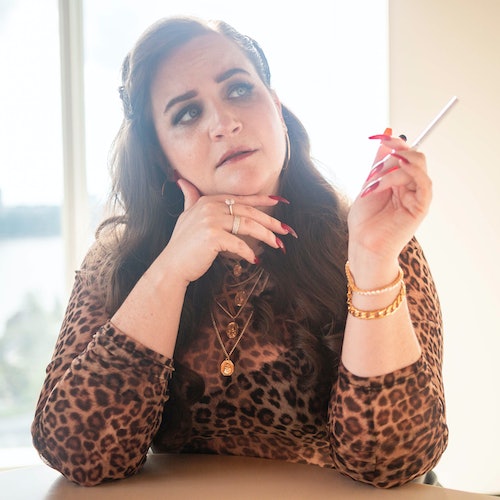 “If you haven’t seen the show, you’re insane,” the Emmy-nominated star of Shrill and SNL says of The Sopranos. “To me, it’s the greatest TV show ever made.”

Lili Reinhart as Beth Harmon From The Queen’s Gambit 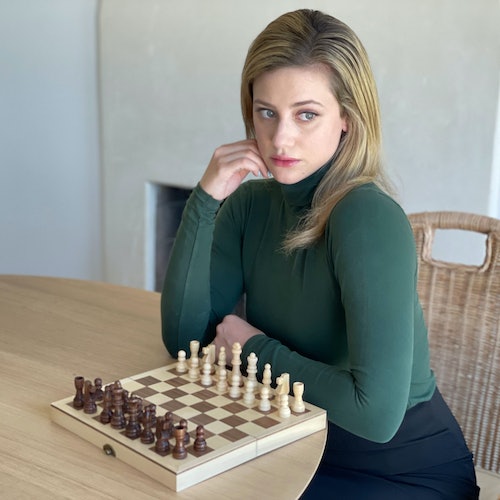 “I’m a sucker for a period piece,” says the Riverdale star. “And I liked watching a young girl become an adult—have her life completely change in just a few years. I relate to that.” 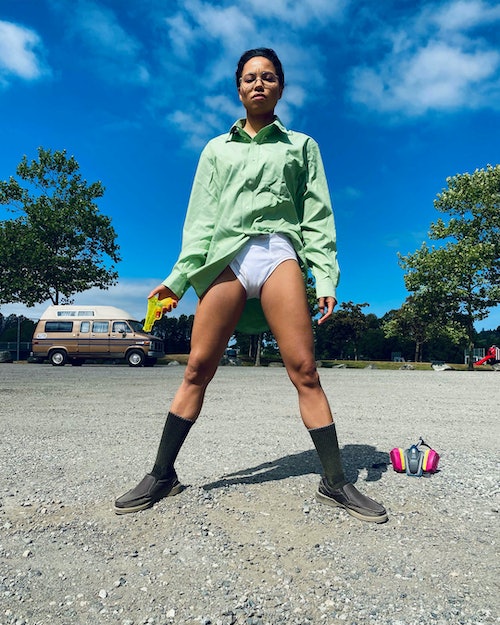 “Bryan Cranston is one of my favorite actors,” says the Emmy-nominated star of Lovecraft Country. “He’s such an antihero hero. [Laughs] He just raises hell.”

Kaley Cuoco as The Bachelorette 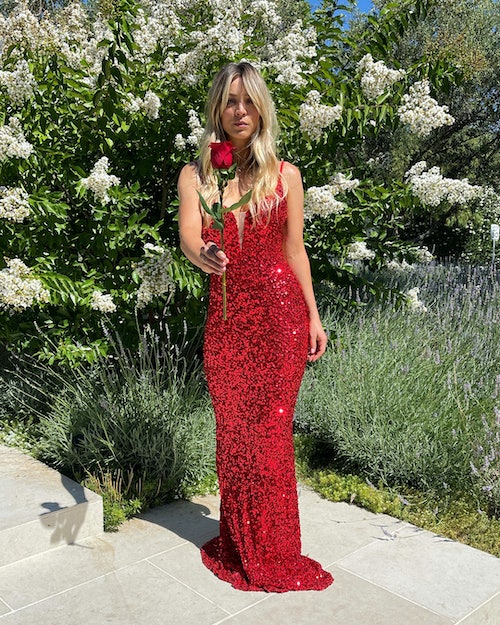 Colman Domingo as Halston From Halston 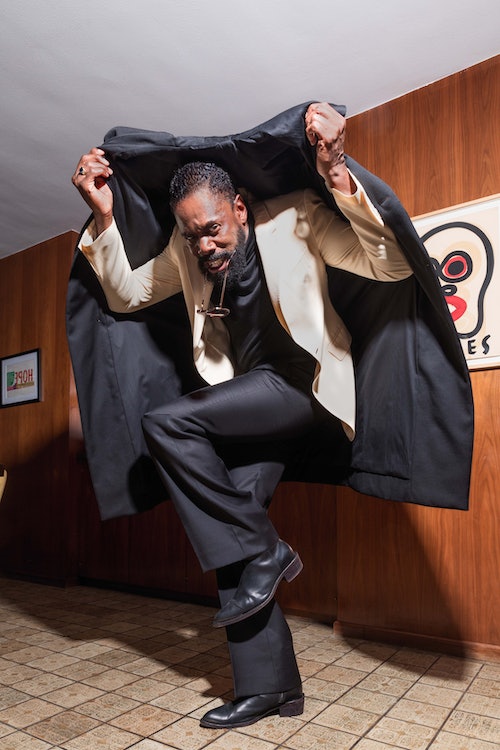 “He was of the times in many ways,” the Euphoria and Fear the Walking Dead star says of the legendary designer Halston (played by Ewan McGregor in the Ryan Murphy–produced miniseries). “He knew he had talent, but he also was trying to become more commercial. It was like the great argument of art and commerce, and fighting with integrity. And what does it mean to sell out and sell your name.” 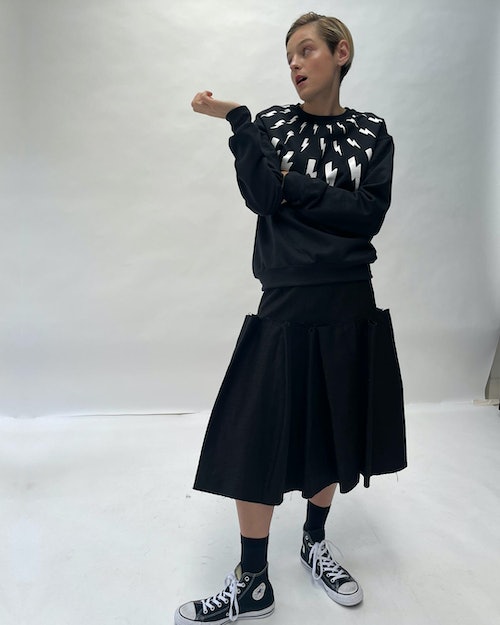 “Schitt’s Creek has become my go-to, comforting favorite,” says the star of The Crown. “It’s a they-feel-like-my-friends kind of TV program. I actually met Dan [Levy]. He’s the wisest, kindest, funniest person. I feel like we could have talked forever.”

Thuso Mbedu as Queen Maeve From The Boys 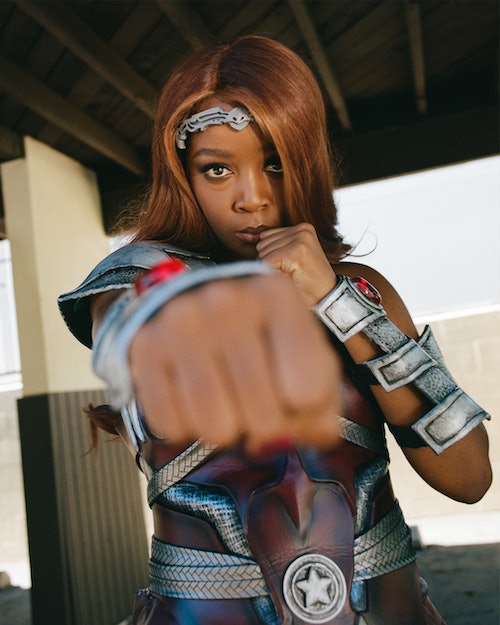 “I love superhero stories, but The Boys showed us superheroes in a very different light,” says the star of The Underground Railroad. “Queen Maeve stands for something bigger than what we see. She represents the erasure, or the misrepresentation, of the LGBTQ community. And for me, I related a lot to her, because what we see with this underrepresented community is what people of color have experienced.”

Phoebe Dynevor as Alex Levy From The Morning Show 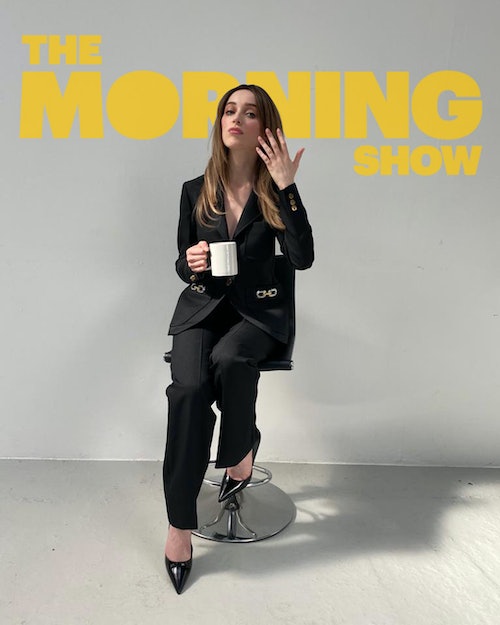 “I love her,” the Bridgerton star says of Jennifer Aniston. “She’s so lovable, but watching her take on a powerful role like in The Morning Show was so exciting. It was one of those shows I stumbled across in lockdown. The way it talks about male power, and what it means to be a female at the top of their game, was something that I thought was very interesting, and very of the time.” 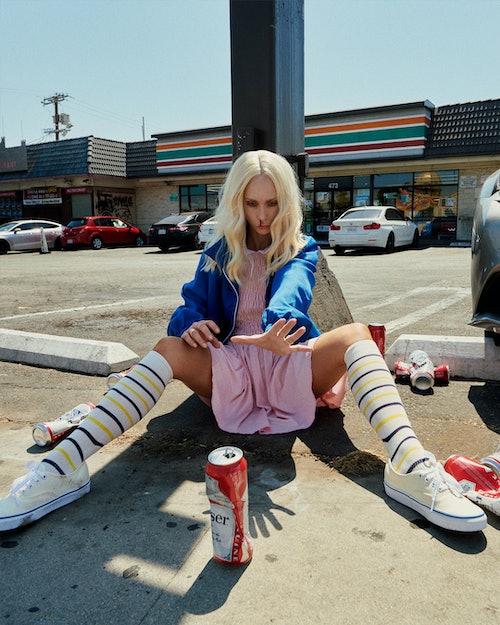 “There’s something about the American childhood that is just so very different to what I grew up with that I find deeply fascinating,” says the Emmy-nominated Ted Lasso star. “I was completely besotted by this incredible ’80s fantastical world and the beautiful friendships between these children.”

Brandee Evans as Athena Grant From 9-1-1 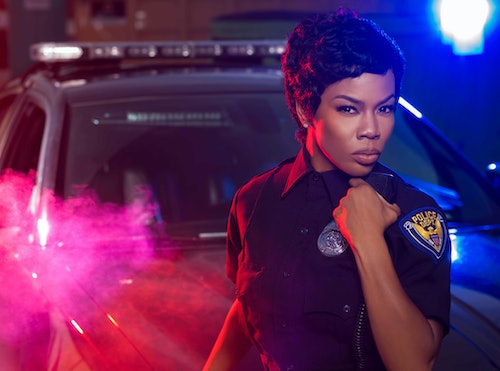 “First of all, I’m a diehard Angela Bassett fan. So if she’s in it, I’m watching it,” the P-Valley star says of 9-1-1, before offering a hint about the show’s second season: “There’s something I can’t say. But when season 2 comes out, you’re going to know exactly why I’m excited about this mental relationship that I feel that I have with Angela Bassett.”

Elizabeth Olsen as Jessica Fletcher From Murder, She Wrote 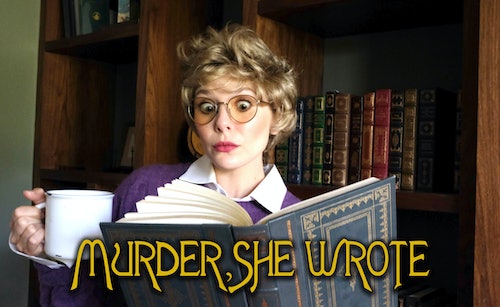 “My favorite moment is when they solve it, and play it out for you in the solving of the mystery and going backwards,” the Emmy-nominated star of WandaVision says of the classic series. “It’s just delicious, and it feels good to watch.”

Christian Serratos as Fran Fine From The Nanny 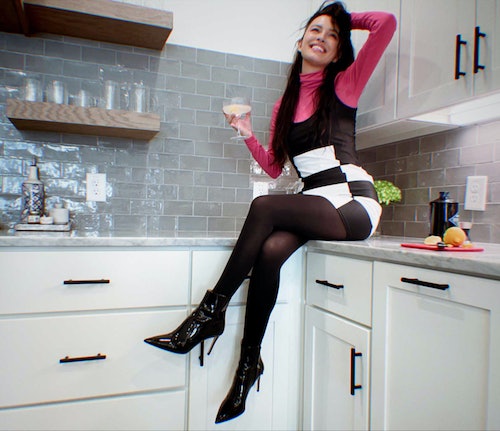 “People don’t talk about what a fashion icon Fran Drescher was,” says the Selena: The Series star. “She’s got a lot of looks! Some of her stuff felt super ʼ60s, but other stuff felt very of its time. The stockings with every outfit were epic, very ʼ90s and fabulous.”

John Stamos as Elvis From the ’68 Comeback Special 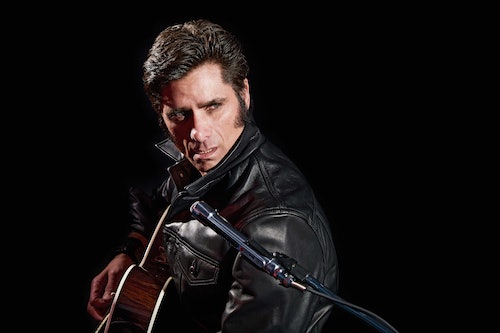 “I always go back to what’s comfortable, musically, especially,” the Big Shot and Full House star says of how he coped during the early days of the pandemic. “I love Elvis Presley, so I watched the 1968 Comeback Special again. At the end of it, there’s a song called ‘If I Can Dream.’ When he started singing it, I just started crying. It was right after Bobby Kennedy had been shot, and Martin Luther King Jr. He felt like, I can’t just be singing about girls and shaking and hound dogs; I have to plug into what’s happening in the world and the country.”

Savannah Welch as Mare Sheehan From Mare of Easttown 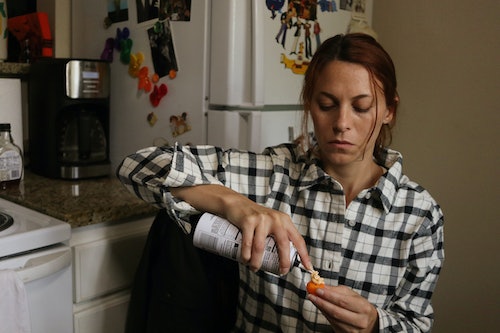 “Her character wasn’t a pretty version of a detective,” Welch, who plays Barbara Gordon on Titans, says of Kate Winslet’s Mare. “The young mother [Erin], although she had a very small role, stole the show for me. Even though I was 27 when I had my son, I could relate to that kind of loneliness, and the desperation, and feeling a bit…I don’t want to say ostracized, but just because of the new reality, friend groups that weren’t really there yet, or didn’t have children yet and couldn’t relate to them anymore.” 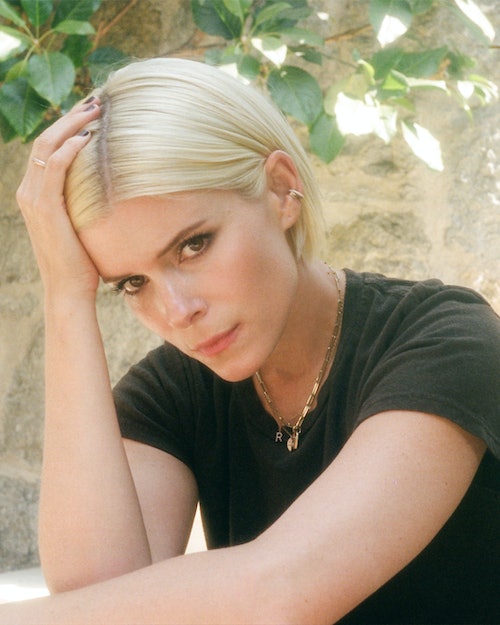 “Andrea Riseborough [who plays Emma] is a friend of mine,” says the star of A Teacher. “Every time I see her in anything, I’m just blown away. She’s so good at being seemingly in control, yet unhinged. There’s something about her that is so multilayered, and you just never really know what she’s going to do.”

Justice Smith as an Agent From Call My Agent! 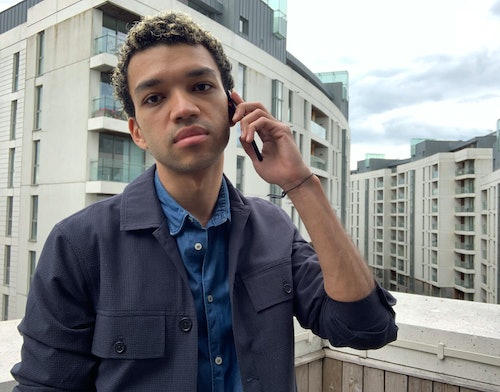 “It’s just me on the phone, with a backdrop of what I tried to make look like Paris, but really is just Northern Ireland apartments,” the Genera+ion star says, laughing. “And it’s me wearing a blazer because I’m like, agents are always wearing a blazer.” 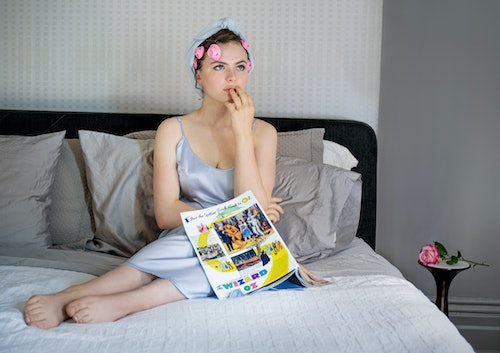 “I’m a huge fan of the show,” the Cruel Summer star says. “It’s fun and stylistically super exciting seeing such an incredible female actress take on that character. I am generally drawn [to] and work on really dark projects. There was a great opportunity for me here to show how much I like comedy as well.”

Naomi Ackie as Arabella Essiedu From I May Destroy You 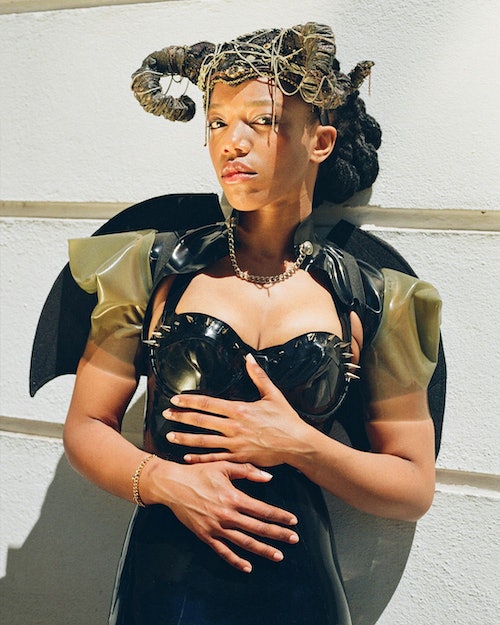 “We need more shows like this!” the Master of None star says of Michaela Coel’s groundbreaking series. “Not just about consent, but about many things that we are still arguing over the subtleties of. The discussion outside of this show was very rich, and that’s what I really enjoy—watching TV shows that you can have a rich conversation about afterwards. That’s when the best stories are told.”

Dane Dehaan as the Priest From Fleabag 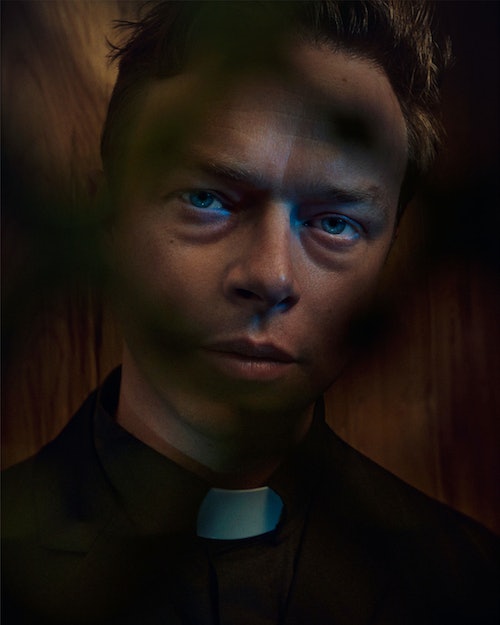 “Part of its genius is saying, two seasons and we’re done,” Dehaan, who stars in Lisey’s Story, says of Phoebe Waller-Bridge’s Fleabag. “That restraint, to tell the story you want to tell and know when it’s over, is amazing. It’s almost theatrical to know when something should be over. I don’t need closure. Life goes on, and I’m more than happy to not know what happens to [the Priest and Fleabag].” 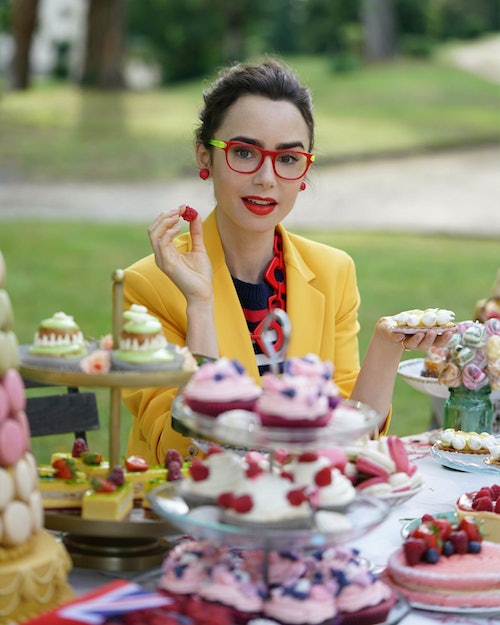 “I love any show about baking and cooking,” says the Emily in Paris star. “I bake a lot of gluten-free, vegan things, which people think sounds not so fun or gross, but I get a kick out of making something with vegan chocolate or more ingredients, and seeing if it works.” 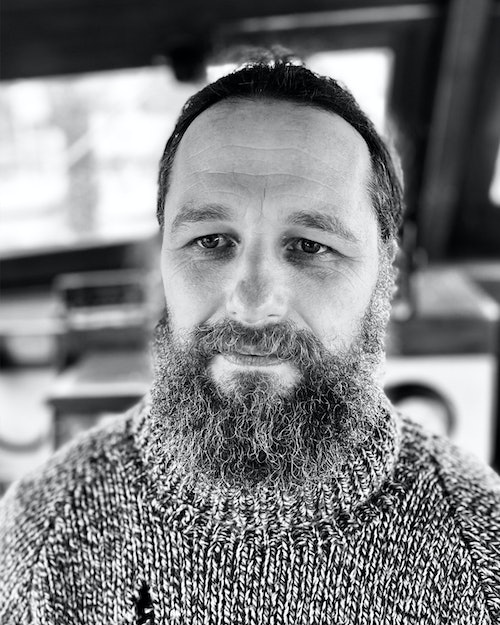 “Three and a half years ago, I saw on eBay that a boat was on sale,” says the Emmy-nominated star of Perry Mason. “It was a Wheeler Playmate, and I knew Hemingway had a Wheeler Playmate. I bought it and restored it over three and a half years, and I painted it the same colors as Hemingway. That’s the boat I took the picture on. That was my ode to Papa.” 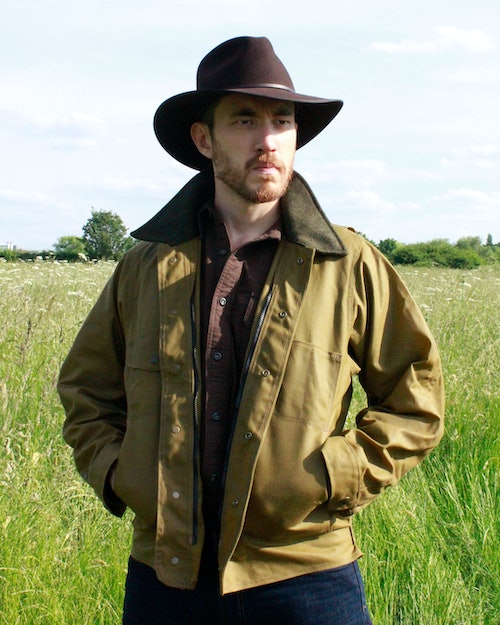 “I’m not very good at watching TV,” says the Warrior star. “Once you get into the industry and you see how things are made, it kind of ruins things. But I got completely immersed in Ozark. It felt the same way when I used to watch Philip Seymour Hoffman or Heath Ledger, Daniel Day-Lewis or Marlon Brando, back in the day.” 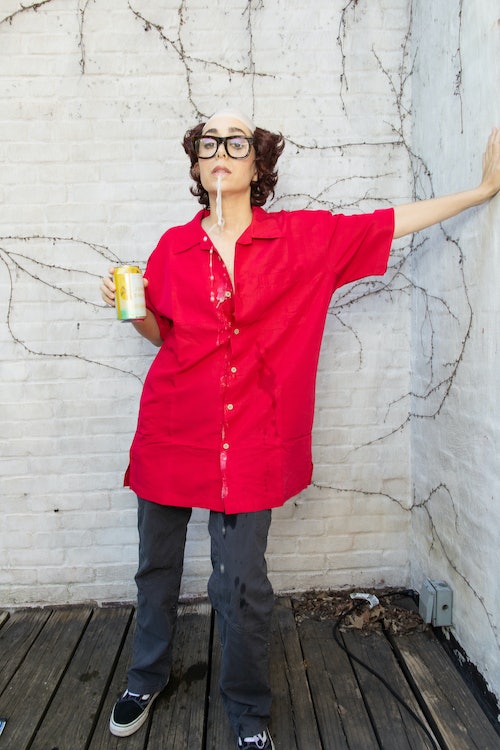 “Danny DeVito’s performance in It’s Always Sunny is one of the most demented performances I’ve ever seen,” says the Made for Love star. “The things he’s doing are so almost avant-garde in their rancidness.”

Madison Lintz as Fleabag From Fleabag 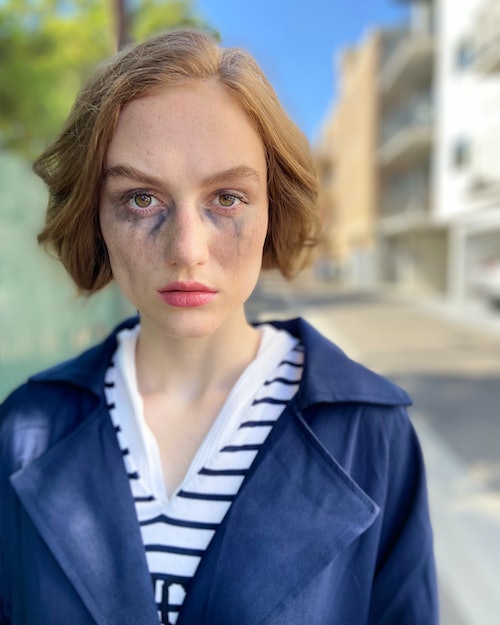 “She’s trying really hard,” says the Bosch star of Phoebe Waller-Bridge’s Fleabag. “I don’t think I’m that big of a screwup, I really don’t, by no means. She just seems so lost in the world, and living in L.A., it’s so easy to feel like that. There are things that are going good in her life; there’s just still that thing that she’s missing. I think, in a lot of ways, every human has that journey.”

Christopher Meloni as a Race Car Driver From Formula 1: Drive to Survive 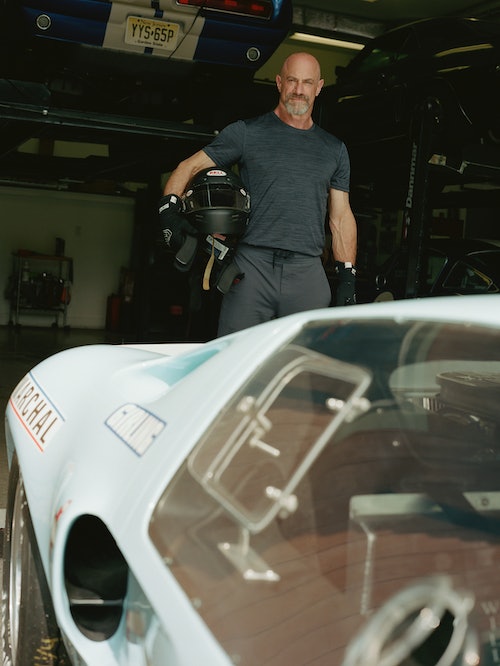 “I tend to become kind of obsessive about stuff that I get into,” Meloni tells actual world-famous F1 driver Lewis Hamilton. “I really didn’t know about Formula 1. A friend turned me on to the series. I got to tell you, man, it’s one of these few shows that absolutely educated me and introduced me to a world that I had no idea about.” 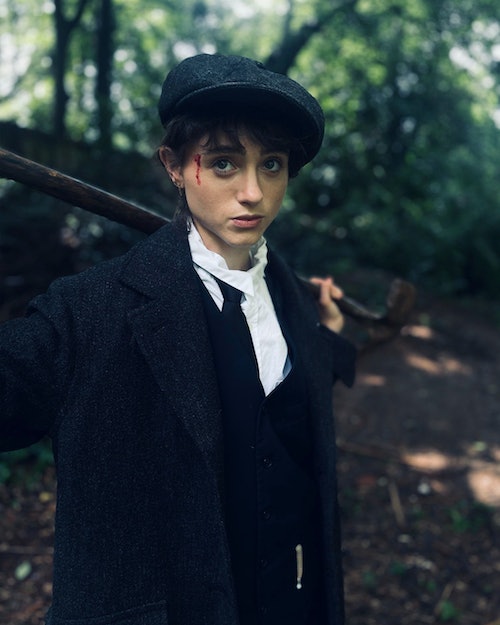 “Beautiful, striking,” the Stranger Things star says of Cillian Murphy on Peaky Blinders. “Those cheekbones? Those eyes? Oh my God. And Tommy Shelby is such a mesmerizing, quiet performance. When he’s on, he just commands the screen—you want to know everything about him, and you get why other characters are drawn in.”

Denis Avahttps://bizgrows.com/
Denis Ava is mainly a business blogger who writes for Biz Grows. Rather than business blogs he loves to write and explore his talents in other niches such as fashion, technology, travelling,finance,etc.
Previous articleSamara Weaving on Playing an Influencer in ‘Nine Perfect Strangers’
Next articleBella Hadid is Taking Vacation Style to the Next Level