HMRC has established an effective programme encouraging residential property landlords to disclose their income and rectify their tax issues.

Let Property Campaign permit you to report your income to HMRC, suspecting you of tax evasion and initiating tax investigations. Voluntary disclosure is the most effective strategy to lessen the penalty HMRC would have levied if they had conducted the tax investigation and detected the disparity.

Unprompted disclosure is usually preferable to HRMC discovering tax compliance issues and underpaid tax, but how can you make a voluntary tax disclosure to HMRC?

You are obligated to inform HMRC of any unpaid tax if you have a tax liability based on the obligations under Let Property Campaign. HMRC provides you 90 days to report any undeclared revenue, such as unreported letting income, arising tax, and interest and penalties. Ensure that you only submit your disclosure after thoroughly checking that it is comprehensive and correct and that you understand why you are being penalised.

How to Make a Voluntary Disclosure Under Let Property Campaign?

You need to inform HMRC that you intend to come clean and make a disclosure. If the HMRC needs more information from you, provide it with as much assistance as possible. 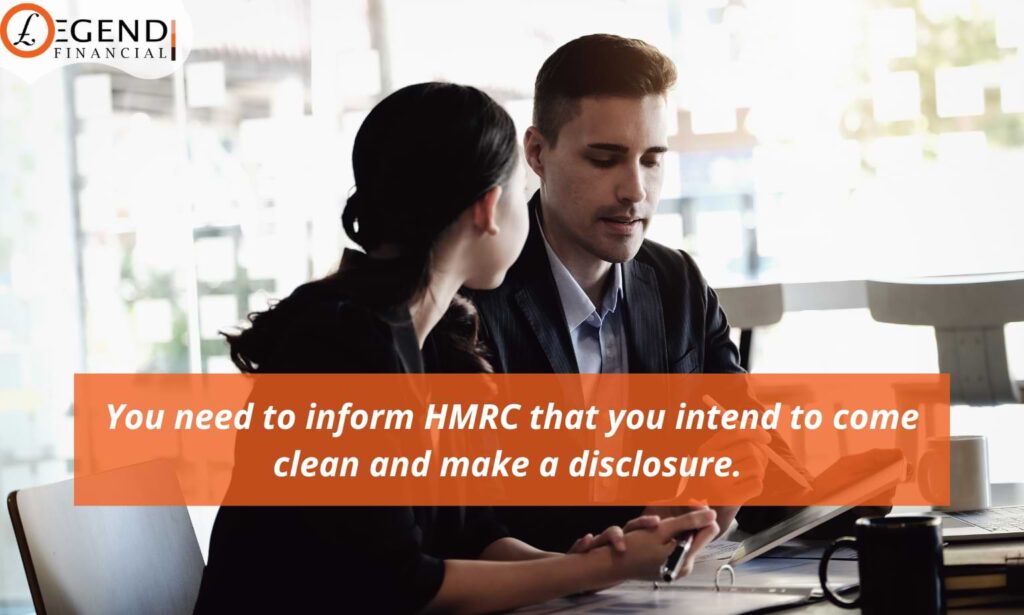 After that, HMRC will send a letter informing you of your personal Disclosure Reference Number (DRN). You are permitted to reveal information as soon as you have obtained your DRN; however, you are required to submit disclosure within 90 days of receiving your notice’s acknowledgment.

You can disclose the following:

You must pay what you owe when you submit your disclosure. Make certain that HMRC receives both your disclosure and payment by the date specified on the notification acknowledgment you received. If you cannot pay your debt by the deadline, you must have made payment arrangements with HMRC by that deadline.

If you don’t do this, you won’t be able to disclose as part of the Let Property Campaign, and you won’t receive the certainty of the terms and conditions included in it.

What Does HMRC Do After Receiving Your Voluntarily Disclosure Under Let Property Campaign?

HMRC anticipates accepting the vast majority of disclosures. In most situations, the HMRC will accept it as soon as possible if they determine that you have provided complete disclosure after doing their checks.

When HMRC receives your disclosure, they will promptly provide you with an acknowledgment. Contact the HMRC helpline if you have not received an acknowledgment within fourteen days of submitting your tax return.

HMRC anticipates that most disclosures will be self-explanatory, but it may need to contact you or your tax advisor to explain some issues. For HMRC to determine whether or not your disclosure is complete, they may require you to provide evidence of your circumstances. Your full cooperation is a prerequisite for taking advantage of this opportunity. If you do not comply with HMRC in any way, there is a chance that they will jeopardise the acceptance of your offer.

HMRC is going to look into all of the disclosures. Once all of those inspections are finished, HMRC will decide to accept your disclosure, and they will write you a letter accepting your offer. 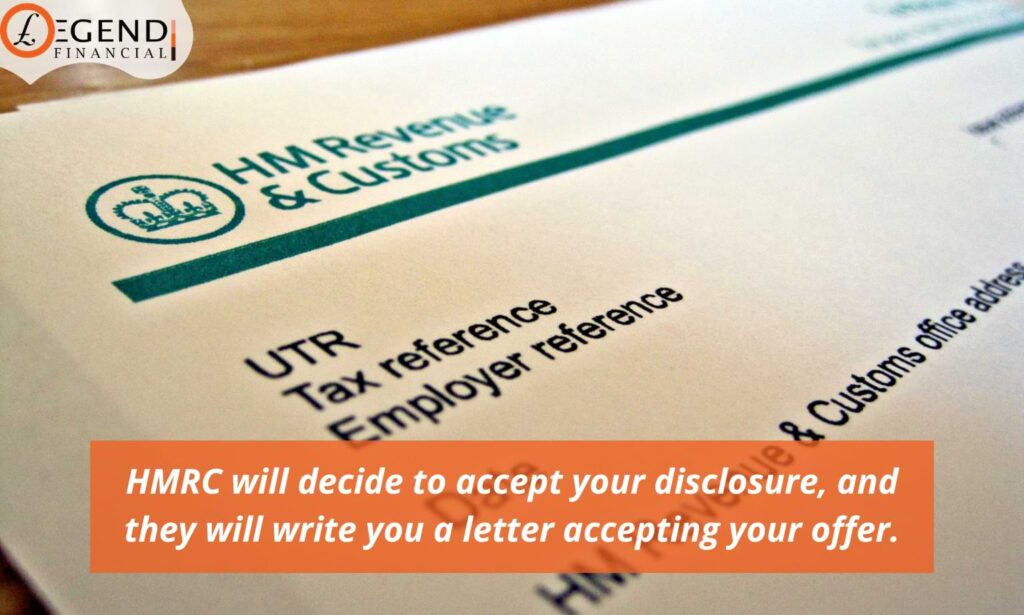 HMRC will notify you if they cannot accept the disclosure. If, as a result of their investigations, HMRC determines that a disclosure contains serious inaccuracies, they will investigate the possibility of charging significantly higher fines.

Additionally, according to the HMRC Criminal Investigation Policy, it is conceivable that an incomplete disclosure could be taken into consideration in rare situations. In situations like this, the information included in the disclosure can be considered admissible evidence.

Disclosures found to be primarily incorrect or incomplete after HMRC conducts a check on them will not be accepted.

Disclosing all relevant information impacts the level of penalty HMRC intends to impose due to the investigation.

Where the HMRC has reasonable grounds for suspecting that the money in question is the product of major organised crime, It will not accept disclosures concerning such money. VAT fraud, fraud involving false registrations for VAT, fraud involving organised tax credit schemes, and instances when there is greater criminality, such as an active police investigation, are examples of this.

HMRC cannot offer immunity from prosecution, but whether you have made a complete and unprompted disclosure of any funds evaded or illegally reclaimed is an essential element in deciding whether to conduct criminal investigations into instances of tax fraud.

If, after submitting your disclosure, you realise that you forgot to include something, you need to notify HMRC as soon as possible so that they may make the necessary amendments.

If the HMRC comes into possession of information indicating that the information you disclosed was inaccurate, they have the authority to re-examine your financial position regarding taxes. 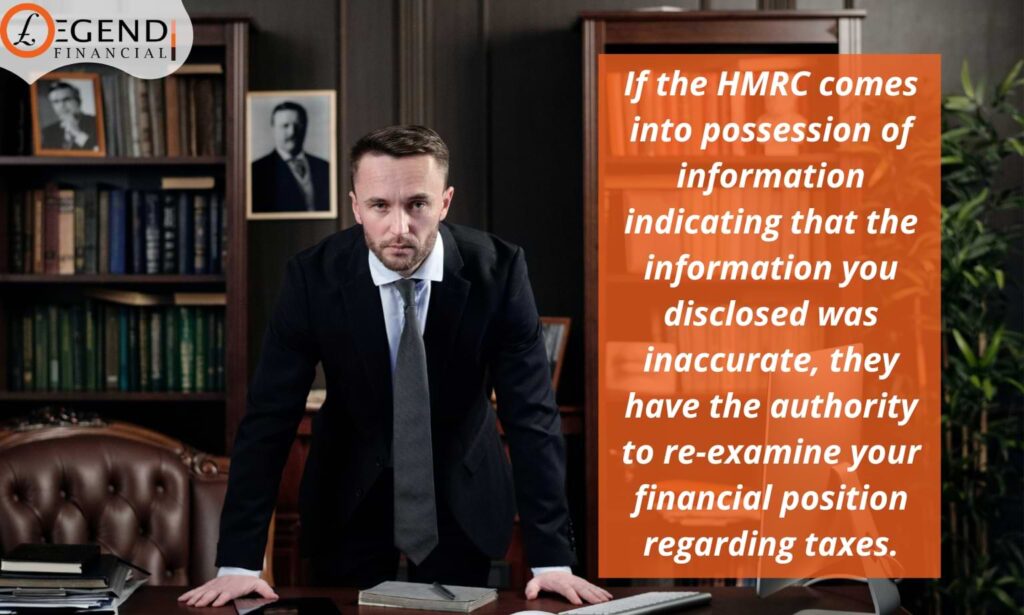 You may receive a letter from HMRC informing you of the information they have obtained, and if required, they will send you assessments to collect any additional tax due. These fines are probably going to be more severe than the ones that the Let Property Campaign offers.

Scenario 7: Getting Information After Acceptance of Voluntarily Tax Disclosure

HMRC will continue to collect new information that may indicate that someone has increased tax liabilities. HMRC will employ this to identify taxpayers for whom a disclosure could have been made or where the disclosure made is not consistent with the information it holds. If it detects that a customer has an additional liability, the behaviour determines the time limits for using this information.

Under some conditions, the HMRC has the authority to reveal the identities of individuals who have been penalised for deliberately evading their tax liabilities. You will receive the maximum reduction of any applicable penalties for the disclosure quality if you come forward voluntarily. It will not publish your details as long as you fulfill the following conditions:

If you do not complete these steps, HMRC may add your name to a list of people who have intentionally avoided their tax obligations.

How does Legend Financial assist?

The team at Legend Financial is adept at advising customers on how to bring their tax matters up to date while ensuring that HMRC applies its authority fairly. Numerous clients and their representatives have collaborated with tax specialists from Legend Financial to bring historical tax concerns up to date.

Denis Avahttps://bizgrows.com/
Denis Ava is mainly a business blogger who writes for Biz Grows. Rather than business blogs he loves to write and explore his talents in other niches such as fashion, technology, travelling,finance,etc.
Previous article
Cineworld boss insists: We are NOT in our own disaster movie
Next article
Rolls-Royce reveals a new Spirit of Ecstasy for its electric-only cars